Heartland Film, Inc., an innovator in the film industry, has selected film winners across seven categories for their Indy Shorts International Film Festival, Indianapolis’ only short film festival and an Academy Award®-qualifying event. Indy Shorts exclusively features short films 40 minutes or less in length, and with over 150 films shown, the festival is the largest of its kind in the Midwest. The festival is also one of the largest cash awarding short film festivals in North America, bestowing $32,000 in cash prizes across multiple categories.

“We are thrilled about the high quality films we received and were able to showcase during our second annual Indy Shorts,” said Heartland Film President Craig Prater. “The award-winning films that were ultimately selected by our juries represent the powerful filmmaking that we are striving to achieve at Heartland Film. We’re also proud to be able to award these deserving filmmakers with one of the largest cash prize purses in North America.”

Below is a complete listing of the award-winning films, as announced at the Indy Shorts Awards Presentation Saturday, July 27, 2019:

*Indy Shorts is an Academy Award®-qualifying film festival in both the Live Action and Documentary Short Subject film categories, and the winners of the Narrative and Documentary Grand Prizes will qualify for Academy Awards® without the standard theatrical run, granted it meets all the other requirements needed to qualify.

Heartland Film is a nonprofit arts organization founded in 1991 with the mission to inspire filmmakers and audiences through the transformative power of film. Heartland Film is a supporter of purposeful filmmaking, providing an outlet for filmmakers and storytellers from all over the world to be creative and honored for their work. The films selected for the Festival do more than just entertain; they inspire and uplift, educate and inform, and shift audiences’ perspectives on the world. For more information, visit heartlandfilm.org.

Colton Chapman is back at Hunny Creek Haven on Saturday, July 27 for an annual fundraising night of music and fun.

Chapman spoke with Tyson on GIANT fm about Saturday's event. 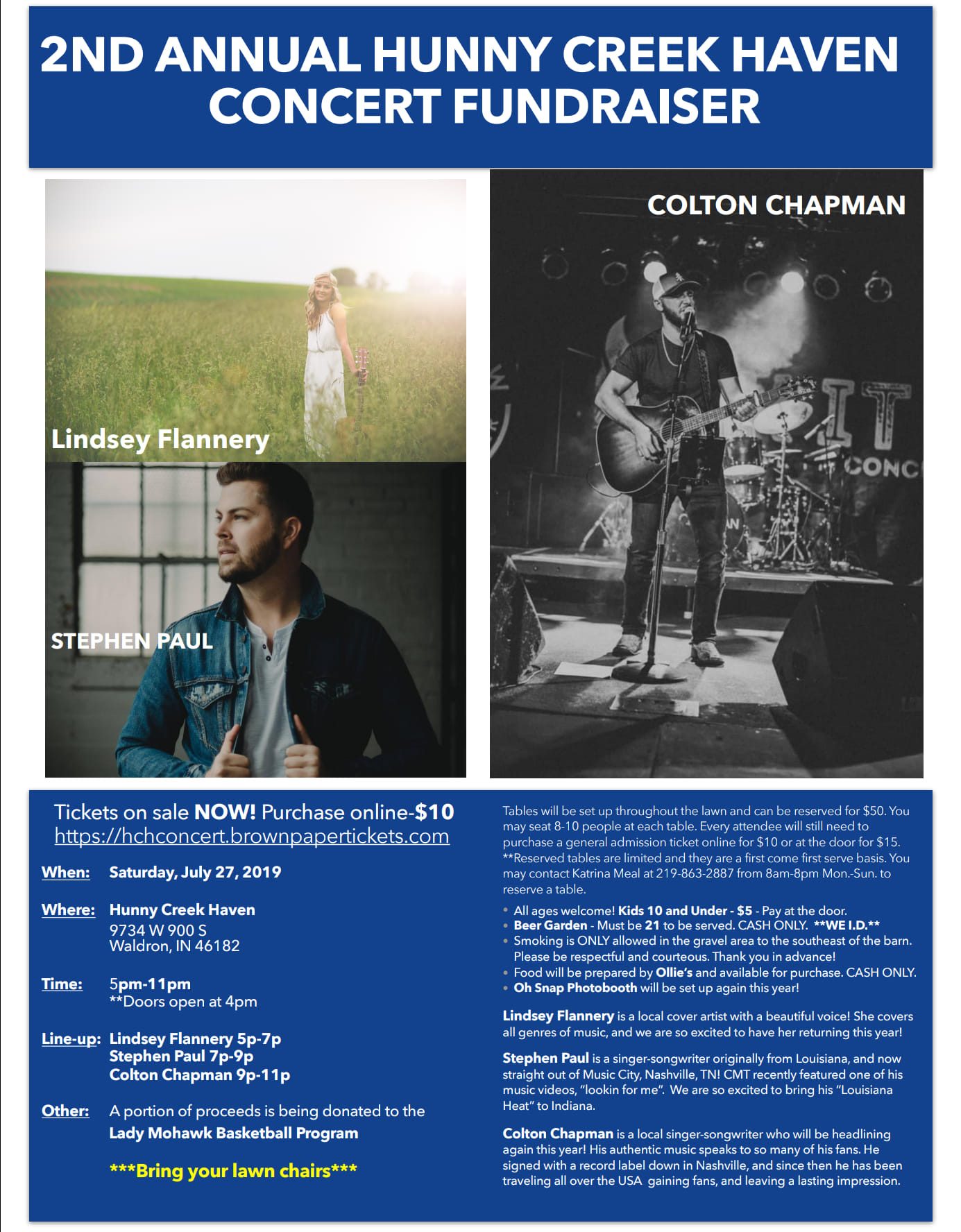 Seven national award-winning barbeque teams will compete at the All-American Ribfest in downtown Indy on July 25-28 to raise money for the Indiana Sheriffs’ Youth Ranch.

“It will be four days of hot and spicy, sweet and tangy, falling off the bone ribs – just the way you love ‘em,” says former Marion County Sheriff John Layton, president of the not-for-profit ISYR.

Layton said “just like on national TV,” rib teams from across the U.S. will offer barbeque pork, beef and chicken, as well as festival favorites like corn-on-the-cob and homemade baked beans topped off with funnel cakes for dessert:

“A $5 general admission will allow access to the American Legion Mall, live noontime and evening concerts, shaded seating, clean restrooms and security,” Stockton said. “Food and beverages are extra, but will be affordably priced.”

The Big Top Circus will perform three shows daily, with seating limited to the first 1,600 people per show. Performances will begin at 1 p.m., 4 p.m., and 7 p.m. Those wanting to secure reserved seating with no wait can purchase a Fast-Pass ticket for only $5 at the circus tent.

This family-friendly experience will be presented in a single-ring and will not include any exotic animals. With Indiana’s rich history of circus entertainment, the Big Top Circus continues to add an exciting element to the 2019 Indiana State Fair with its quick-change artists, muscle men, and beautiful Arabian horses.

The Big Top Circus is excited to welcome back world-renowned performer BELLO NOCK! Often known simply as “Bello”, he is referred to as the “World’s Greatest Comic Daredevil” and has been featured in the Guinness Book of World Records for his nail-biting high wire walk over a cruise ship. Nock brings his unique blend of endearing comedy back to the 2019 Fair with jaw-dropping daredevil stunts that makes him one of the most exciting live performers in the world today!

Multi-talented singer, composer and congenial host, DINNY MCGUIRE, will serve as the "Master of the Ring". Celebrating eight national tours with The Greatest Show on Earth and several tours with the renowned New York's Big Apple Circus, he brings his unique talent and mastery to this year's Indiana State Fair!

Renowned a cappella group Straight No Chaser, who were at the forefront of the pop culture a cappella movement more than a decade ago with their breakthrough album Holiday Spirits, have announced plans to tape their third national television special, following the success of their prior PBS specials “Live in New York” and “Songs of the Decades.” “Back Home Again,” scheduled to begin airing nationwide this fall, will find the nine members returning to Indiana, where their story began, to capture a one-night-only performance at the iconic Murat Theatre.

A pre-sale will begin Thursday, July 11 at 10 a.m. ET, and any remaining tickets will go on sale to the general public at noon on Monday, July 15. For all details, visit sncmusic.com.

The taping will provide a sneak preview to the 2019 edition of the group’s annual fall tour.  Kicking off October 25 in Biloxi, MS, the two month long trek includes four performances at the Murat Theatre December 7-8.

Straight No Chaser’s latest studio album, “ONE SHOT“ is available now HERE. The album showcases the group’s signature takes on classic pop and soul favorites, including Ricky Martin’s “Livin La Vida Loca,” Fleetwood Mac’s “Go Your Own Way,” James Brown’s “Papa’s Got a Brand New Bag,” and the LP’s first single, an energetic mash-up of Boyz II Men and Montell Jordan’s “Motownphilly/This Is How We Do It.”

Following an unlikely discovery of a nine-year-old video of the group’s version of “The 12 Days of Christmas” by Atlantic Records Chairman/CEO Craig Kallman, Straight No Chaser subsequently became one of the first a cappella groups to sign to a major label and carved the path for the pop culture phenomenon that the genre has become.  Since the 2008 release of their first album, Holiday Spirits, the group has sold more than 1.6 million albums in the US alone, with that album and their second holiday album, Christmas Cheers, earning gold certification and reaching the top slot on the holiday charts at Amazon and iTunes.

UNDER THE STREETLAMP comes to Anderson for one night only, Friday, July 19. Audiences are invited to experience an unforgettable evening where they will hear classic hits from the American radio songbook. Tickets are available online at http://www.theandersonparamount.org/ or by calling the box office at (765) 642-1234.

UNDER THE STREETLAMP was founded in 2009 by leading cast members from the Tony-Award® winning sensation Jersey Boys. Since their origination, the group has performed in multiple televised PBS specials with coverage across the US and Canada.

UNDER THE STREETLAMP has taken their remarkable show to venues in 105 cities across 48 states and 6 countries. During their impressive time on the road, UNDER THE STREETLAMP has partnered with some of the world’s most prestigious symphony orchestras including The Cleveland Pops Orchestra, The Nashville Symphony, The Detroit Symphony, The Desert Symphony in Palm Desert and many more.

Current company members of UNDER THE STREETLAMP include Eric Gutman, David Larsen, Brandon Wardell, and Shonn Wiley. Each performer carries with him an impressive list of credits. Between them, they have appeared on Broadway, in feature films and on television – including special appearances during the New Year’s Eve celebration in Times Square, on “The Tonight Show,” “The Primetime Emmy Awards,” “The Tony Awards, “The Oprah Winfrey Show” and in hit musicals including The Book of Mormon, Jersey Boys, 42nd Street, Thoroughly Modern Millie, Good Vibrations and Billy Elliott.