Shelby County's Frontage Road will be closed to traffic Thursday and Friday just east of HIS Constructors for a deep sewer crossing for Central Crane.

Wilson is assigned to Hendricks County where he has served since 2018. Before transferring, he served in Marion County.

The district award puts Wilson in the running for the Pitzer Award, which is presented to the top overall conservation officer in the state and is selected from the 10 district winners.

The Pitzer Award is named after Conservation Officer James D. Pitzer, who was fatally shot while investigating illegal hunting activity on Jan. 2, 1961, in Jay County.

Get a good breakfast and help a good cause this Saturday.

A free-will offering is being taken. 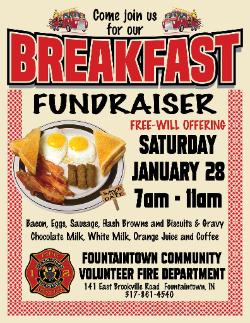 “This is an extremely important tax credit that helps millions of hard-working people every year,” said IRS Acting Commissioner Doug O’Donnell. “But each year, many people miss out on the credit because they don’t know about it or don’t realize they’re eligible. In particular, people who have experienced a major life change in the past year – in their job, marital status, a new child or other factors – may qualify for the first time. The IRS urges people to carefully to review this important credit; we don’t want people to miss out.”

In 2022, 31 million eligible workers and families across the country received about $64 billion in Earned Income Tax Credits, with an average amount of more than $2,000.

The IRS administers the EITC, which Congress originally approved in 1975. It was developed in part to offset the burden of Social Security taxes and provide an incentive to work.

The IRS and partners urge people to check to see if they qualify for this important credit. They also encourage people who don’t normally file a tax return to review whether they qualify for EITC and other valuable credits.

The EITC is a tax credit for certain people who work and have low to moderate income. A tax credit usually reduces tax owed and may also result in a refund. Even though millions of people get the EITC, the IRS estimates that about 20% of EITC eligible taxpayers do not claim it.

Workers at risk for overlooking the EITC include those:

The IRS also reminds taxpayers that the quickest way to get a tax refund is by filing an accurate tax return electronically and choosing direct deposit for their refund. Tax software, tax professionals and other free options can help people see if they qualify for the EITC.

Who can get the EITC?
To qualify, taxpayers must meet certain requirements and file a tax return, even if they did not earn enough money to be obligated to file a tax return. There’s no need to guess about EITC eligibility; find out with the EITC Assistant, only at IRS.gov.

The maximum EITC for taxpayers with no dependents is $560, available to filers with an AGI below $16,480 in 2022 ($22,610 for married filing jointly), and it can be claimed by eligible workers between the ages of 25 and 64. Married but separated spouses who do not file a joint return may qualify to claim EITC if they meet certain requirements.

EITC is for workers whose income does not exceed the following limits in 2022:

How to claim the EITC

Those eligible for the EITC have these options:

The IRS reminds taxpayers to be sure they have valid Social Security numbers for themselves, their spouse if filing a joint return and for each qualifying child claimed for the EITC. The SSNs must be issued before the April due date of the return. There are special rules for those in the military or those out of the country.

While the IRS began accepting 2022 returns on Jan. 23, 2023, the IRS cannot issue a refund that includes the Earned Income Tax Credit or Additional Child Tax Credit (ACTC) before mid-February. This is due to the 2015 PATH Act law passed by Congress, which provides this additional time to help the IRS stop fraudulent refunds from being issued.

Where’s My Refund? should show an updated status by Feb. 18 for most early EITC/ACTC filers. The IRS expects most EITC/ACTC related refunds to be available in taxpayer bank accounts or on debit cards by Feb. 28 if taxpayers chose direct deposit and there are no other issues with their tax return.

Taxpayers are responsible for the accuracy of their tax return even if someone else prepares it for them. Since the rules for claiming the EITC can be complex, the IRS urges taxpayers to understand all of them.

The fair is for all Vietnam Era, Gulf War Era, and Post-9/11 veterans.

The PACT Act is a historic new law that expands VA health care and benefits for Veterans exposed to burn pits and other toxic substances.

Any Veteran or survivor can learn more about the PACT Act by visiting VA.gov/PACT or by calling 1-800-MY-VA-411.

Governor Eric J. Holcomb is directing flags to be flown at half-staff in honor and remembrance of the victims of the tragedy in Monterey Park, California.

Flags should be flown at half-staff at the Indiana Statehouse until sunset on Thursday, Jan. 26, 2023.

Gov. Holcomb also asks businesses and residents to lower their flags to half-staff.

The Indiana Department of Revenue (DOR) will start accepting filings for the 2023 individual income tax season on Monday, Jan. 23, 2023, in concert with the Internal Revenue Service (IRS).

Customers will have until Tuesday, April 18, 2023, to file both their state and federal 2022 tax returns and pay any taxes owed.

While Indiana tax forms for the upcoming individual income tax season are now available online, DOR is reminding Hoosiers to wait to file their tax returns until they receive their official tax documents and statements. Attempting to file without all documents can delay the process and ultimately postpone any refund a customer may receive. All employers are required to provide Form W-2s to employees by Jan. 31, 2023.

While most Hoosiers received their Automatic Taxpayer Refund(s) via check or direct deposit in 2022, many elderly and disabled individuals who did not receive direct payment may be eligible to claim a $200 tax credit. Visit dor.in.gov for eligibility and filing information.

Eligible taxpayers may be able to file their federal and state taxes for free through the INfreefile program. Participating vendors and eligibility requirements are available at freefile.dor.in.gov. Additional information on individual income tax filing, including FAQs, tips and resources for free and low-cost tax preparation help are available at dor.in.gov/individual-income-taxes.

DOR says that the answer to most common tax questions can be found online through dor.in.gov. Customers who wish to contact DOR directly should use the secure messaging portal in INTIME for the most efficient service. INTIME registration takes just a few minutes for most users.

As we enter the new year, Shelby County Purdue Extension is excited to introduce a new program- RT2: Read, Taste, and Touch.

The primary purpose of RT2 is to promote reading, good nutrition, and agriculture awareness among preschool and early elementary aged children. RT2 encourages parents and others to take time out of their busy day to enhance a child’s learning experience.

How does it work? First, register for the program which can be done by collecting the form from the Extension office. You will receive a monthly “RT2 Activity Newsletter” via mail or email, that features a new book each month. Then read with your child and work together on the activities.

RT2 participants will be notified about special events through the year, including a two-day celebration during the Shelby County Fair.

Have questions? Contact the Purdue Extension office in Shelby County at 317-392-6460 or email york40@purdue.edu!

Movie buffs can sign up for a Film Appreciation Series on Orson Welles or Pre-Code Hollywood, before censorship took hold.

Classes are free for library patrons, but they must register to get class materials. Classes will meet through Zoom, and codes are needed. 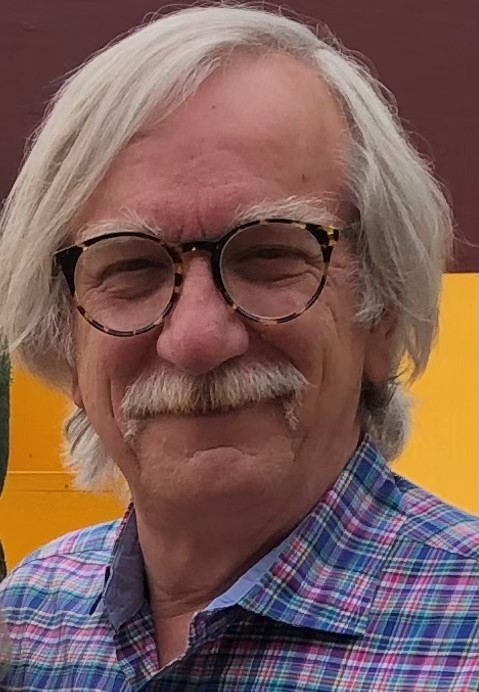 All classes meet by Zoom; patrons will need a code for the Zoom classes.

Students will watch an assigned film before each class session, and discussion takes place during class. All titles will be available in the library for short-term checkout. Links to films online will also be provided.

Check the library website for the lists of films for each class.

To register, email Michael Daniels at mdaniels@sscpl.lib.in.us or sign up in the library to receive Zoom credentials and course materials.

Field has practiced law in Chicago for 25 years, but he is in his 15th year of teaching film classes through City Colleges of Chicago. Shelby County Public Library is proud to partner with Field to offer college-level classes free to the community.

The Shelby County Emergency Management Agency is pleased to announce that a date has been set for the NWS Weather Spotters Class.

The class will be held at the Shelbyville F.O.P. Lodge 84 located at 1237 N. Knightstown Road. There is no charge to attend this class.

**PRE-REGISTRATION IS REQUIRED FOR THIS EVENT**

Please go to the Shelby County Emergency Management Agency-Indiana Facebook Page to register for the event.

The deadline for registering is 4:00 PM on Wednesday, February 22.

Feel free to contact the Shelby County Emergency Management Agency at 317-392-6308 or scema@co.shelby.in.us if you have any questions.

Live Christmas trees can be dropped off at the following locations free of charge:

All live tress must be free of all decorations and stands.

The Indiana Family and Social Services Administration Office of Early Childhood and Out-of-School Learning, in partnership with the Indiana Department of Education Office of Kindergarten Readiness, has been awarded a $42 million federal grant.

These dollars will be used over three years to implement programmatic changes that will improve Indiana’s capacity to recruit early educators, increase access to early learning opportunities for students in unserved areas and ultimately, support families as they make important decisions regarding their child’s education.

The three-year grant from the U.S. Department of Health and Human Services will award $14 million annually to FSSA, which partnered with the Indiana Department of Education on the grant application.

Combined with FSSA’s $4.2 million annual investment as matching funds required by the grant, $54.6 million will be leveraged in total to accelerate and build Indiana’s capacity to implement long-lasting change, including:

The funding will build upon key work already underway to improve the early learning infrastructure in Indiana. New state legislation championed by Gov. Eric J. Holcomb restructured and expanded Indiana’s Early Learning Advisory Committee, and Gov. Holcomb also launched a new Office of Kindergarten Readiness within IDOE to work in partnership with OECOSL to ensure the early learning experiences children receive are effectively readying them for school. In September 2022, new early learning policy goals were established by ELAC to ensure Hoosier children, especially those most underserved, have access to early learning opportunities that prepare them with the skills required to thrive in kindergarten.