The 44th-annual Bands of America Grand National Championships, presented by Yamaha, culminates the 2019 Bands of America season that begin in September with a total of 23 championships from coast-to-coast featuring more than 130,000 teen student performers.

Bands of America is a program of Music for All, headquartered in Indianapolis. The national championship event will feature 90 high school marching bands in two days of preliminary competition. Thirty bands from Thursday and Friday’s preliminary competition will advance to Saturday’s Semi-Finals. The top 12 scoring bands on Saturday will move on to the evening Finals competition, where the Grand National Champion will be named.

Music for All is about building leaders and celebrating teachers. Foremost, Grand Nationals is an educational performance experience. A panel of nationally-recognized music educators and marching arts experts will evaluate the performing bands, offering recorded comments to help the music educators continue to improve their ensembles, in addition to the ranking and rating on a national level.

With more than 1.5 million music students impacted by Music for All’s programs since 1975, Bands of America Championships are a celebration of music education at its finest, showcasing excellence, teamwork, and leadership. In addition to the performances, Grand Nationals includes an Expo, a student leadership workshop, and special events, like the Future Music Educators Experience. Tens of thousands of participants and spectators are expected to attend, with thousands more watching the event’s live stream on FloMarching.com.

In addition to Grand Nationals, the Bands of America Indianapolis Super Regional was also recently at Lucas Oil Stadium on October 25-26.

“Bands of America Championships are programs that support Music for All’s mission to create, provide, and expand positively life-changing experiences through music for all,” according to Eric L. Martin, President and CEO of Music for All. “Active experiences in music and the arts are integral to providing students with a well-rounded education, and the Grand National Championships are a pinnacle experience for the bands. The performances of students at the Bands of America Grand Nationals showcase the results that come from the dedication and teamwork necessary for the achievement of excellence, on the performance field and in life beyond. Bands of America events advocate for maintaining and growing our national commitment to music and arts education, with the student performers making the case in the most visible, artistic, and entertaining way possible, something each and every American should witness and experience.”

The Grand National Championships preliminary competition begins on Thursday, Nov. 14 at 9:15 a.m. and will conclude at 10 p.m. The preliminary competition resumes on Friday, Nov. 15 at 8 a.m., and concludes at 8 p.m., with an exhibition performance by the Spartan Marching Band of Michigan State University, followed by the awards ceremony. Gates will open for the Semi-Finals competition on Saturday, Nov. 16 at 6:30 a.m., with performances beginning at approximately 7 a.m., and will conclude at 5:30 p.m. Gates open for the Finals competition on Saturday, Nov. 16 at 6:30 p.m., with performances beginning at 8 p.m. All times are tentative pending the final schedule of performing bands. Current times will be listed at marching.musicforall.org.

Paige’s Music and Chops Percussion of Indianapolis is the Official Music Store of the event.

Friday evening’s festivities will include the presentation of the Patrick John Hughes Parent/Booster Award, a national award honoring an outstanding band parent and supporter and named in honor of Louisville resident Patrick John Hughes, co-author with his son Patrick Henry of “I Am Potential.” This year’s Friday award ceremony will also include the first presentation of Music for All’s newly-established President’s Award, to Matthew B. Carter, Vice President of Destination Development, Executive Director, Music Crossroads, and former Chairman of the Board of Music for All; Michael Fox, former Lucas Oil Stadium Director and Indianapolis Motor Speedway Senior Director of Facilities and Planning; and Barney Levengood, former Executive Director of the Capitol Improvement Board in Indianapolis.

Tickets are available for the Grand National Championships at Ticketmaster.com, Ticketmaster by phone and at the Lucas Oil Stadium ticket office. Tickets for the four days of events range from $15 to $135. See all ticket prices at marching.musicforall.org. Children ages 10 and under are free for general admission seats. A $5 off any general admission ticket (individual Preliminaries and Semi-Finals) discount will be available at the gate for college students with an ID, spectators 11-18 years of age, military members and spouses (military ID required), and spectators age 62 and over.

About Music for All

Since 1975, Music for All has been a destination and set the standard for scholastic music ensemble performance and music education advocacy. As a 501(c)(3) nonprofit educational organization, Music for All’s mission is to create, provide, and expand positively life-changing experiences through music for all. Music for All’s vision is to be a catalyst to ensure that every child in America has access and opportunity for active music making in his or her scholastic environment. Music for All’s advocacy efforts inspire and develop models and strategies for successful music programs, through programs like its Advocacy in Action Awards, the I-65 Corridor Project, and support of Indianapolis Public Schools, the Central Indiana Track Show Association, and Indiana State Fair Band Day, and programs like United Sound and Be Part of the Music. Music for All’s programs include more than 45 annual events, including the Bands of America Grand National Championships and Regional Championships for marching bands; the Music for All Summer Symposium camp for students and teachers; the Music for All National Festival for bands, orchestras, choirs, percussion and chamber ensembles; Affiliate Regional Music Festivals held across America; and national student honor ensembles including the Bands of America Honor Band that will march for the fifth time in the Rose Parade® in 2021.

Tickets will go on sale this Friday, October 18 at 10 a.m. and will be available at www.browncountymusiccenter.com and at www.ticketmaster.com, and the venue box office.

About Richard Marx: As a performer, songwriter and producer, Richard Marx's nearly three-decade-long career has had innumerable highlights. The Chicago native has sold more than 30 million albums worldwide, starting with his self-titled debut which went to #8 and spawned four Top 5 singles, including the chart-topping "Hold on to the Nights," with "Don't Mean Nothing" earning him a Grammy nomination for Best Male Rock Vocal Performance. The follow-up, 1989's Repeat Offender, was even more successful, hitting #1 and going quadruple-platinum with two #1 singles in "Satisfied" and "Right Here Waiting." When both Rush Street (with two #1 AC hits in "Keep Coming Back" and "Hazard") and Paid Vacation (with its #1 AC hit, "Now and Forever") went platinum, Marx achieved a seven-year string of triumphs that rivaled any in pop-rock music history. To this day, he is the only male artist in history to have his first seven singles reach the Top 5 on the Billboard charts.

For most artists, that would be impressive enough -- but Richard Marx didn't stop there, launching a second, very successful, incarnation as a songwriter and producer, with songs like "To Where You Are," the first hit single from Josh Groban's debut album, as well as the NSYNC smash, "This I Promise You." He went on to earn a 2004 Song of the Year Grammy for co-authoring Luther Vandross' "Dance with My Father." Across all formats, Marx has scored an amazing total of 14 #1 singles (including Keith Urban's #1 smash "Long Hot Summer") both as a performer and songwriter/producer, making him a true multi-talented threat who continues to challenge himself and his fans. He has also written with Jennifer Nettles, Sara Bareilles and Vince Gill. He holds the honor of being one of a handful of artists who have had a number one hit in each of the past four decades.

Richard has made a commitment to several different causes, from donating the royalties from his hit single, "Should've Known Better," to build a room at the NYU Medical Center for pediatric cancer patients, to his recording of "Children of the Night," which brought attention to the plight of homeless children on the streets, raising more than $500k for the Children of the Night Foundation. Marx has also performed benefit concerts over the years for the TJ Martell Foundation, Toys for Tots, Make a Wish Foundation, the American Cancer Society, Best Buddies and the Special Olympics. Richard and his band entertained the U.S. troops stationed in Germany and, since 2008, he has hosted an annual event in Chicago for the Ronald McDonald House Charities, the first of which featured a concert by Richard and Kenny Rogers. Richard has also organized an annual all-star benefit concert for the Cystic Fibrosis Foundation, raising more than $4 million for research to cure the disease.

About the Brown County Music Center (opened August 2019): Located in Nashville, Indiana, the Brown County Music Center is a visual and auditory masterpiece with cutting edge design that will
bring in nationally known performers and host local events. The new 2000-seat live performance venue offers an incredibly intimate experience for each show. The farthest seat from the stage is only 106 feet away. Nestled on the banks of Salt Creek and located less than one-mile from the largest state park in Indiana and the Village of Nashville, this indoor entertainment venue will host world-class rock, blues, country, pop, jazz, oldies, throwback artists, and more.

Comedian Michael Malone is on the stage at The Strand on Saturday, October 12, at 8 pm.

He visited with The Morning Show Thursday. 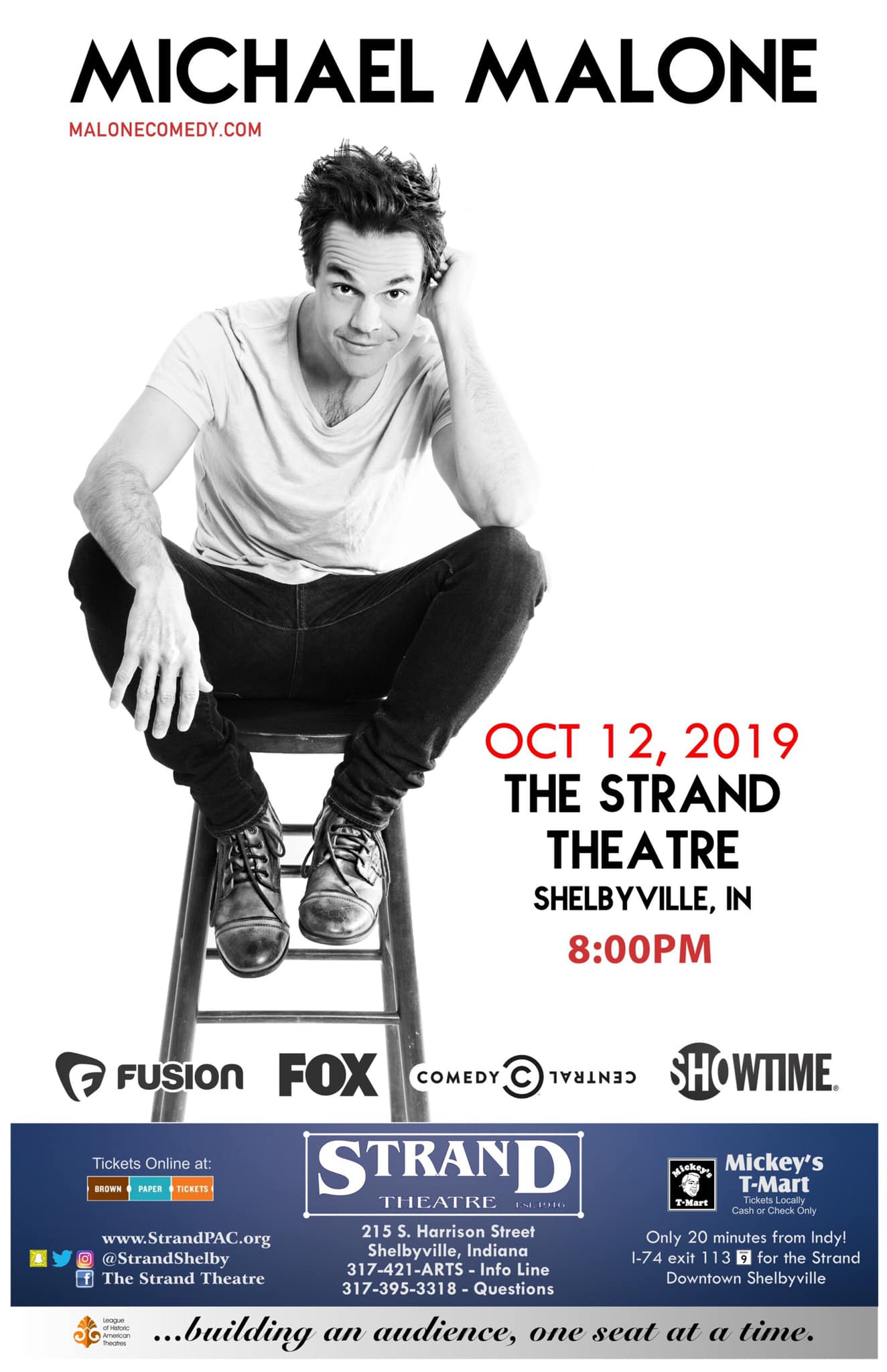 Coffee Classical Series performances feature complimentary pastries plus an hour of classic music, doors open at 10 a.m. for these shows.

For Lilly Classical Series performances, doors open one hour and fifteen minutes ahead of show time.

Tickets range from $10 - $89 and are on sale now at indianapolissymphony.org.