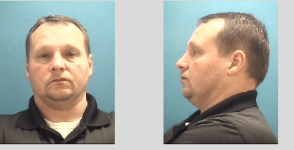 During the investigation, it was determined that Lieutenant Dan Meister and Sergeant Ron May allegedly worked an off duty job providing security at Columbus Regional Hospital while on duty with the Columbus Police Department.  The investigation indicated that between February 2015 and August 2018, Meister and May allegedly worked overlapping shifts for both Columbus Police Department and Columbus Regional Hospital.  Both officers were paid by CPD and CRH for the same hours worked on numerous occasions.

At the conclusion of the case, the investigation was turned over to a special prosecutor that was assigned in this case.

Today, warrants were issued for both Meister and May on charges of Official Misconduct, Ghost Employment, and Theft.  They were both arrested this afternoon without incident and remanded to the custody of the Bartholomew County Jail.

Both will soon face initial hearings in Bartholomew County.