Thanks to a generous donation, the Greenfield Police Department is the new owners of five new Cardiac Science AED's in the event of a cardiac emergency while on patrol.

The AED's were made possible through a generous donation from AP Engineering and Consulting, of Greenfield.

Capt. Chuck McMichael, of the Greenfield Police Department, tells Giant FM the department has had AED's in vehicles for about 15 years.

"All of our officers are trained and certified in CP and AED use, so it is an invaluable tool for us. In most medical emergencies, we are able to respond to the scene faster than our EMS partners due to being mobile throughout our shifts," McMichael said. 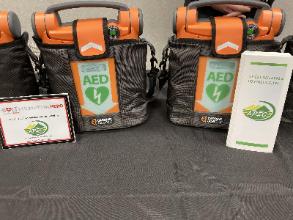 The AED's will work with the EMS equipment to help provide a smooth transition, according to McMichael.

While GPD does not keep track of data for when the AED's are used, McMichael told Giant FM the number of deployments are "easily in the hundreds for our officers."

The Indiana Department of Workforce Development, WorkOne Central and the Greenfield Area Chamber of Commerce are hosting a virtual job fair highlighting dozens of job openings in Hancock County.

Participating employers will include BWI, Spectra Premium and Yamaha.

A variety of positions are available at each company. Presenters from each will discuss job opportunities in detail, along with benefits and how to apply.

“Virtual job fairs offer employers and jobseekers a safe and effective way to make an employment match,” said Lance Ratliff, executive director of the Region 5 Workforce Board. “Local employers continue to struggle to find employees for their many open positions. The virtual job fair platform provides another means for recruiting as well as saving time and expense for all involved.”

Those interested in the job fair but unable to attend are encouraged to still register, as a recording will be sent via email the following day.

After registering, a confirmation email will be sent containing information about joining the webinar.

While one Hancock County school district looks forward to enacting a new schedule that will bring students into the building more, another is going back to virtual learning beginning Oct. 9.

Officials with the Community School Corporation of Southern Hancock County alerted parents Thursday afternoon that due to the district’s current Covid-19 situation, which includes five positive cases across the district and the potential for active community spread, the Hancock County Health Department has recommended that New Palestine High School switch to virtual learning on Oct. 9.

While the rest of the schools in the district will be in the classroom on Oct. 9, all New Palestine schools will transition to virtual learning from Oct. 19 until Oct. 23 when students return from fall break. At this time, in-person classes will resume on Oct. 26, according to Wes Anderson, community relations and communications director for the district.

Anderson told Giant FM that the virtual instruction will be a full-day worth of instruction for students.

According to Greenfield-Central officials, there has not been a positive case among students in the last six weeks.

The moves by the school districts comes on the heels of another Covid-19 related death in Hancock County, bringing the total number of deaths related to the disease to 44.

Law enforcement agencies from around Hancock County are currently seeking a wanted felon who fled from police on foot Thursday.

Officers from the Hancock County Sheriff's Department, Indiana State Police, Greenfield Police and the Johnson County Sheriff's Department are seeking Michael Riddle, 37. Riddle, who is a resident of Edinburgh, is described as armed and dangerous and is a white male standing 5-feet-7-inches tall and weighing 165 pounds with brown hair and blue eyes. He was last seen wearing a blue T-shirt and black sweatpants.

Police are asking anyone who lives in and around the area of County Road 300 North and County Road 125 West to remain indoors, make sure their homes and windows are locked and report any suspicious activity immediately by calling 911.

Riddle is wanted for failure to appear to a sentencing hearing in Johnson County on charges of dealing meth.

Chris Lytle has always been a fighter.

From making a name for himself inside the octagon in UFC to promoting anti-bullying to fighting fires as a member of the Indianapolis Fire Department, Lytle has put himself forward to fight. And, that continues albeit in a different format, as Lytle was selected this week to fill a vacancy on the New Palestine Town Council.

Lytle was the only person to fill out the paperwork and meet the requirements by the Hancock County Republican Party and will fill a vacancy left by Jan Jarson, who resigned her seat last month under a cloud of impropriety and questions.

“This is fantastic. I’ve been involved in other ways, volunteered in the wrestling program, done the anti-bullying program, but this is an opportunity to help the area I live in. I am excited to be in there and excited to do what I can to see New Pal get what it needs to move forward,” Lytle told Giant FM moments after being sworn in.

This is not the first time Lytle has thrown his hat into the political ring, as he ran for the Indiana State Senate in 2012, finishing second to Michael Crider in a three-person Republican Primary with 30.1 percent of the vote.

During that race, Lytle billed himself as a fighter for Indiana.

While the landscape has changed, Lytle maintains his purpose has not, telling Giant FM he will continue to fight.

“This is different to me. This is very local and it is the primary area I live in. It’s been driving me nuts the last few months seeing people waste taxpayer dollars and what has happened in New Palestine with people in public service only for their benefit. I decided I wanted to do something about it. I love my town and the area I live in,” said Lytle, who moved his family to New Palestine 15 years ago.

After talking with several people, Lytle decided he could no longer sit on the sidelines.

“I am not a believer in just complaining. I’m willing to put my money where my mouth is, and try to actually step up and do what I think it is best. I feel like we are getting people in there not interested in personal gain. I want to make sure people in there are looking out for the town’s interest. I want to help New Palestine grow, get the money appropriated for the right places. Tired of the frivolous spending and waste of taxpayer dollars. Everything will have to be accounted for, and I have to be able to understand why we need things that are being asked for,” Lytle said.

“I am so excited to work with him. I feel like he and I have the same view in doing what’s best for the town,” Fahrnow told Giant FM.

According to the Hancock County Sheriff's Department, deputies were called to a head-on crash in the 3500 block of West U.S. 52 between a Kia Optima and a Chevrolet sedan.

Katherine Weaver, 30, New Palestine, was declared dead at the scene. She was a passenger in the Chevrolet.

According to police, the Kia was eastbound on U.S. 52 and turned into the path of the Chevrolet, which was traveling westbound.  James Ridenour, 40, New Palestine, was the driver of the Chevrolet and attempted to avoid the crash, but was not successful.

The Kia was driven by Andrew Akers, 26, Greenfield, who was transported to IU Methodist with broken bones and leg trauma.

According to police, Weaver leaves behind four children, who range in age from 5 to 13. Ridenour is the father of two of the children.

A Hancock County business that was the scene of a death investigation in recent weeks and has found itself in the midst of legal issues caught a bit of a reprieve by the Hancock County Circuit Court.

As a result of the injunction, Attorney General Curtis Hill’s office will have two weeks to conduct a thorough inventory, and nothing can be removed from the office.

According to court records, Greenfield Granite’s former owner Amie Strohl was to have appeared in Hancock County Superior Court 2 for a civil case. In addition, she was a defendant in another case brought forward by IMC Credit Services. Court records show that a judgement was granted to IMC Credit Services after Strohl did not show for several appearances.

In addition, the Greenfield Police are conducting an active investigation after more than 70 customers filed reports with the department, alleging they paid for gravestones but never received a finished product.

Greenfield Granite was the site of a death investigation last month as officers located a 50-year-old female deceased at the business. The female was later identified as Strohl and an investigation ruled the death a suicide.