Sarah Robinson grew up a Golden Bear but life circumstances have made her a Triton Central fan.

Diagnosed with breast cancer in 2008, Robinson (photo above), a 1988 Shelbyville High School graduate, attended her first Triton Central “Pink Out” game in 2009. She was front and center Friday night during the 2022 celebration, stepping out of her comfort zone to discuss with the audience her second battle with breast cancer.

“I started coming here because a friend told me about it,” said Robinson of the annual Pink Out game in Fairland. She had a good friend attend for the first time this year. “I was overwhelmed (that first time). This is a community. They really come out in full force.

In year one, the event hosted by Triton Central’s girls basketball program raised $5,000.

“Our goal was $1,000,” said Triton Central athletic director and girls basketball coach Bryan Graham. “That’s when we knew we had something.”

Every year the event raised more money. Graham expected to raise more than $20,000 Friday – all donated to the Indiana Women In Need foundation to be dispersed to Shelby County families battling breast cancer.

“It’s unbelievable,” he said after the event Friday. 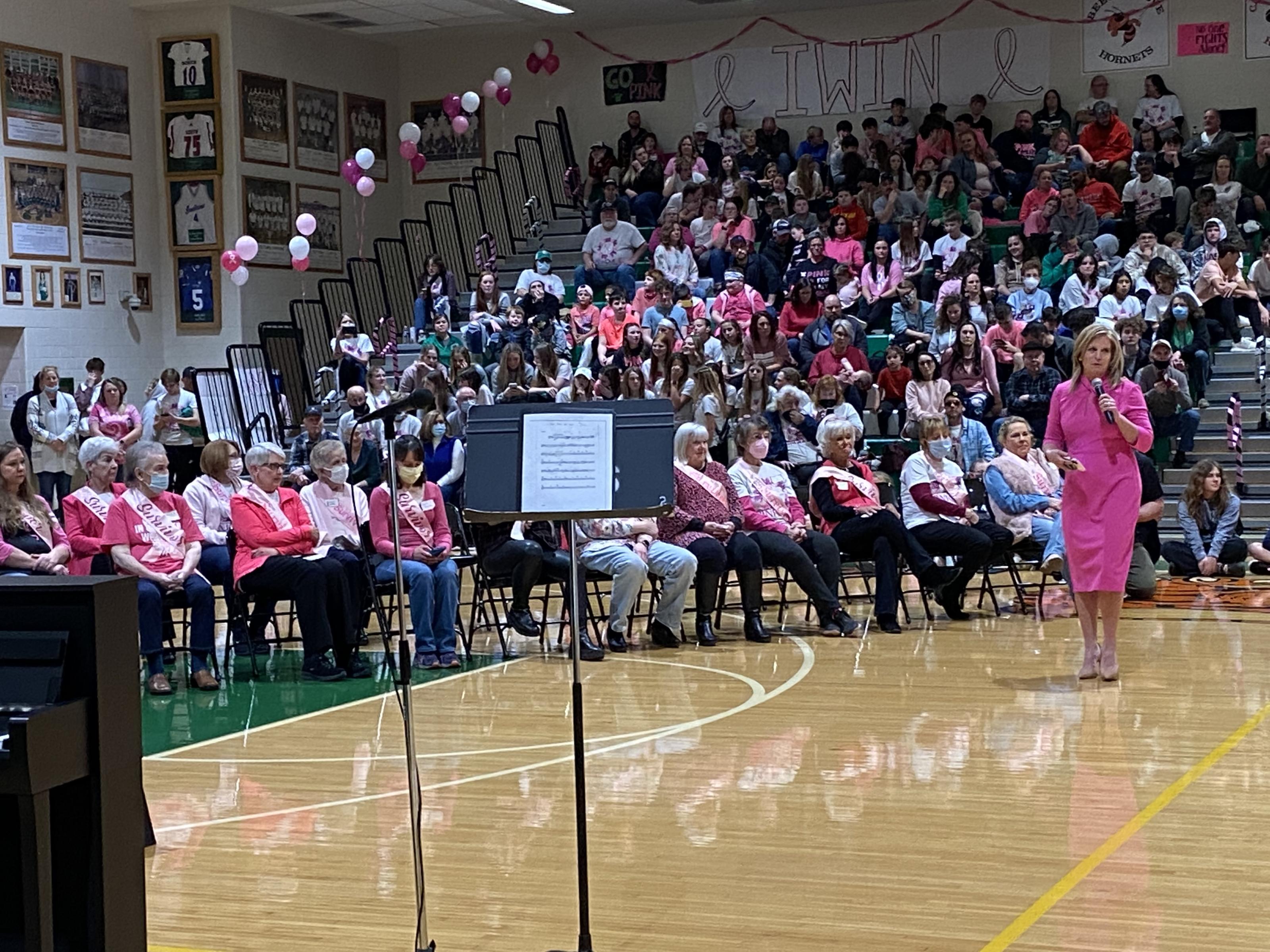 Hailed as the “largest Pink Out game in the state,” the event has become IWIN’s largest single-event fundraiser. Founder Nancy Shephard was on hand Friday to address the crowd along with foundation board member Anne Marie Tiernon (photo above), a television anchor at WTHR-13 in Indianapolis.

Shephard noted TC’s Pink Out game has directly helped 450 men and women as a result of its tie-in with IWIN.

Robinson was in Fairland late Friday afternoon enjoying a catered dinner in the hospitality room set up for all the breast cancer survivors in attendance.

As the junior varsity game concluded, a cavalcade of volunteers set up the gym for the parade of survivors and Pink Out celebration.

With students and basketball players standing courtside, the survivors entered the raucous gymnasium for a parade walk around the court.

This year’s event honoree was Dr. Robert Goulet, who is retiring after 35 years as a breast cancer surgeon. He recognized the survivors as “fighters” and praised the advancements in treatment since he first started practicing medicine more than three decades ago.

Robinson, with help from fellow breast cancer survivor Kelli Robison, shared her story with the crowd. It was a heartfelt message to young and old that cancer is not remorseful.

At the age of 38, Robinson found a lump in her breast. She was diagnosed with Stage 2B infiltrating ductal carcinoma of the breast. And if the diagnosis was not tough enough, she had to tell her 6-year-old son Nick about the hardships that were coming.

Eight rounds of chemotherapy and 33 radiation treatments took its toll and her hair but Nick was there to make her feel better.

“He would literally massage my bald head. I loved it,” she said with a big smile.

Nine years later, the cancer returned. On Feb. 12, 2017, Robinson fainted in her bathroom. It was Nick who found her on the floor.

There was a mass in her chest restricting blood flow to her brain. That fall to the floor of her bathroom saved her life.

One month later, Robinson was told the cancer returned and metastasized to her liver and bones. She was now considered Stage 4.

“Ten years have gone by (since my first diagnosis) and it’s amazing the prognosis,” she said. “When you here Stage 4 metastatic breast cancer you think death. I was thinking death myself.”

She had no idea that the cancer was back.

“I did not have any inclination of anything. I was feeling so good,” she said. “The doctor said there is a mass on your chest, I can’t let you go.”

Robinson is having another round of chemotherapy today. She will be rechecked in seven weeks to see if the treatment is working.

Friday’s Pink Out game is a reason Robinson maintains hope.

So does Sarah Coffey, dubbed the grand marshal of the parade. She is currently battling cancer for the fourth time – her first diagnosis came over three decades ago.

“And I hope there are many more to come,” she said with an air of feistiness about the Pink Out games.

Robinson has not needed IWIN’s services yet. She is a staunch supporter of the foundation that offers a wide variety of support to breast cancer survivors and their families.

“IWIN is fabulous. I always donate to benefit the other women because I feel fortunate that I have a job and I have insurance,” said Robinson, who works for UA Local 440 Plumbers, Pipefitters & HVACR Service Technicians of Indianapolis. “A lot of these women don’t … they don’t have a job. This helps them function in their new normal. You don’t have a normal anymore, it’s a new normal.” 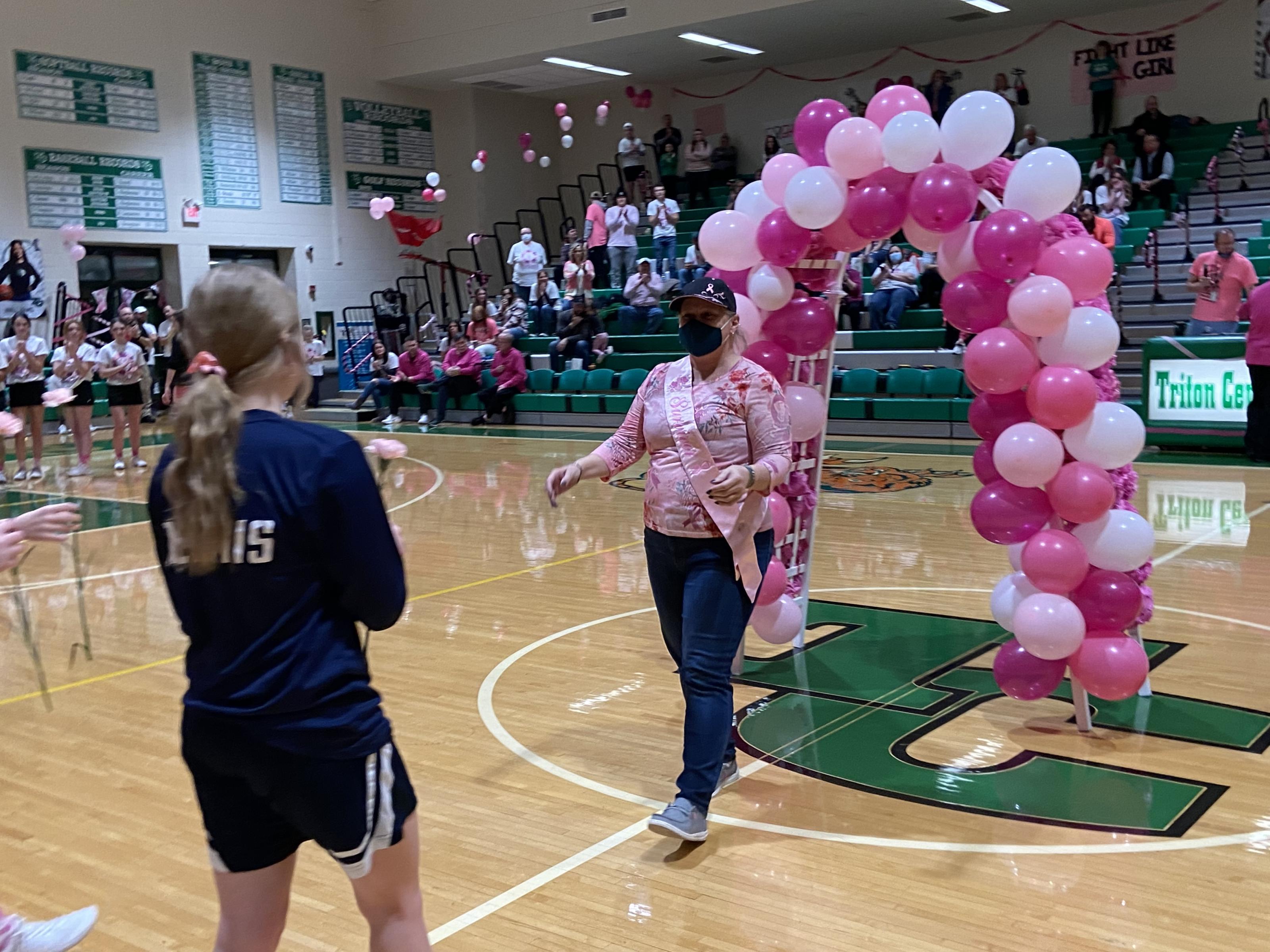 Sarah (Stieneker) Robinson is introduced to the crowd during Triton Central's Pink Out game Friday and accepts a pink flower from an Oldenburg Academy basketball player.

At the end of the Pink Out celebration on the court, each survivor is introduced to the crowd and presented with pink flowers from representatives of Triton Central’s and Oldenburg Academy’s basketball programs as well as Triton Central’s cheerleaders.

The survivors then formed entrance tunnels for both of the varsity basketball teams as they took the court for pre-game warm ups. Then they returned to the hospitality room where they were presented with door prizes.

Robinson (photo above) took a few minutes to visit the silent auction tables to up her bids before returning to the hospitality room. Her generosity was rewarded with several auction items.

“I feel like I can go on now,” said Robinson when asked what the event means to her. “There are a lot of days where I sit and cry and wonder why me?” 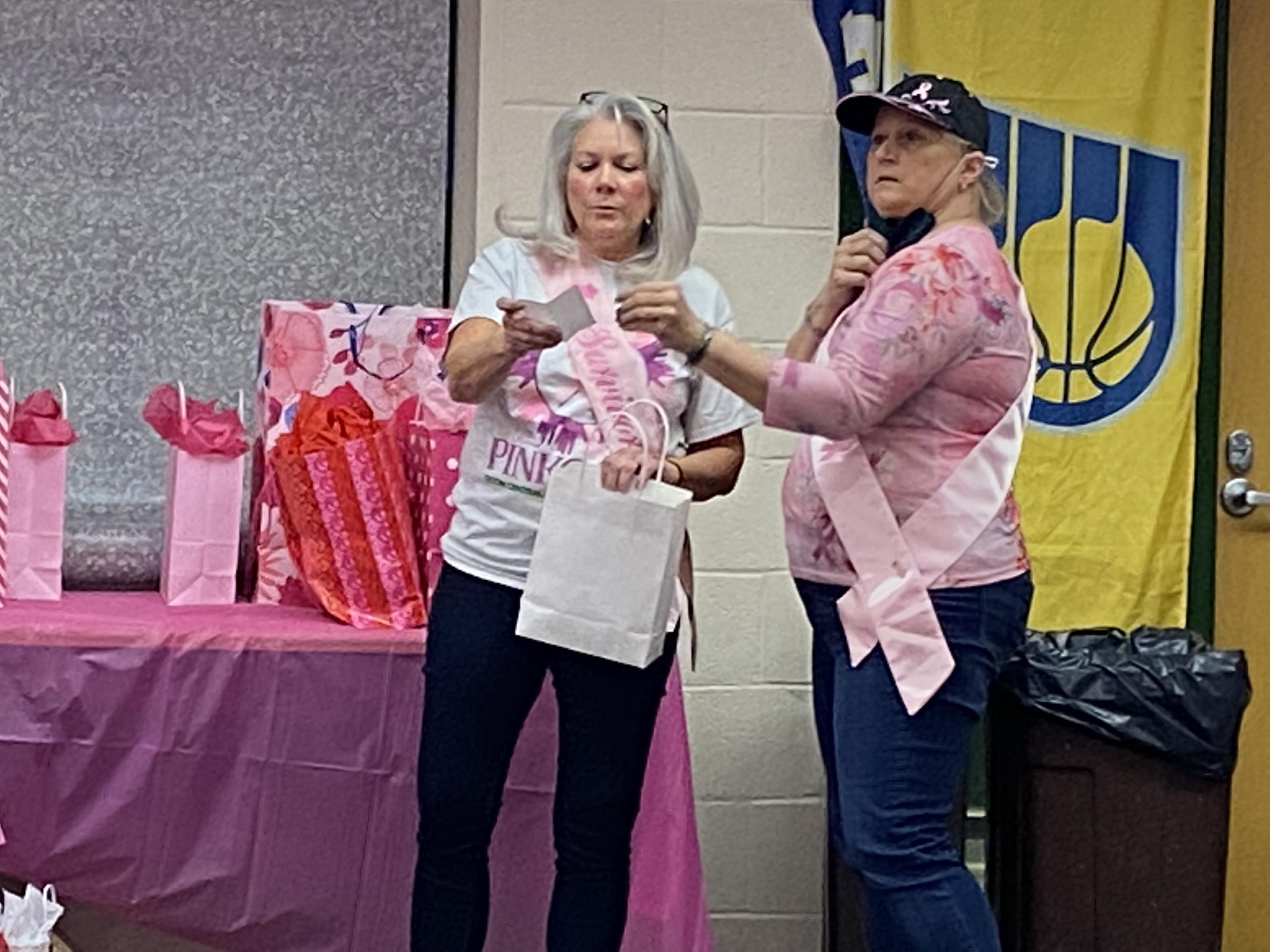 Robinson assists Kelli Robison (left) with doling out door prizes to all the breast cancer survivors in attendance Friday.

Graham will tell you the win has little meaning at the end of the night. It’s the joy brought to those that needed it that make Triton Central’s Pink Out night so special.

“There is a lady that has passed away now. She came the first 12 years,” said Graham. “When she passed away, her daughter called and said we are sending a check and will be there even though mom is not there because in the last 10 years, this was the one night a year that mom said nothing hurt and she didn’t have to worry about anything except coming to the Pink Out game.

“What do you say to that? When you have ladies that look forward to this night all year long, I told the (TC) girls, your goal in life no matter what you do, whether it’s job or family, when you are gone or stop teaching or stop coaching, you want to look back and say, ‘What mark did I leave?’ And I think all my assistant coaches and myself and these girls over these last 14 years … we’ve left a mark. That’s something that people will always talk about.”