The talking points for the 2022 election cycle in Shelby County are well established.

Transparency and communication in county government and responsible growth within Shelby County were part of the discussion Saturday afternoon at a meet the candidate event hosted by the Northwest Shelby County Concerned Citizens Coalition at the Fairland Volunteer Fire Department.

Four candidates took part in the question-and-answer session and met with many interested attendees.

Sanders, a republican, has been an elected official since 2007. She will be unopposed in the May election.

“We need to get back to being civil and talking and respecting people,” said Sanders as she concluded her remarks.

“My mission accomplished moment for this campaign is 20 years from now, my kids, wherever they may be, decide they want to come back to the community and put down roots,” Abel said. “That, to me, is a measure of success. If they have the same opportunities to make the same decisions that my wife and I were fortunate enough to make, that to me is responsible growth.

“If you put the pieces in place to make people want to come back here and live here and put down long-term roots, that is responsible growth.” 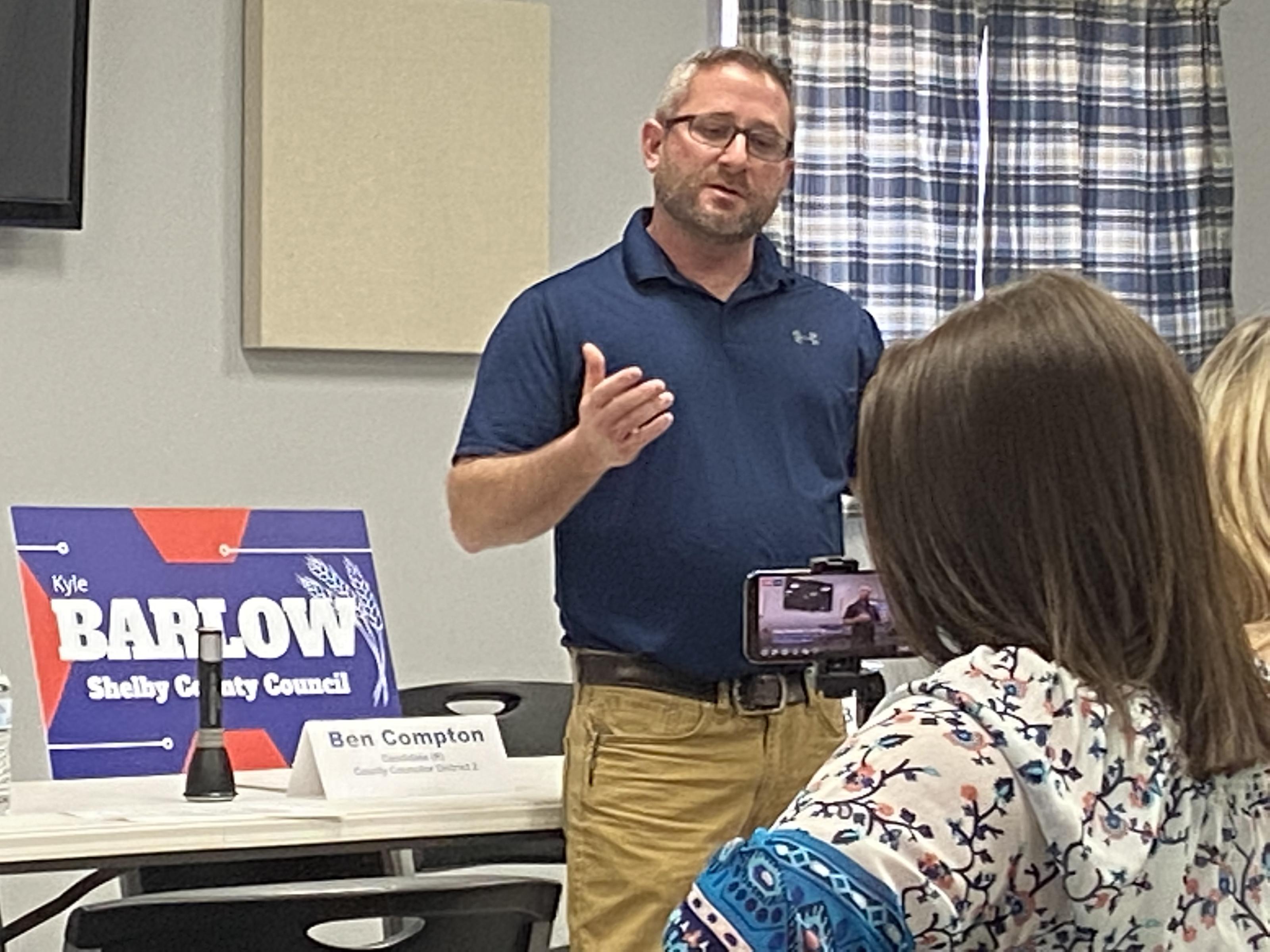 Barlow (photo, above), a farmer from western Shelby County and front line proponent against solar farms taking over prime farm land in the southwestern part of the county, wants proposed projects to be better investigated before given a stamp of approval and a tax abatement.

“We seem to be very focused on industry right now in this county,” said Barlow. “Responsible growth, if you are going to have the jobs you have to have a place for people to live. And you need to have the farms to still feed them.

“Irresponsible growth, in my opinion, is voting things through before we ever look at the company … we vote it through because a handful of people think it is the best. We are at a crossroads right now as to how we want to develop this county. If we just go with industry and how we are doing it, I am afraid we are going to lose out on getting people in here.” 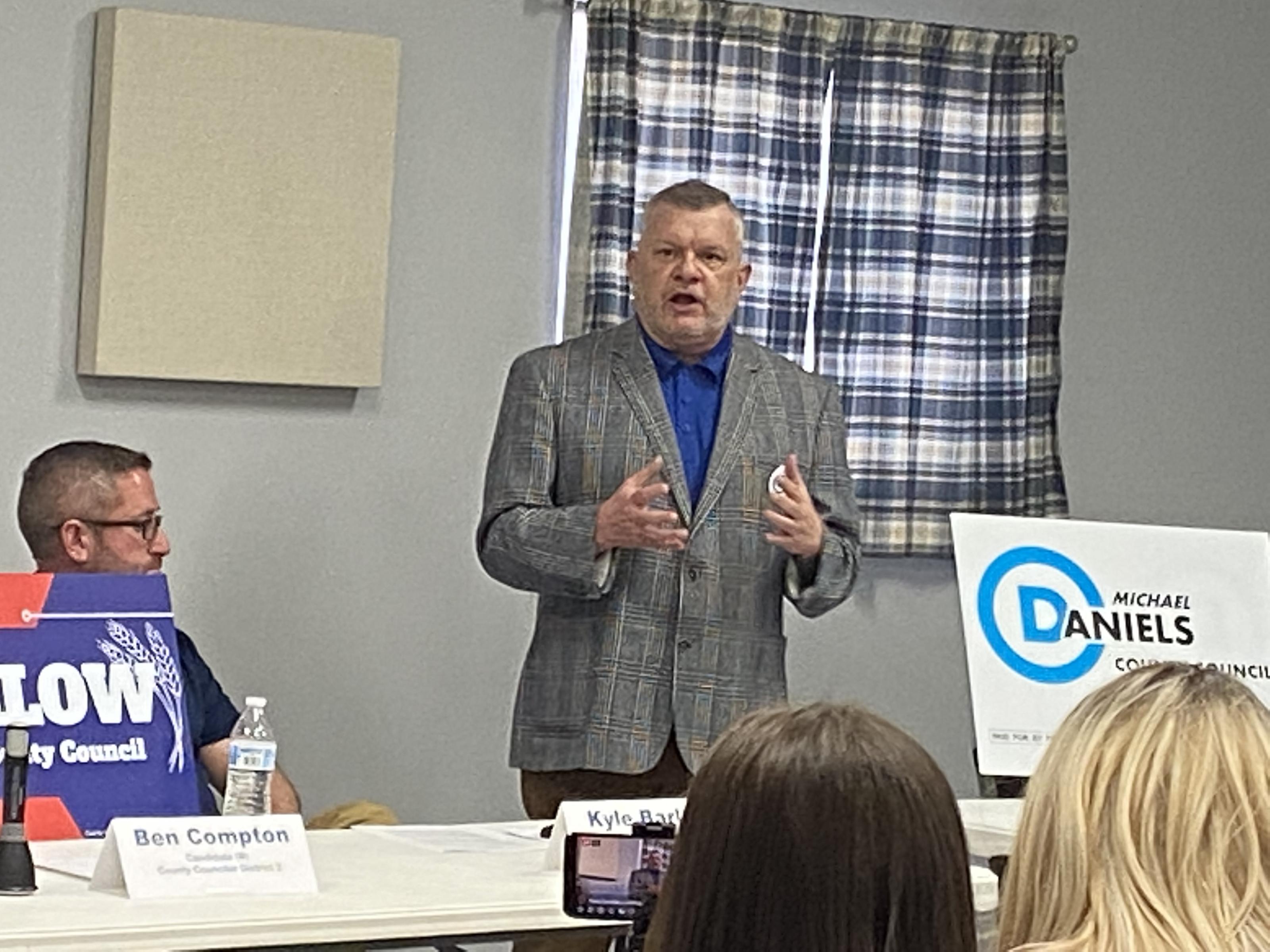 Daniels (photo, above) works for the City of Shelbyville as the Behavioral Health & Justice Equity Director. A Shelbyville High School graduate, he moved back to his hometown in 2021 to take a position within city government.

Sanders was the only incumbent up for reelection to partake in Saturday’s discussion.

All of the candidates agree that transparency needs to be improved in county government. Meeting agendas and past meeting minutes should be readily available online and various meetings should have a live streaming element for viewing.

In addition, decisions that are made by elected officials where an apparent conflict of issue seems evident should be addressed.

“I’m a firm believer that you need to pay attention to the guidelines and if there is a perceived conflict of interest, it is always best to recuse yourself,” said Sanders. “Even though by law you don’t have to if you are not directly benefitting from it, it still just doesn’t look right. There are times you need to step back.

“I think we have issues where we are not transparent … I think we need to do a better job on educating. There are a lot of times where you can’t talk in public about certain things, however we still need to let people know what is going on.”

“I work for the city and I report directly to the mayor,” said Daniels. “The city does some things really well. We live stream all the meetings whether it’s the city council, board of works, the parks department … you can go crazy watching city meetings streamed online. We could do a better job of publishing those agendas before those meetings.

Barlow is running for the county council seat currently held by Ben Compton, a fellow republican.

“There is a lack of transparency,” stated Barlow. “Information is not easily found. I do think being public business, it should be out there.”

“I believe meetings should be live streamed,” continued Barlow, who along with his organized group to campaign against solar farms in Shelby County, pushed for county meetings to air live through Zoom.

Abel again stated his view that future voters, future residents of Shelby County will be his prime concern when making decisions.

“As far as who does a holder of a political office answer to? There are two constituents: One, the voter, and two, the future generations,” said Abel. “We are the stewards of this community. That’s who a politician needs to answer to.”