Don Chambers still remembers the food he ate on state championship day, the white linen sheets at the hotel they rested at between games and the downtown Shelbyville bonfire that was part of the celebration.

Time has passed on Shelbyville High School’s only state championship basketball team – 75 years to be exact – but his memory is still fresh of the Golden Bears’ magical run in 1947.

On the 75th anniversary of the title, Chambers (photo) was one of several guest speakers Tuesday night at the Strand Theatre in downtown Shelbyville to commemorate the championship.

One of two surviving members of that Golden Bears squad, Chambers entertained the crowd in attendance for the Community Treasure Series event presented by the Grover Museum. A retired engineer from Chrysler in New Castle, Chambers still works there at the Indiana Basketball Hall of Fame.

Chambers twice walked away from the microphone on the Strand’s historic stage after pronouncing he was finished only to return with more memories.

A junior on the squad, Chambers was the sixth man, or first one off the bench, and played a vital role in Shelbyville’s semifinal and championship game victories.

Chambers also is recognized as the final player to score in Shelbyville’s 68-58 win over previously-unbeaten Terre Haute Garfield in the championship game, which set a record for most points by a winning and losing team, at Butler Fieldhouse, now known as Hinkle Fieldhouse, on the campus of Butler University.

The Golden Bears wore their traditional white uniforms but they were trimmed in red recalled Chambers. Two sets of uniforms, one white and one red, arrived for the season when supply chain issues were complicated. Shelbyville wore the red uniforms until a particularly disheartening loss to Rushville caused head coach Frank Barnes to shelve them. The Golden Bears continued to wear the white uniforms and went back to their traditional black uniforms for road games.

There is a color painting of the team hanging at the high school commemorating the state championship team. Chambers mentioned that the trim on the uniforms was painted gold instead of red to reflect the school colors.

Chambers also was sporting his state championship ring – the first given out in a change of policy by the Indiana High School Athletic Association. The team did not receive individual trophies, although a local community fund was later created to provide trophies to the champions – as well as watches and belt buckles, according to Chambers.

Barnes’ team started three African-American players which bothered some communities Shelbyville played. That led to the Golden Bears being dubbed the “Black Bears.” Certainly not an endearing term for a team that was later lauded for the way it handled racial tension in the late 1940s. 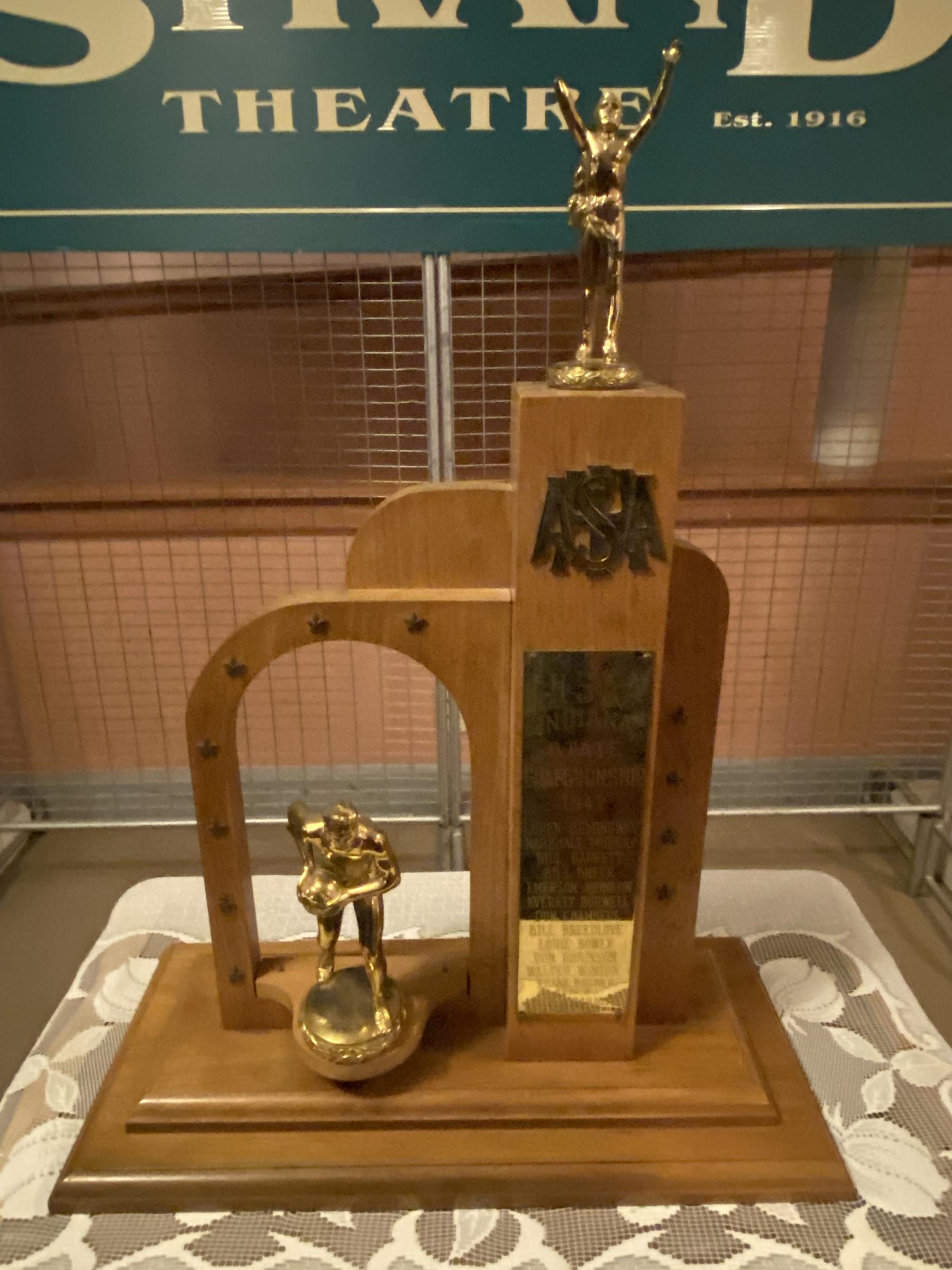 William Garrett, who went on to play at Indiana University, is the most well-known member of the Golden Bears. The high school gymnasium at Shelbyville now bears his name. As part of the presentation Tuesday, video clips were shown from March 22, 1947, that included Garrett milling around with the state championship trophy, which was on display Tuesday at the Strand Theatre (photo).

Hemingway, who was not in attendance Tuesday, is the only other surviving member of the team.

Frank Barnes was the head coach and Arthur “Doc” Barnett was the assistant coach.

Also in attendance Tuesday was Garrett’s nephew, James Garrett Jr., a 1977 graduate of Shelbyville High School. He thanked everyone in the community for keeping the memory of the state championship team alive.

“We thank you all for coming out this evening. We thank the community of Shelbyville,” said Garrett Jr. “I was speaking with my cousin just this past weekend. I told Lori it is phenomenal the way the Shelbyville and Shelby County community remembers 1947 and that state championship team. I and my family cannot thank you enough for the memories, for embracing that state championship team and keeping that forever vigilant in this community.”

Garrett Jr. was born on Feb. 26, 1959, just days before his well-known uncle led Crispus Attucks to the boys basketball state championship as a head coach. 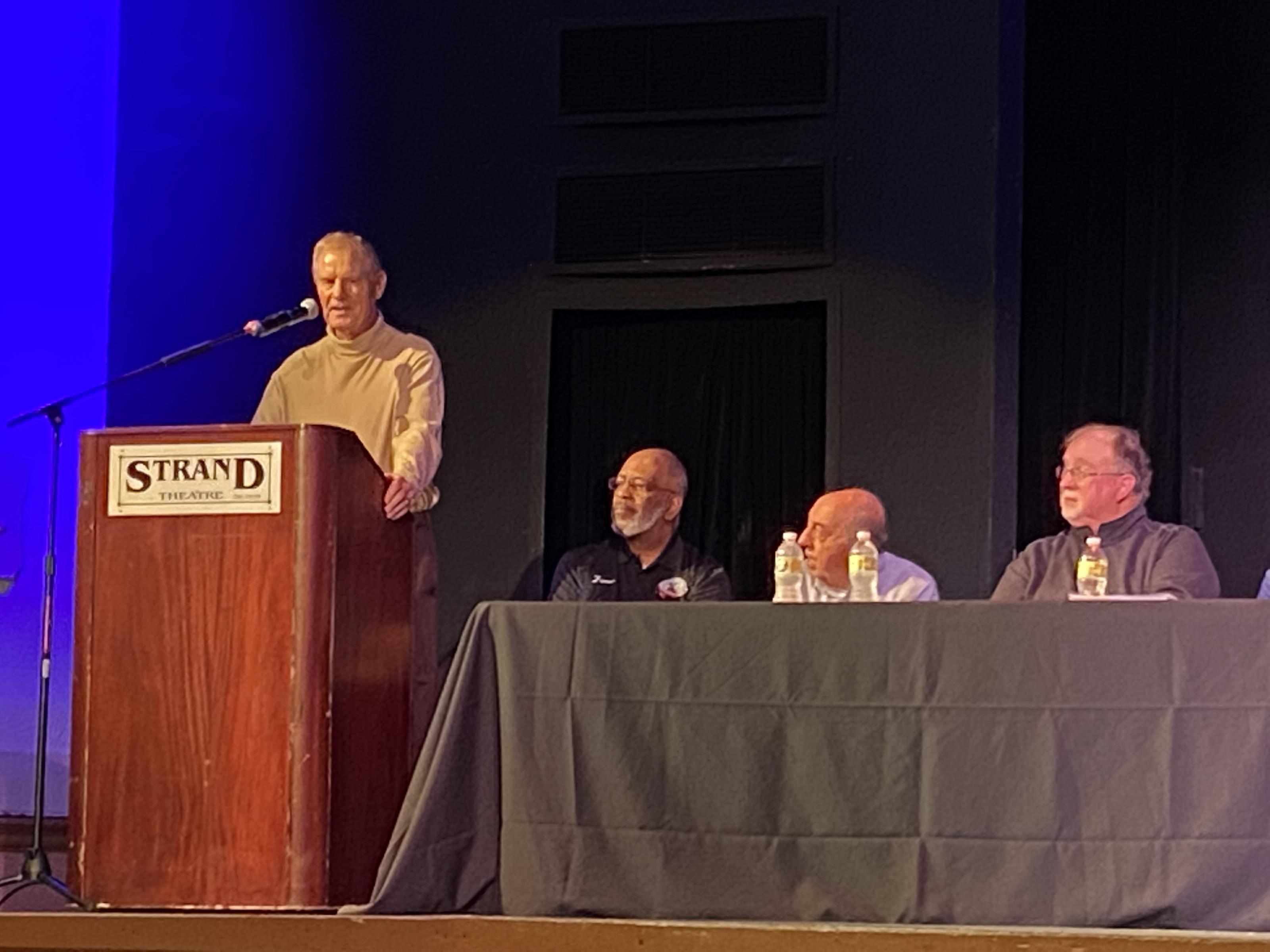 Gary Long (photo, at microphone) was seven years old when Shelbyville won its state championship. He spoke Tuesday of the reverence of that team and how it shaped his future as a two-time Paul Cross Award winner and 1961 team captain of the Indiana University basketball team under the leadership of Branch McCracken.

“I was 7 years old when Shelbyville won the state. I was downtown for the parade that was going through downtown and those Shelbyville basketball players were up on top of fire trucks … you talk about an inspiration for a 6- and 7-year-old to want to become a Shelbyville Golden Bear,” said Long. “To me, that’s the reason I’ve had such a great life for 82 years. It has a lot to do with that basketball team.”