Many Shelby County residents embarking on shopping trips these days will undoubtedly succumb to habit and pull into the Mickey’s T-Mart parking lot.

Their intentions might include a lengthy weekly visit to stock up for many days, a quick stop to pick up a few items or perhaps breakfast doughnuts or lunch from the deli.

These would-be patrons will then suddenly realize that Mickey’s, located at 748 S. Harrison St., the family-owned and operated supermarket that served the community for just shy of 44 years, is now closed.

“Everything has its time and we had a great run in Shelbyville,” said Mickey’s T-Mart vice president Brian Meeke. “Economics and the ever-changing times made the decision to close inevitable. Supply issues were a concern before the pandemic and were going to be ongoing. We were also unfortunately losing a good portion of our traditional, loyal customer base as people got older.”

Meeke indicated that there were myriad factors that resulted in Mickey’s ultimately ceasing operation on Nov. 6, 2021.

The Mickey’s family will maintain a business presence and entertain potential tenants for the store space. The corporation owns the former store building that currently leases space to NAPA, Edward Jones and Don’s Pizza. The company also owns apartments and other rental properties in the neighborhood and around town.

“There will still be a good deal of work managing properties, however we will not have the daily grind of running a full-scale store,” stated Meeke.

In an ironic twist, the Meekes also own the late-1960s Kroger building located adjacent to Mickey’s which is the present-day home of Family Dollar.

Chain groceries began in the 1920s, primarily in bigger cities, however it was not initially profitable for these companies to widely expand their reach to outlying areas. Even when they did, as with Kroger and the A&P in Shelbyville, the operations, if somewhat larger, were similar to the local independent establishments. There was still a place for the “mom and pop” grocery.

Modern advancements in technology, communication and transportation made for a steady stream of chain encroachment on smaller cities and towns that gained significant momentum in the 1960s. This would eventually result in the mega-store boom of the past quarter century.

The small-town family grocery enjoyed considerable success and widely prospered from the mid-40s through the mid-70s. It seemed every Shelbyville neighborhood had a family-owned-and-operated grocery store.

Wiley’s on Noble Street served the Sunrise Park community; the Zerr family offered stores at Five Points and E. Mechanic Street; Dean’s Market was at the corner of Colescott and Montgomery and the Thomas family managed three stores in town -- The Guinea Pig, The Superette and Thomas 421. There were many other similar examples in Shelbyville.

These were grocery stores with identities closely associated with the families. Store customers would regularly come in contact with the owners and their children, even their extended families.

“Shelbyville Today,” a 1976 documentary reported that Shelbyville had 49 grocery stores in 1950 -- many were family owned. That number had dwindled to 11 by 1976. Today there are three. 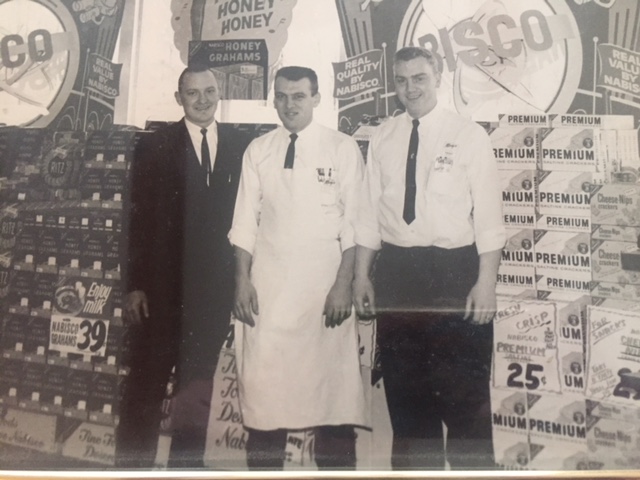 Harry Meeke, Brian’s father and president of Mickey’s, is a native of Joliet, Illinois. He began work in the grocery industry in Kankakee for Rudy Jaggersma in 1953.

”Rudy owned several stores and taught my dad the grocery business,” said Brian. “Harry moved to Springfield to be a district supervisor for Rudy’s Market in 1967. He accepted a supervisor position with Scot-Lad in Indianapolis in 1971. When Scot-Lad gave notice that they were selling their stores in the late 1970s, dad had to find other employment.”

The elder Meeke (main photo), intent on becoming an entrepreneur, took the measure of several Scot-Lad franchises in the central Indiana area. He knew these businesses would soon be on the market and was looking for the best opportunity.

“Dad would sit in store parking lots and evaluate the customer traffic,” said Brian. “He determined that the Shelbyville Thrif-T-Mart presented the best opportunity. He did his homework.”

Harry and his wife, Brenda, purchased the business and established Mickey’s T-Mart (German pronunciation of Meeke) in early 1978. The family was living in Whiteland at the time. The store opened on January 28, in the midst of the blizzard of 1978.

“Mom and dad could not make it in to the store on opening day,” said Brian. “It was a hectic first day.” 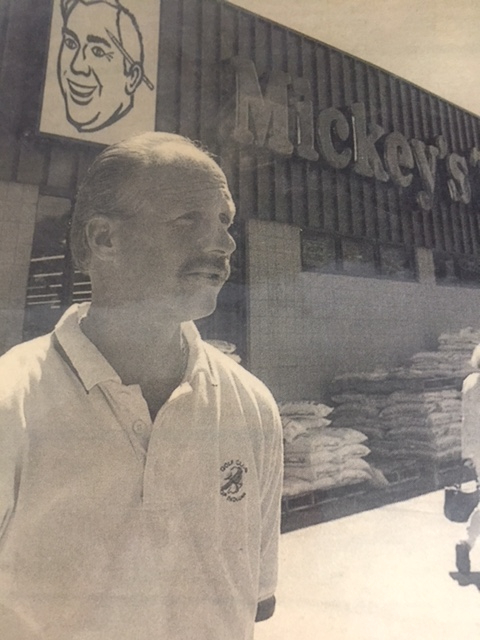 Brian (photo) was in the middle of his first year at Franklin College. He had a good deal of experience from working in Scot-Lad area stores. His sister, Pam, was a junior at Whiteland High School. The family moved to Shelbyville following Pam’s 1979 high school graduation.

“Moving to Shelbyville was an easy transition,” said Brian. “I had met a number of friends at college who were from Shelbyville and we all quickly met a great many people through the store who would become long-time friends.”

Brian would earn a bachelor’s degree in accounting in 1981; Pam completed an associate’s degree from Ball State in 1982. Both would work a multitude of hours between their school obligations. After graduation, they began their full-time careers at Mickey’s T-Mart.

Mickey’s presented an attractive combination to the shopping public: the size and stock of a supermarket along with the familiarity and relationships of a hometown entity. Harry was ever-present and Brenda worked as head cashier for many years. Pam would eventually handle the morning duties while Brian moved into the role of general manager. All four of Harry and Brenda’s grandchildren would at some point as teens and young adults work at Mickey’s.

The company built on early success. The family purchased the store building and some nearby properties. In the ensuing years they built apartments behind the business that would provide the foundation of their rental business, Parkside Apartments.

“I played three or four nights a week during my twenties and thirties,” he said.

Brian and his wife, Jill, recently sold their Shelbyville home and moved to Lake Santee. Pam, who lost her husband Rob to lung cancer many years ago, continues to reside in Shelbyville. Their children have all moved away from town.

Harry and Brenda live in the Smithland Road home they bought in 1980.

Mickey’s T-Mart flourished in the Shelby County community for more than four decades. It serves as a local American success story and reinforces the value of family investment and commitment.

“We will always be grateful for the community accepting us and allowing us to work with them for all these years,” stated Brian.

Now 62, he is somewhat sentimental about the past but sanguine concerning the future.

I am sure many of us traveling south on Harrison Street will, at some time, absent-mindedly turn into the Mickey’s lot. We will then, with a twinge of nostalgia, remember that Mickey’s T-Mart is a part of Shelbyville history.