A man was arrested in St. Paul after a brief standoff with SWAT Tuesday afternoon.

Witness reports indicate that a man, name unavailable as of this report, was shooting at something or someone in St. Paul.  From there, he barricaded himself into his home leading to a call to law enforcement and the involvement of a SWAT team at the site.

During the standoff, a bus from nearby Waldron schools was recalled because it wasn't allowed to drop off kids in the proximity of the incident. 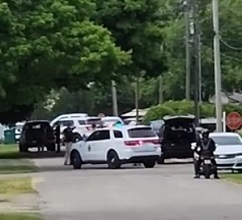 Photos in this story courtesy of Joe Wright

The man was taken into custody after tear gas was deployed.