Posted About Nine Months Ago by Jeff Brown

Ryan Mikus casually strolled the hallway outside the office Tuesday afternoon dishing out high fives to random students. The Shelbyville Middle School principal for more than a decade was closing in on his final hour leading a building full of more than 600 students.

“The No. 1 thing is the kids,” said Mikus of what he would miss most about being the SMS principal. “It’s the life of the building.”

Mikus (photo, left) still has a little over one month left on his current contract. On July 1, he will settle into his new role as Director of School Accountability for Shelbyville Central Schools.

“It will be a lot of overseeing state and federal baseline benchmarks we have to hit, different things with testing,” he explained. “And then working with building-level teachers and administrators and looking at the data review throughout the course of the year for our benchmarks.”

Mikus will be responsible for all five schools – three elementary schools as well as the middle school and high school – in Shelby County’s largest school corporation.

When the new school year kicks off in August, for the first time since 2011 Shelbyville Middle School will have a new principal.

Current assistant principal Wes Hall (photo, right), who has worked at the middle school for seven years and has 13 years with the school corporation, will become the new principal on July 1.

“If you had an ideal way to move into the principal’s role for the first time, this is it,” said Hall Tuesday afternoon. “I have an awesome staff. I think every principal says that, but I’ve gotten to know these guys for seven years. I’m not the new guy, there is a lot of trust – I trust them and they trust me.”

“I am looking forward to getting to interact with the staff and students differently; being able to focus on helping kids and teachers grow,” he said. “I’ve been student-centered the last couple of years. I’m playing a different role now. I’ve gotten to see Ryan do it from afar for the last seven years. Now everything falls on me. I am excited to help this building continue to grow because (Ryan) has done a great job.”

Emily Fuller, a teacher at Loper Elementary School in the school district, has been hired as the new dean of students/athletic director.

The final hour of the school day Tuesday was spent celebrating the students at a convocation in the gymnasium.

Student Council president Sydney Brown was asked to give a speech to the student body – a tradition that was suspended in recent years due to pandemic protocols.

Academic team members were celebrated and students and teachers participated in contests such as musical chairs. 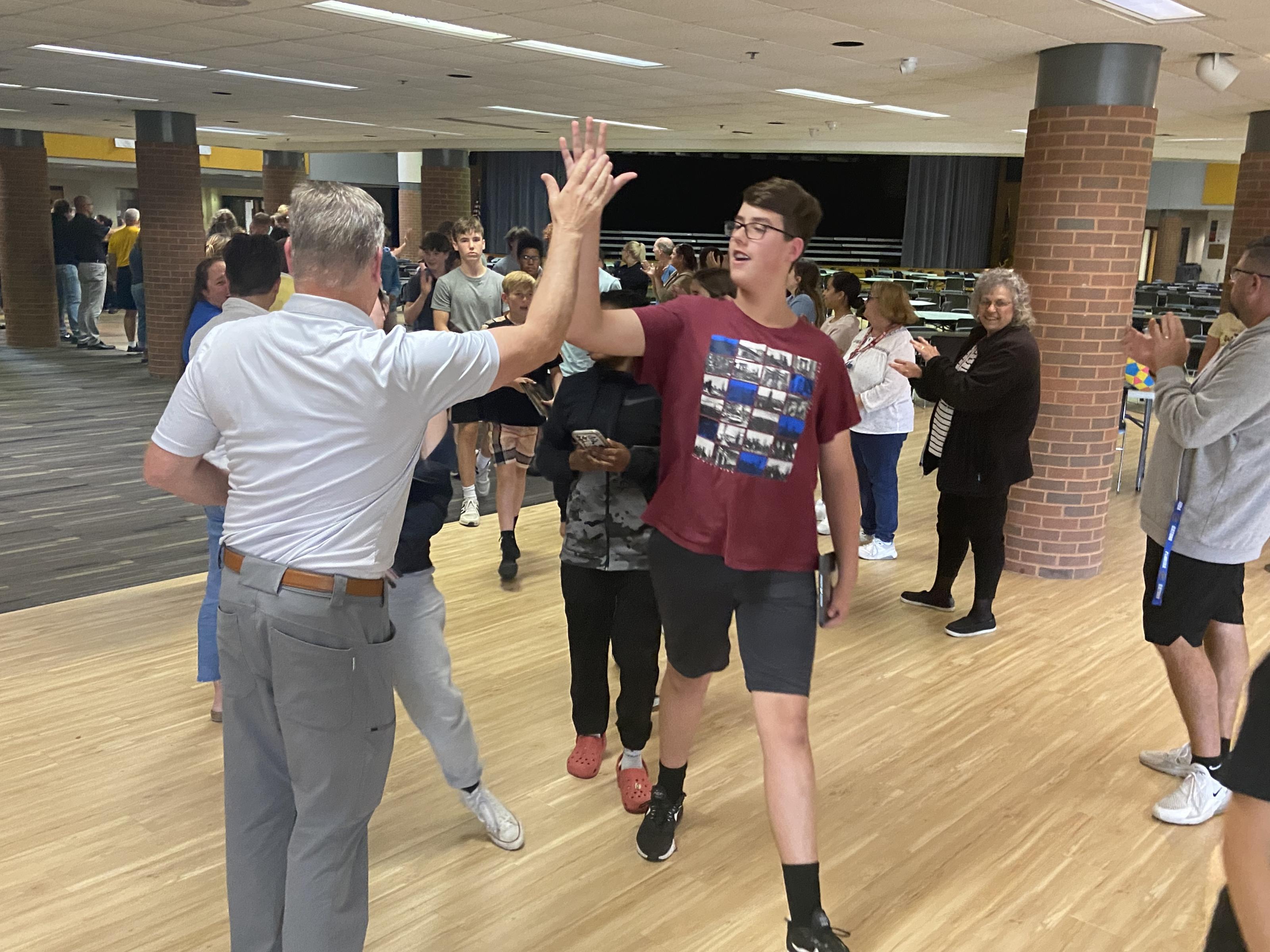 Before the students were dismissed for the final time, the staff gathered outside the gymnasium and formed a tunnel that led the boys and girls to the front door.

“I’ve had time to reflect on it, and you get those emotional times where I will miss the kids, and miss the teachers and the interaction,” said Mikus.

In 70 days, many of the students will return with all eyes now on Hall.

“It will be like my first first day again,” said Hall. “It will be exciting but also nerve wracking because now for the first time it will be 100% on me, but it’s something I’ve been working on for a long time and I am super excited.”