The search continues for a man who stole a Union County Sheriff’s Department truck and has been described as armed and dangerous.

The truck taken by Steven Lakes, 45, was found in Shelbyville in the Kroger parking lot.  Authorities say that Lakes could be in possession of a department – issued handgun that was in the truck. 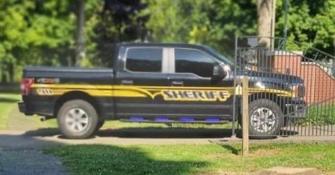 Indiana State Police described Lakes as 5’6″ tall and 145 lbs.  They said he longer has the facial hair seen in his photo. He was wearing a black hoodie and black pants.

Lakes has a criminal history and currently is wanted on warrants for battery of a public safety official and meth charges.

The public is asked to remain vigilant and to report anything suspicious or any possible information on Steven Lakes.