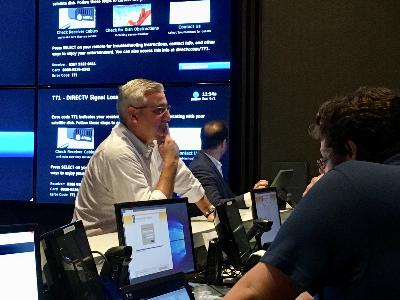 Ron Baumann, senior vice president and general manager of Indiana Grand, led a short program leading up to the ribbon cutting ceremony. He noted the excitement from the entire team at the Caesars Entertainment owned Indiana Grand and thanked everyone for their hard work and dedication in getting the new state of the art facility prepared to open.

“In early spring, legislation passed and now on September 1, we are opening the very first Sports Book for the state of Indiana,” said Baumann. “A special thanks to executive director Sara Tait and the Indiana Gaming Commission (IGC) for getting us here today.”

Local dignitaries were in attendance led by Shelbyville Mayor Tom DeBaun, who spoke of the impact Indiana Grand has had on local tourism and development.

Several state and local officials were present for the event, including Senator Jean Leising, Senator Jon Ford and State Representative Sean Eberhart. Eberhart pointed out the development of sports wagering will assist in facing competition with neighboring states and will be a boost for the entire state of Indiana.

“Sports wagering coupled with live table games coming online New Year’s Day will really set this facility apart,” noted Eberhart, who is a native of Shelby County. “In discussions with Caesars Entertainment this facility will be the second largest property in their portfolio behind only Caesars Palace in Vegas, and that is pretty exciting. It’s very cool to have that right here in our backyard. A special thanks goes out to Senator Jon Ford who is here today. He was very instrumental in working on this bill to get sports wagering in the state of Indiana.”

A large crowd waited in line to be the first to enter Winner’s Circle Race Sports Pub. The first 250 guests received a cap as they made their way to the teller lines to place their first sports wagers.