The impact of COVID-19 has had quite the impact in Fairland, as officials with the Fairland Volunteer Fire Department announced this week the cancellation of the annual Fairland Fish Fry.

In a letter to Fairland residents, fire chief Steven Glackman wrote that all activities for this year's event, which falls on Father's Day weekend, have been shelved.

"This is a difficult decision for our department to make, but was made with the community's safety in mind," the letter states. 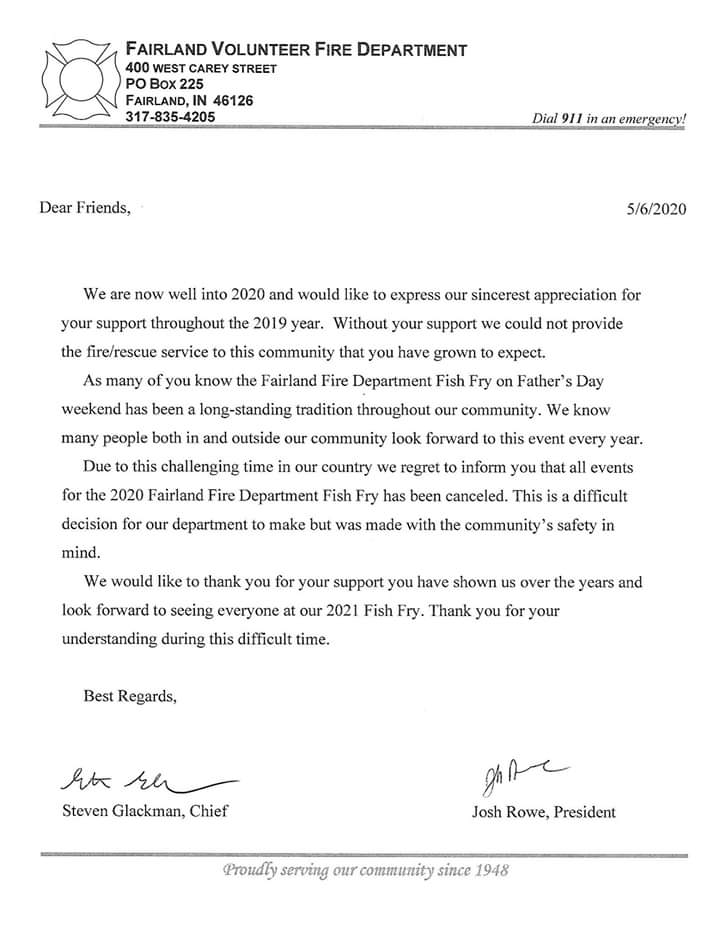 Josh Rowe, of the Fairland Volunteer Fire Department, told Giant FM the planning for the event begins every January.

"We had the bands and entertainment locked down. And then we start to work on lining out the food order. And, then, everyone was put on essential travel only, so we halted the planning phase," Rowe told Giant FM Thursday.

Over the last six weeks, many discussions were held and officials decided May would be the best time to make a decision.

"We had our monthly business meeting last night, while practicing social distancing, and talked about the options with the rest of the members. After a lot of discussions and a lot of what ifs, we decided what we felt was best for the saftey of the community and ourselves would be to cancel it," Rowe said.

Rowe told Giant FM one firefighter said it was the first time in his 35 years he can remember the event having to cancel.

The fish fry serves as a huge fundraiser for the department, and Rowe admits the department is unsure where those funds may come from, but residents are encouraged to donate. Anyone wishing to make a donation can mail it to the Fairland Volunteer Fire Department, PO Box 225, Fairland, IN 46126.

Rowe tells Giant FM, there has been talk of, possibly, having the event later this year.

"There was talk about maybe doing a Saturday fish fry later in the fall but we are not sure yet with all the schedule changes taking place if it would work out," Rowe said.