The single vehicle accident happened at 1200 South and 825 West in the 9:00 pm hour.  Flat Rock along with Marietta Fire and Shelbyville Medics responded.

The vehicle left the roadway for an undetermined reason and became inverted.

The driver, Matthew Nelson, 28, of Edinburgh, was flown to Methodist Hospital. The passenger, Briana Vera, 29, of Columbus, was transported to the hospital via ambulance.

The accident remains under investigation. 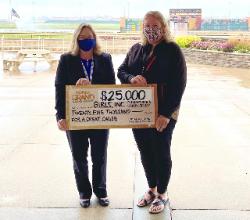