On paper, Friday's Class 5A semi state clash between top ranked and undefeated New Palestine and Bloomington South could have been a "trap game" for the Dragons.

After all, New Palestine clawed its way past Cathedral last week in the regional final in a game many viewed as the top game of the season. 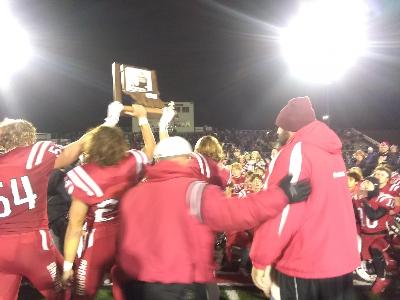 However, it took less than a minute for the Dragons to put an end to any thoughts of a lack of focus or potential upset, as senior running back Charlie Spegal found a seam and rumbled in for a 57-yard touchdown. The score set the tone for what kind of night it would be, giving New Palestine a lead it would never relinquish en route to a 45-0 win and another trip to Lucas Oil Stadium for a state title opportunity. The Dragons will play third ranked Valparaiso at 7 p.m. Friday.

Spegal, who finished with over 250 yards, was only getting started, as would again score from 57 yards out to extend the lead to 14-0 with just under seven minutes to play in the first quarter. The lead would swell to 24-0 after another Spegal touchdown and a field goal by Alex Kropp.

The Dragons would get a pick six by Brody Luker, as well as scores by quarterback Lincoln Roth and Spegal to round out the scoring.

The win was the 27th in a row for the Dragons, and Ralph said it was a tremendous way to send off the seniors who played their final game at home.

For Ralph, the win was the result of a strong running attack by Spegal, combined with a defense that held the visiting Panthers to negative yardage for much of the first quarter.