Bryan Graham has replaced many different kinds of athletes during his highly-successful 13-year run as girls basketball coach at Triton Central High School.

Finding the best way to replace a true point guard like Taylor Heath will prove challenging this offseason.

While the colors of Heath’s jersey will change, Graham expects her to continue being a dominant point guard at Hanover College.

“I expect her to go into Hanover and take control and play the point guard position for the next four years,” said Graham. “Hanover got a steal and they know it.” 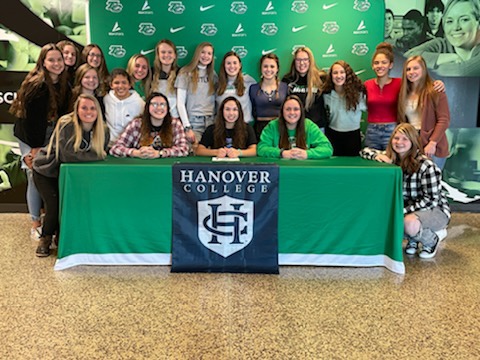 Triton Central senior Taylor Heath (seated, center) recently signed her letter of intent to play basketball at Hanover College. She was joined by her Triton Central teammates for the signing ceremony.

Heath made her commitment to the southern Indiana college official last week with a signing ceremony at Triton Central.

“It’s a family atmosphere,” said Heath as to why she chose Hanover. “The coach made me feel like a part of the team. Then I met the girls and that solidified it.”

Heath intends to major in Kinesiology and Integrated Physiology to pursue a career as a physical therapist.

The Panthers are currently 6-3 with six games canceled and one postponed this season. The roster features just one senior and four juniors which means Heath will face stiff competition when she arrives on campus.

Now that she has officially signed with Hanover, her personalized basketball workout will arrive soon. Heath intends to play softball this spring for TC which means she will have to balance commitments to two sports.

“I am excited for softball,” said Heath, “but I will have to find time for basketball too.”

Chandler and Stephens graduated and Phelps suffered a knee injury which forced Heath to get comfortable looking to score.

“I knew I was going to have to score more,” said Heath. “With Tenleigh out I started feeling quite a lot of pressure in the beginning but my teammates stepped up.”

Heath nearly doubled her scoring average to 14.7 ppg. And her assist average went up to 9.5 per game.

“She could always do it,” said Graham of her scoring prowess. “She just didn’t have to do it (until this season).”

While not the ideal way to progress as a player, graduation and an injury forced Heath to improve her game.

“I’ve never really been a score-first kind of player,” she said. “That made me look to create a little more which made me overall a better player.”

Heath leaves TC with program records for assists in a game (17) and a single season (227). She came up 32 assists short of Samantha Dewey’s career record for assists (629).

“You can’t replace that. Next year will be more point guard by committee. You are not going to replace Taylor. She is a true point guard and there are not a lot out there to begin with. If you have one, you are very lucky,” he said.

In a matter of months Heath will graduate and then focus on being a freshman in college. That does not mean she will lose touch with Lady Tigers Basketball (LTB).

“LTB is family,” she said. “It’s such a great atmosphere to be around whether you are junior varsity, varsity or a manager. The coaches are great. There is the tradition. Just because I’m a senior I still feel like I will be a part of it, still talking to the underclassmen.”