Dr. James Carmichael, inducted posthumously, and Ernie Gaskin were the 18th and 19th individuals added to the prestigious list of leaders who have worked tirelessly to promote and support horse racing in the state of Indiana. Rachel McLaughlin served as emcee for the ceremony.

Dr. James Carmichael, a longtime resident of Sullivan County, was a career advocate for Quarter Horse racing. The graduate of Purdue University School of Veterinary Medicine owned a veterinary practice in Sullivan, Ind., prior to his death in 2009. He was one of the initial members appointed to the Quarter Horse Breed Development Committee.

Carmichael was instrumental in developing the program for owners and breeders that has flourished over the past 25 years. He was later appointed to the Thoroughbred Breed Development Committee and was elected chairman.

Randy Beard, a longtime friend of Carmichael, provided a look at Carmichael’s career in racing and talked about how he joined his father, Eugene, at an early age to run Carmichael Stock Farm. The official resolution was read by Brian Elmore, also a native of Sullivan County and family friend, prior to the unveiling of the portrait of Carmichael.

Jan Carmichael, Jim’s wife, accepted the award on behalf of Jim, and was joined by family members during the induction. Jan noted Jim’s love of horses and his dedication to racing during his life.

“I want to thank the IHRA for this wonderful honor,” said Jan. “Jim would have been so proud to see how racing has evolved in Indiana, and he would be so happy to be recognized for his involvement. He loved racing and horses so much. My family and I thank you for honoring him with this award.” 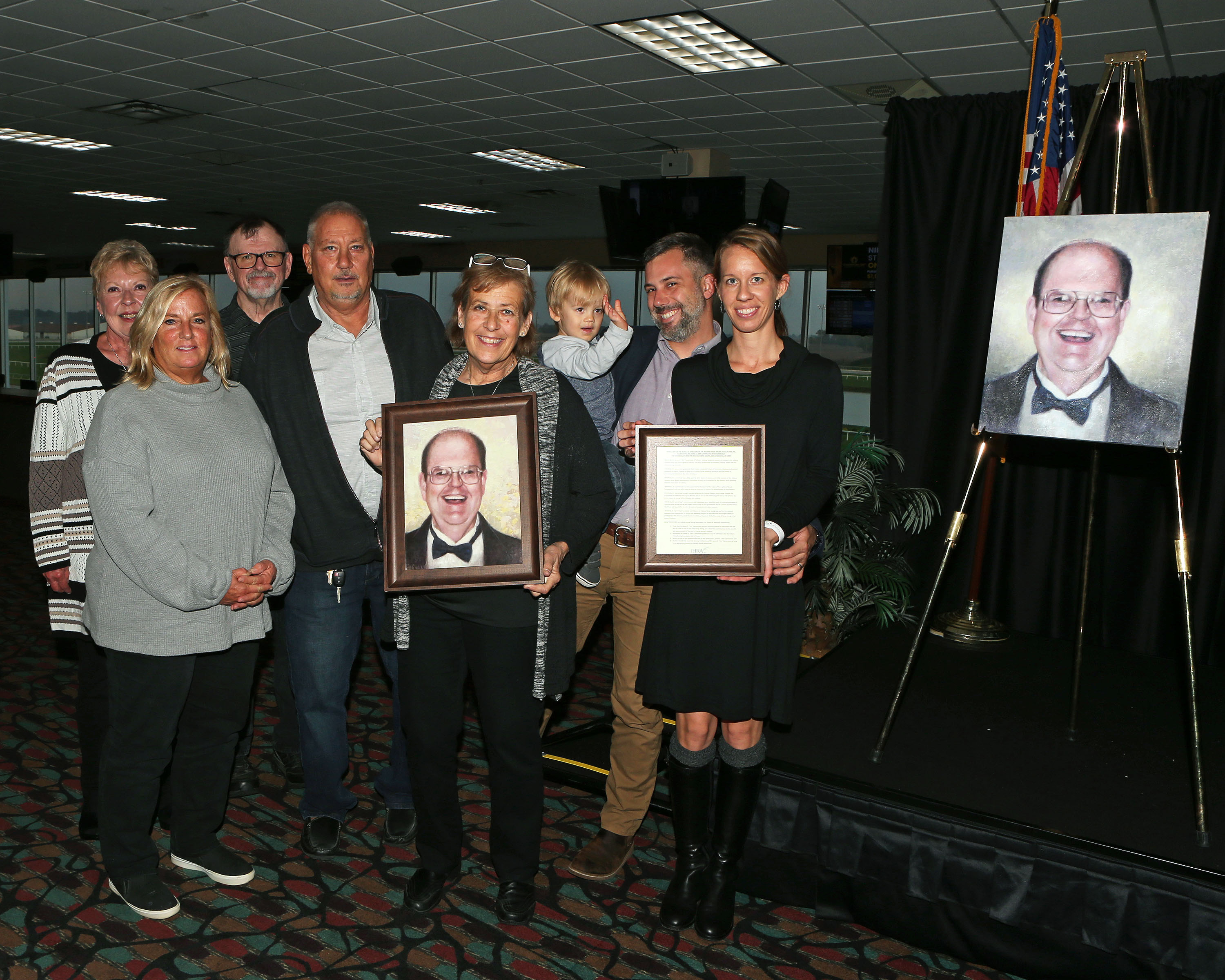 Following the induction of Carmichael, Rick Moore, Vice President and General Manager of Racing at Harrah’s Hoosier Park, provided a look at Ernie Gaskin’s life in racing. He arrived in Indiana in the early 1990s and it didn’t take long for industry leaders to recognize his expertise and leadership in the sport.

Gaskin was an initial member of the Standardbred Breed Development committee and brought a wealth of knowledge on racing from his days working as an assistant trainer for Bill Haughton, Hall of Fame driver and trainer.

Moore pointed out Gaskin’s endless hours working to establish a breeding and racing program in the state as well as his work on related projects such as lobbying for casino gaming at racetracks, enhancing the breed development funding, and providing positive solutions to better the sport.

Moore also noted Gaskin’s success as a trainer in the state. He has two leading trainer titles to his credit at Harrah’s Hoosier Park and conditioned four Indiana Sires Stakes champions in addition to hundreds of other horses that have prospered over the past 25 years.

Following the reading of the resolution by Moore, Gaskin was welcomed to the stage by a standing ovation before delivering an emotional heartfelt speech to the room.

“I have to thank my partner, my wife, Darla,” said Gaskin. “She should be in this photo with me. She has worked so hard right along with me to make racing a success in Indiana. One thing I learned from Bill Haughton is ‘surround yourself with good people’ and wow, what a great group of people we have here in Indiana. We have come a long way in the program and there are so many people who helped along the way. I’m so very proud of where we are now and what we have all accomplished.” 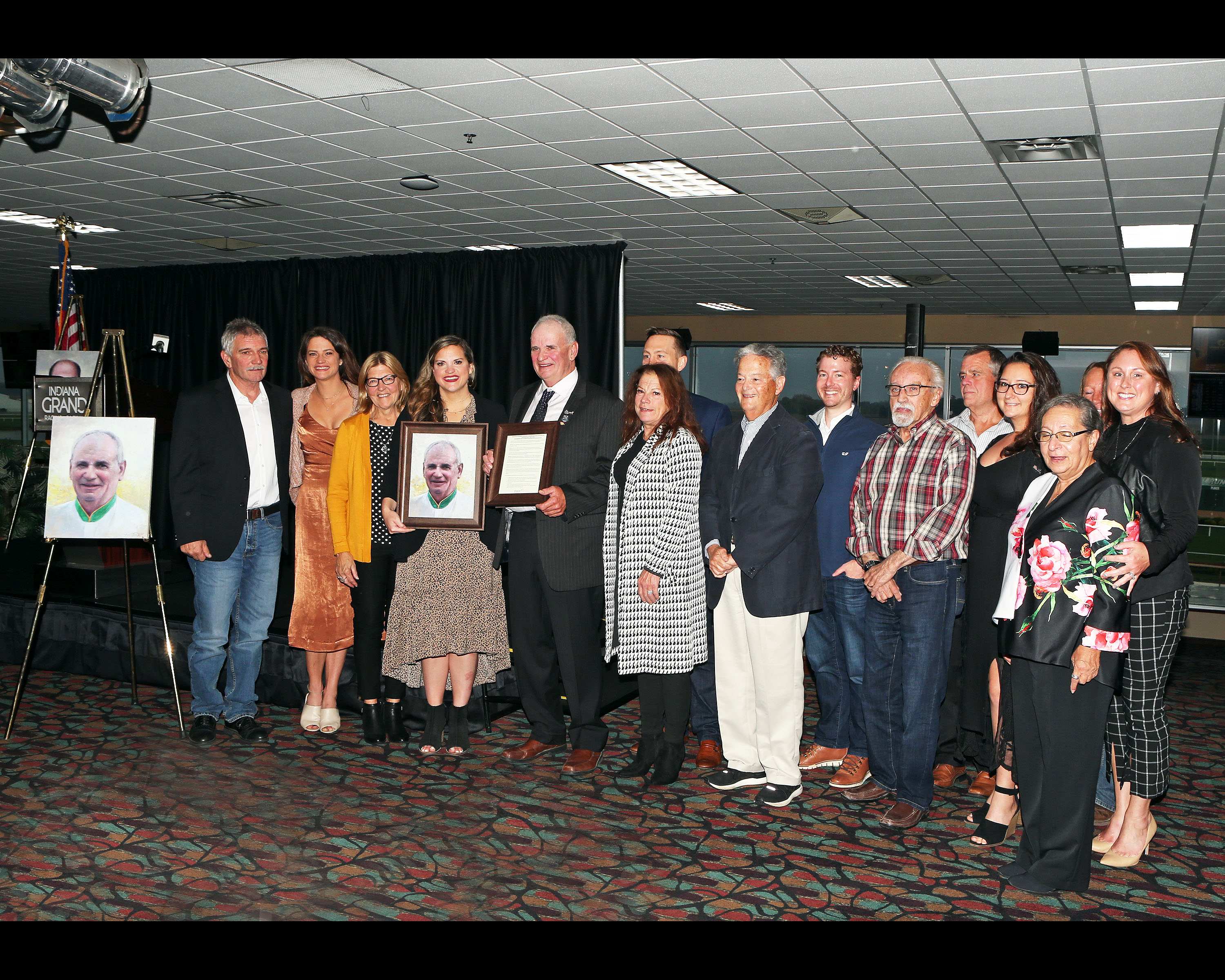 Ernie Gaskin (center, holding resolution) was one of two inductees into the Indiana Horse Racing Association Hall of Fame Sunday at Indiana Grand. He was joined by his family and friends for the ceremony.

Both portraits of Carmichael and Gaskin were painted by artist Melinda Spear-Huff of Sheridan, Ind. They will join the other 17 portraits on IHRA Hall of Fame display on the Mezzanine at Indiana Grand Racing & Casino.