JEFFERSONVILLE -- With one mighty push, Nate Milbourn landed in the end zone and Waldron’s inaugural 8-man football team had its first touchdown.

Waldron did not win but earned the respect of Rock Creek Academy, a Class A school in Sellersburg, who dropped down from the traditional 11-man football format to 8-man football this year.

“I like it for the numbers that we have,” said first-year Rock Creek Academy head coach Scott Woods when asked about 8-man football. “I’m liking it right now being this is my first game as a head coach at the high school level and I get a win.”

RCA quarterback Zach Clark completed 9-of-14 pass attempts for 199 yards and two touchdowns in a 36-16 victory in a game cut short due to inclement weather.

“It was exciting,” said Waldron coach Corey Barton, who serves as offensive coordinator with Chandler Miller acting as defensive coordinator. “We have some things to fix. We were getting beat over the top of the defense and that has to be fixed. They were just faster and taller on the outside.”

Waldron’s first game came without five rostered players, including the No. 1 and No. 2 quarterbacks. That pushed freshman Hunter Dodson into the signal-caller’s role and he handled it well. 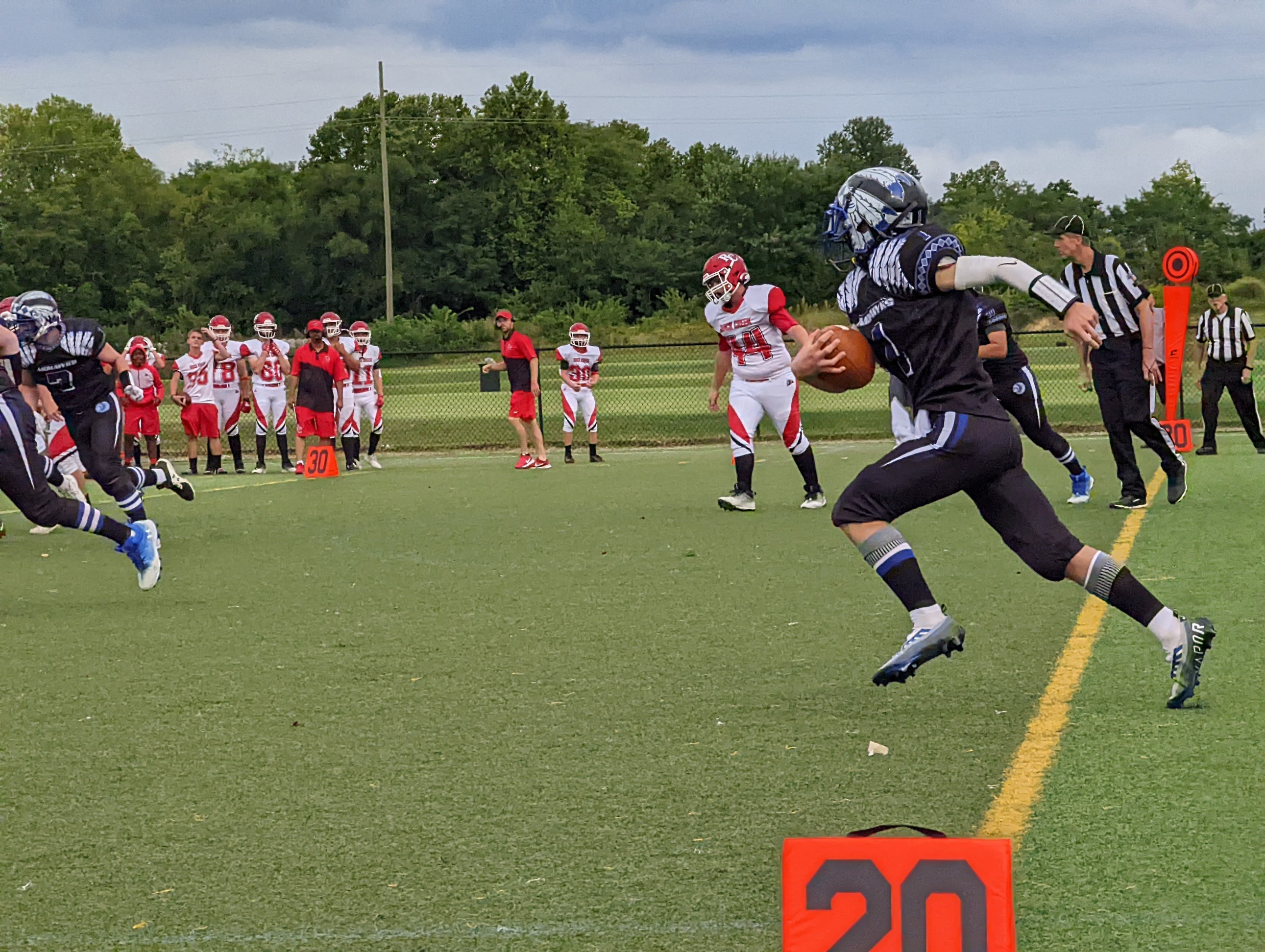 The diminutive quarterback (photo) carried the ball a game-high 25 times for 105 yards and connected with J.D. Smith for a 58-yard touchdown strike in the third quarter that cut the Lions’ lead to 22-16.

Dodson learned Thursday he had 48 hours to prepare to be the starting quarterback for the program’s first game.

“We didn’t try to stretch the field for much of that reason,” said Barton. “We didn’t get the repetitions to get the confidence (to throw the ball).”

Hunter Dodson completed the final two of his five pass attempts in the game Saturday and finished with 69 yards passing.

Starting quarterback Walker Dodson and reserve QB Cayden Balzen both were sidelined Saturday but should be available for a week two matchup with Irvington Christian in Waldron. 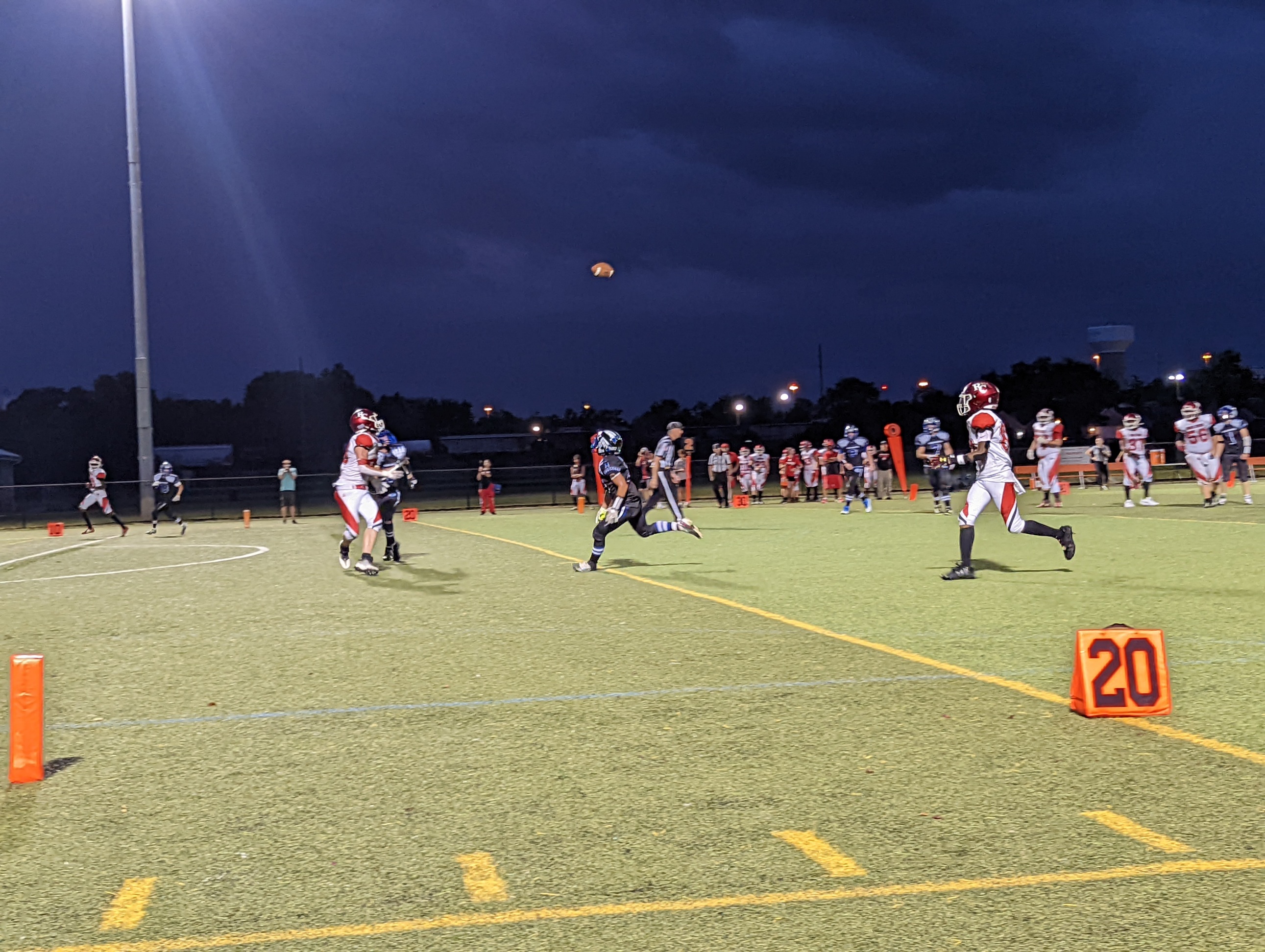 Waldron was the better team in the first half but didn’t close out with the lead and struggled to contain Rock Creek Academy receiver Ryan Ingram (photo), who finished with five catches for 87 yards.

“It was an amazing first half,” said Woods. “(Waldron) came out and punched us in the mouth and got up real quick and caught us off guard. We had to make some adjustments on defense and with those adjustments we were able to stop them a little bit.”

Dodson fumbled near midfield to end Waldron’s first-ever possession but the freshman intercepted a Clark pass attempt near the 15-yard line and returned it 50 yards to the RCA 35.

Dodson got loose for a 21-yard run down to the Lions’ 4-yard line and Barton went to the “heavy” package to finish off the drive.

Milbourn, a junior listed at nearly six-feet tall and 334 pounds, took the direct snap behind Waldron’s 3-man offensive line, stepped left and barreled into a group of defenders who slowed him down but didn’t stop him. With the offensive linemen pushing the pile from behind, Milbourn landed in the end zone. Dodson ran in the 2-point conversion attempt to complete a piece of history for Waldron football.

“It was not drawn up to get Nate the first touchdown in history,” admitted Barton. “Nate is nimble enough and I knew he could carry some guys. The situation just worked there.”

Milbourn has been part of Barton’s youth football program in Waldron since he was in second grade. He has continued over the years to pester Barton about the creation of a high school program. On Saturday, he was rewarded for his dedication.

“He’s a kid over the years that was always working toward this day to get a high school team,” said Barton.

The Lions got on the scoreboard midway through the second half when sophomore Dylan Parente crossed the goalline from six yards out. Parente was part of Rock Creek Academy’s 2021 football team that finished 1-8 and was outscored 426-70.

The 2-point conversion pass failed and the Mohawks still had the lead 8-6.

Waldron fumbled on a double-reverse play on its next possession and had a drive stall out on its final possession of the first half because of three penalties.

Following a punt and good return, the Lions took possession on the Waldron 25 with 12.8 seconds left in the quarter. Clark hit Zion Barnes in stride for a momentum-stealing touchdown. Clark ran in the 2-point conversion and RCA took a 14-8 lead into halftime.

“Staying positive,” said Barton of the halftime message to the Mohawks. “We needed to find energy and effort. We were tired, spent and beat up a little bit, but we were not giving up.”

Rock Creek Academy scored on the first play of the second half with Clark finding Barnes for a 31-yard touchdown pass and catch. The 2-point conversion pass to Graham was good and the Lions extended the lead to 22-8. 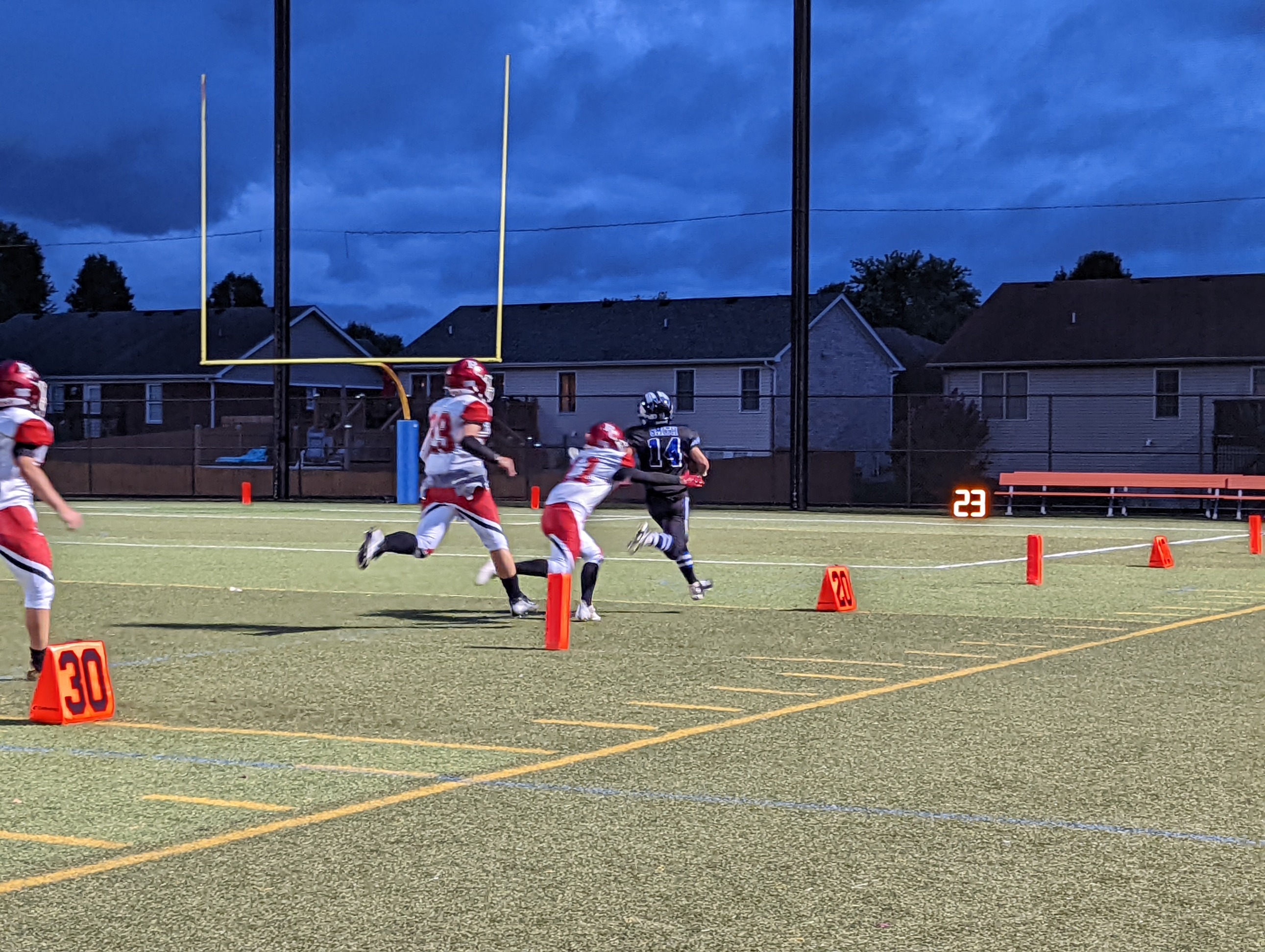 Waldron answered right back with Dodson hitting Smith (photo) for a long touchdown play and Ethan Richardson finished off the 2-point conversion run to make it 22-16.

However, the Lions scored on their next two possessions with Clark finishing off a drive with a 3-yard scoring run (2-point conversion failed) and Parente racing 47 yards for another touchdown early in the fourth quarter.

“First of all, the win tonight means everything for Rock Creek,” said Woods. “It’s a tradition we are trying to build. So getting a win, even under these circumstances, which is awful. They could have obviously had a chance to come back. I hate that for Waldron.

Waldron took its first loss and invaluable experience from its long trip down to southern Indiana. Barton expects to have Waldron’s 20-man roster nearly intact for a week two matchup with Irvington Christian in what is expected to be a festive experience nearly a decade in the making – Waldron’s first ever home high school football game.

“It’s going to be awesome,” said Barton. “We will rock it out next weekend.”