Physical size is not a requirement for leadership responsibilities.

Cael Lux, listed as five-foot, six inches and 134 pounds, was converted from safety to linebacker this season at Shelbyville to take advantage of his tackling skills.

Lucas Kleeman, 5-7, 175 pounds, has been groomed to be the Tigers’ defensive leader since he showed up at the high school level as a freshman.

Both lead by example at practices and on Friday nights where Lux is leading the Golden Bears in total tackles while Kleeman is third for a Tigers squad ranked No. 9 in Class 2A.

“It’s been pretty smooth honestly,” said Lux of the transition from defensive back to linebacker.

He closed out his junior season with 35 total tackles in seven games. Through the first four weeks this season, he already has 60 tackles (40 solo/20 assists) and an interception.

Lux first learned of the position switch in the spring from Glesing.

“My first thought was I have to play with some big boys now,” said Lux. “I can’t come up and fly and make tackles anymore. I have to shed a lot more blocks usually.”

Able saw Kleeman’s defensive capabilities early on in his career.

“He loves to play football,” said Able. “When he was a freshman, we knew he was going to be a hitter. He has never backed away from that.” 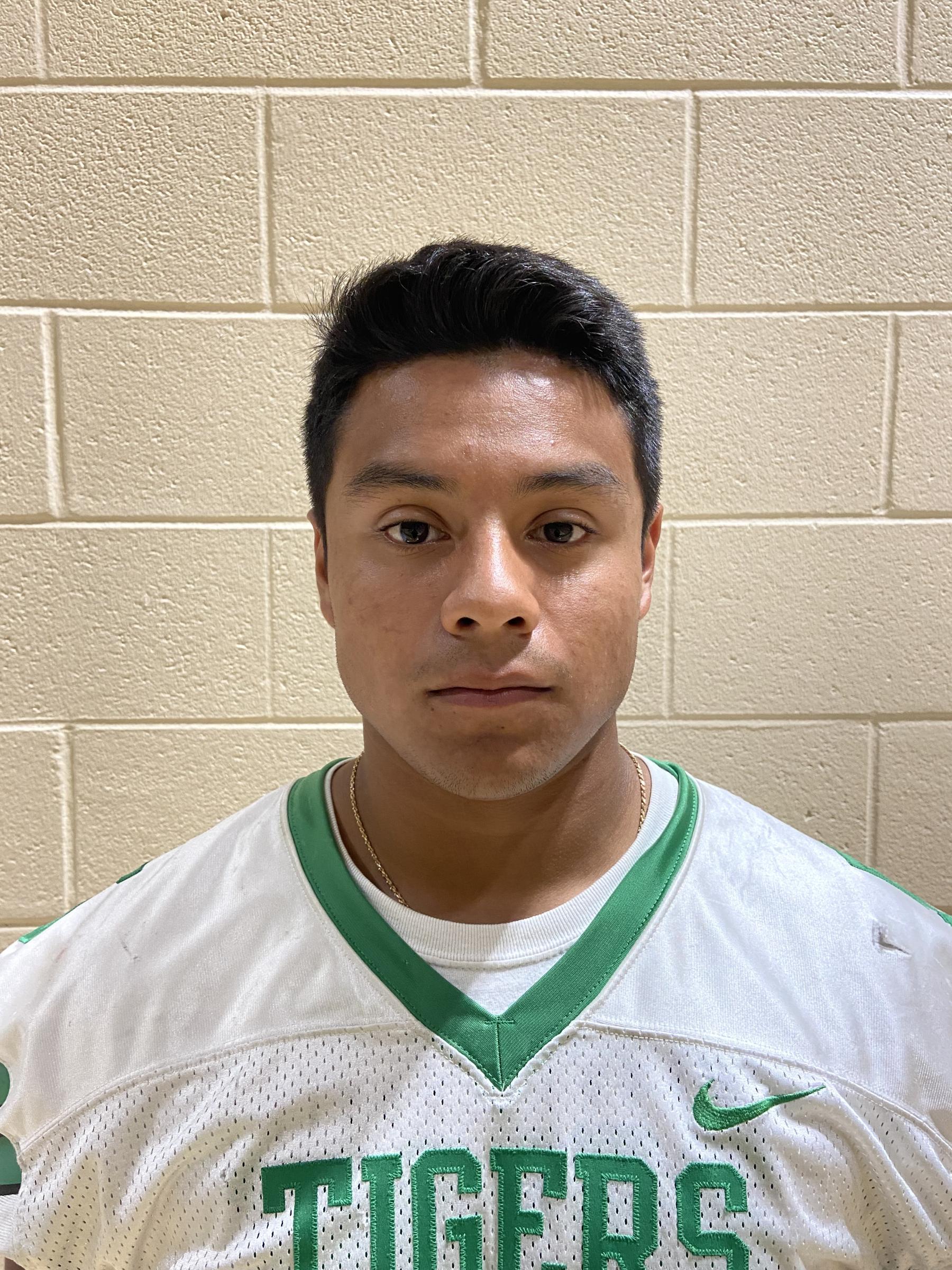 Kleeman (photo) delivered an authoritative “stick” Friday in Monrovia, completely shutting down a fourth-and-short attempt that resulted in Triton Central taking over on downs. The running back saw the hole open between two linemen but never saw Kleeman, who arrived and made a statement.

“It’s hard but sometimes I think it plays to an advantage a little because I can weave in and out,” said Kleeman of being a smaller linebacker. “As long as I can get their hands off me, I can use my speed and quickness and my IQ. It’s hard but I like the challenge.”

After each Friday night game this season, Kleeman has addressed the team to set the tone for the next challenge that lies ahead.

“I’ve had some great leaders in the past with Luke Hornung and Hayden Kermode showing me how I should lead the team,” said Kleeman. “I am passing their knowledge on. I’m just trying to lead the next people on the team so we can have more leaders to come.”

Lux admits being vocal is not his strong suit but he recognizes it’s a growing part of his leadership duties.

“Usually I am not a big talker but this year I kind of have to be,” he said. “I know more than anyone else on the field. I have more experience. I have to be more vocal this year.”

On Friday in Shelbyville’s 22-20 victory over New Castle, Lux had 10 total tackles and his first interception of the season. He is making an impact on the Golden Bears’ defense that Glesing admits will be hard to replace when he graduates.

“He is making 10-12 tackles a game,” said Glesing. “That will be a big hole to fill in the future. Who is going to make those tackles?

“And offensively, he is running the ball. He doesn’t come off the field very much. He is a jack-of-all-trades and he is 5-6 and 135 pounds. He has a lot of guts and a lot of courage.”

Lux made his linebacker debut in week one this season against Greensburg. There were definitely nerves involved when he took the field for the first time.

“Oh yeah,” said Lux with a smile. “We played a lot of our base defense and I played a lot of middle linebacker. It’s a lot bigger kids coming at you than those wide receivers.” 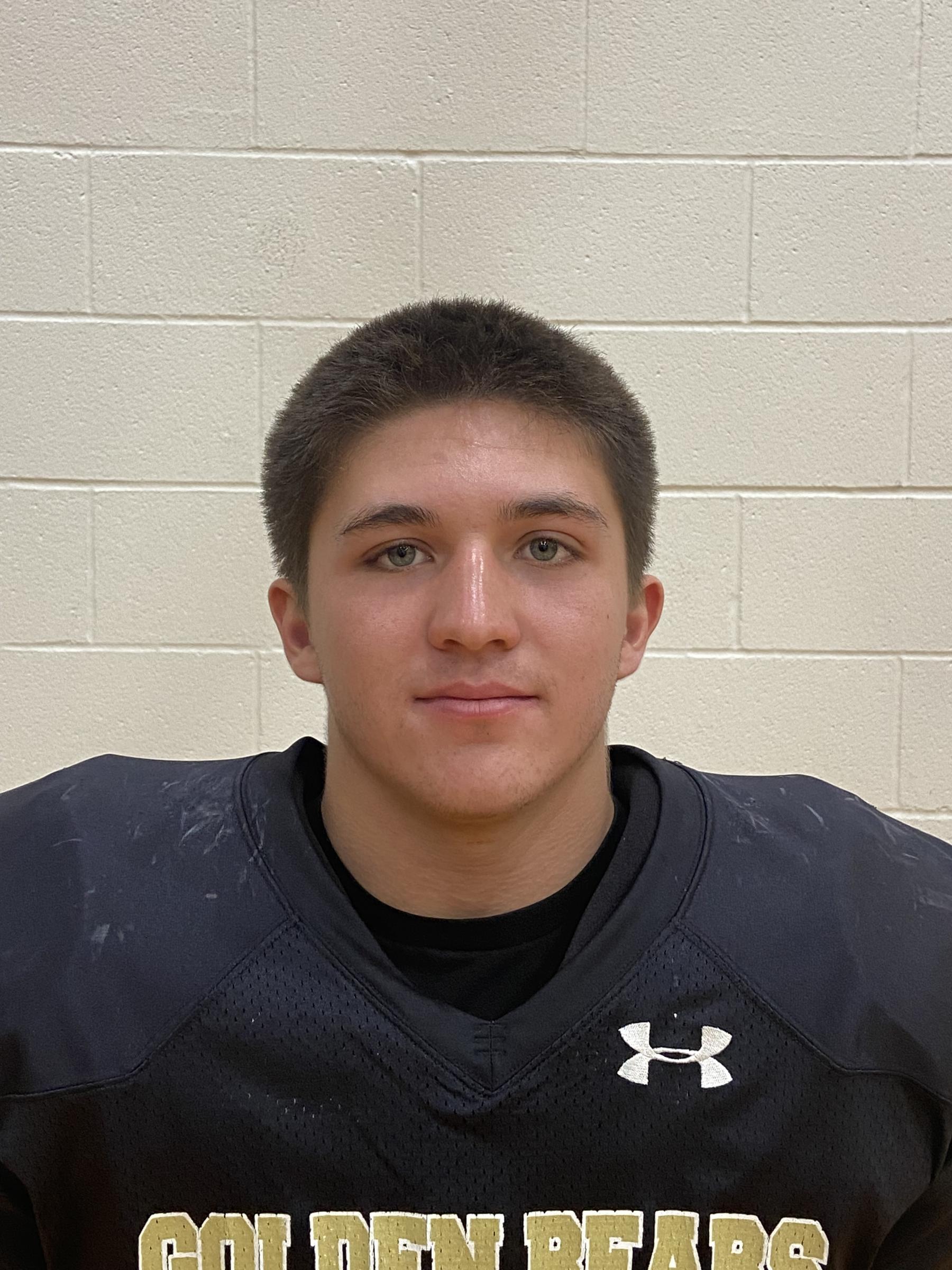 Lux (photo) rewarded the coaching decision with a 22-tackle performance in Shelbyville’s 35-21 loss.

“We knew he could do it,” said Glesing. “It was what the team needed and he didn’t hesitate.”

Kleeman was Triton Central’s leading tackler as a junior.

“He is a very cerebral defender,” said Able. “He is very feisty, gritty and ultra-competitive.”

That made TC’s 54-41 loss in week three to Class A, No. 1 Lutheran disappointing.

“That is something that just kills you,” said Kleeman. “We played a great game on offense and we fought back and battled back. Knowing if we can put a little more effort into the defensive side, that could have been a different story.”

Triton Central’s defense bounced back in Monrovia Friday, allowing a long game-opening drive that ended with a field goal before stifling the Bulldogs’ offense the rest of the contest. In addition, the school system closed out a tough week that followed the death of  a student, Nick Winter, in an automobile accident.

“It was a tough week of practice,” Kleeman admitted Friday after the win in Monrovia. “We were facing a lot of adversity and a lot of distractions. Nick’s brother came in and talked to us and that really made a difference for some of us on the team. It really made us think about Nick and making decisions.

“It was tough and we fought through it. This one was for him.”

Triton Central (3-1) hosts Indian Creek (3-1) Friday at Mendenhall Field. Shelbyville (1-3) hosts Class 4A, No. 10 Greenfield-Central (3-1) at McKeand Stadium. Homecoming festivities will take place at both Shelby County schools. Kickoff is set for 7 p.m. in each game.