WALDRON -- Cayden Balzen only gets one shot at a high school football career. A severely sprained ankle is not about to slow him down.

Balzen sprained his right ankle again early in the first half Saturday during Waldron’s 8-man football game against Rock Creek Academy. That same injury forced him to miss Waldron’s season opener two weeks earlier against the same Lions in Jeffersonville.

The Waldron senior got the ankle taped up and went back to work in the rematch Saturday night in front of a raucous Mohawks crowd.

Balzen scored three second-half touchdowns to deliver Waldron a 48-40 victory that improved its record to 2-1 this season.

“It’s hurting a bit but we taped it up enough that its stiff,” said Balzen after celebrating Waldron’s second win in five days – both at home. “It also happened Tuesday. There is so much tape right now. We worked through it.”

Balzen and junior starting quarterback Walker Dodson did not play in the program’s inaugural loss, 36-16 at Rock Creek. On Tuesday, the Mohawks defeated Irvington Prep, 36-26, in Waldron for its first victory.

Balzen had 97 rushing yards on five carries and a touchdown. Dodson rushed for 70 more yards and two touchdowns.

“The two kids, we were missing them first time against Rock Creek,” said Waldron coach Corey Barton. “Those two are the best athletes, a junior and a senior that are strong and fast. They are tough kids and we rally around those two.”

The five-day turnaround for a game is difficult for an 8-man team that only has 20 players on its entire roster. 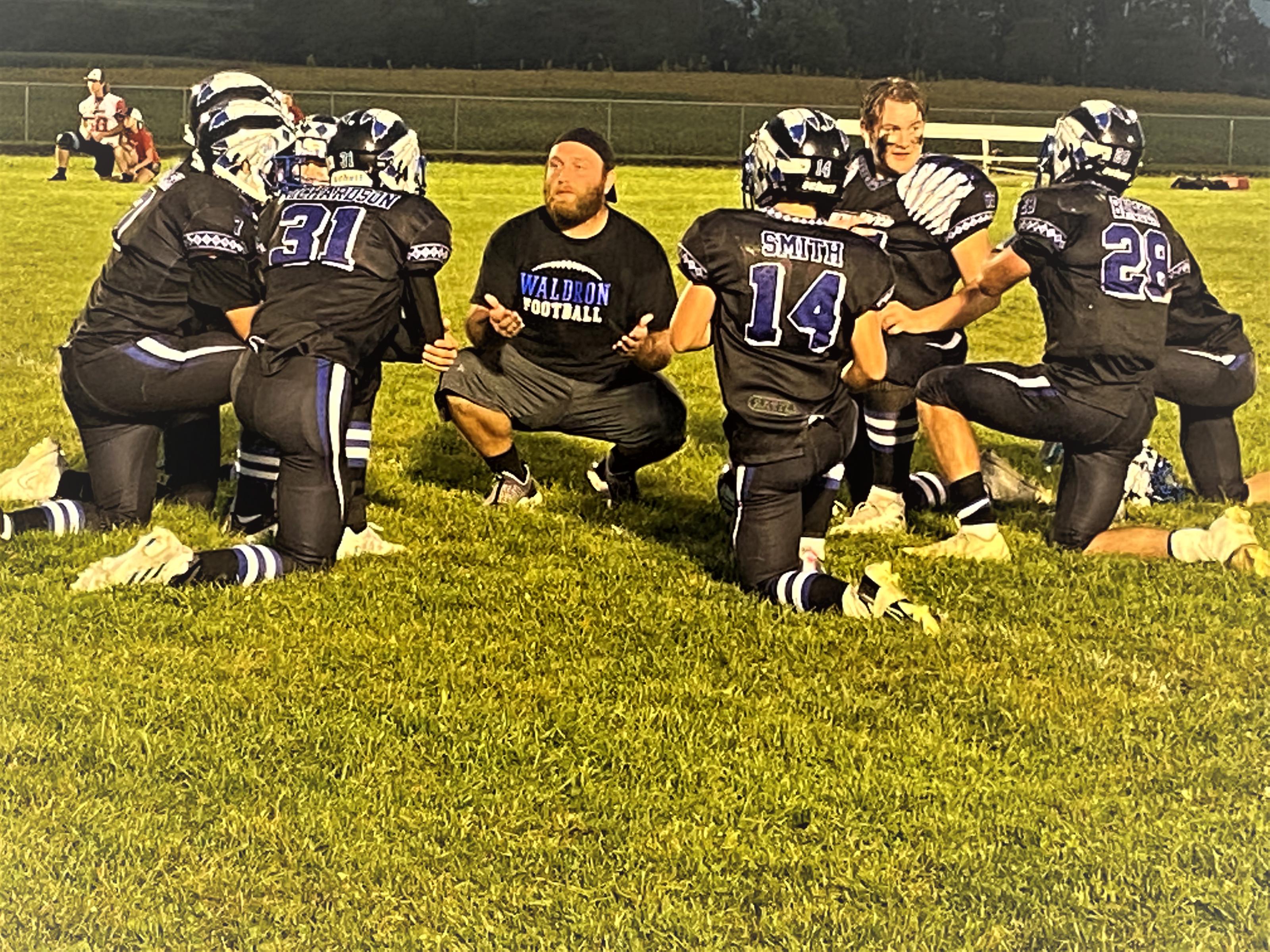 Waldron needed just two plays to answer back. Following a Balzen 13-yard scamper, Hunter Dodson, who played quarterback in the season opener, fumbled and recovered to run 52 yards for a touchdown. Balzen completed the drive with a 2-point conversion run and the game was tied again before one minute ran off the scoreboard clock.

After forcing the Lions to punt on their first offensive series, Walker Dodson got loose and ran 45 yards for a touchdown. Hunter Dodson ran in the 2-point conversion to make it 16-8. 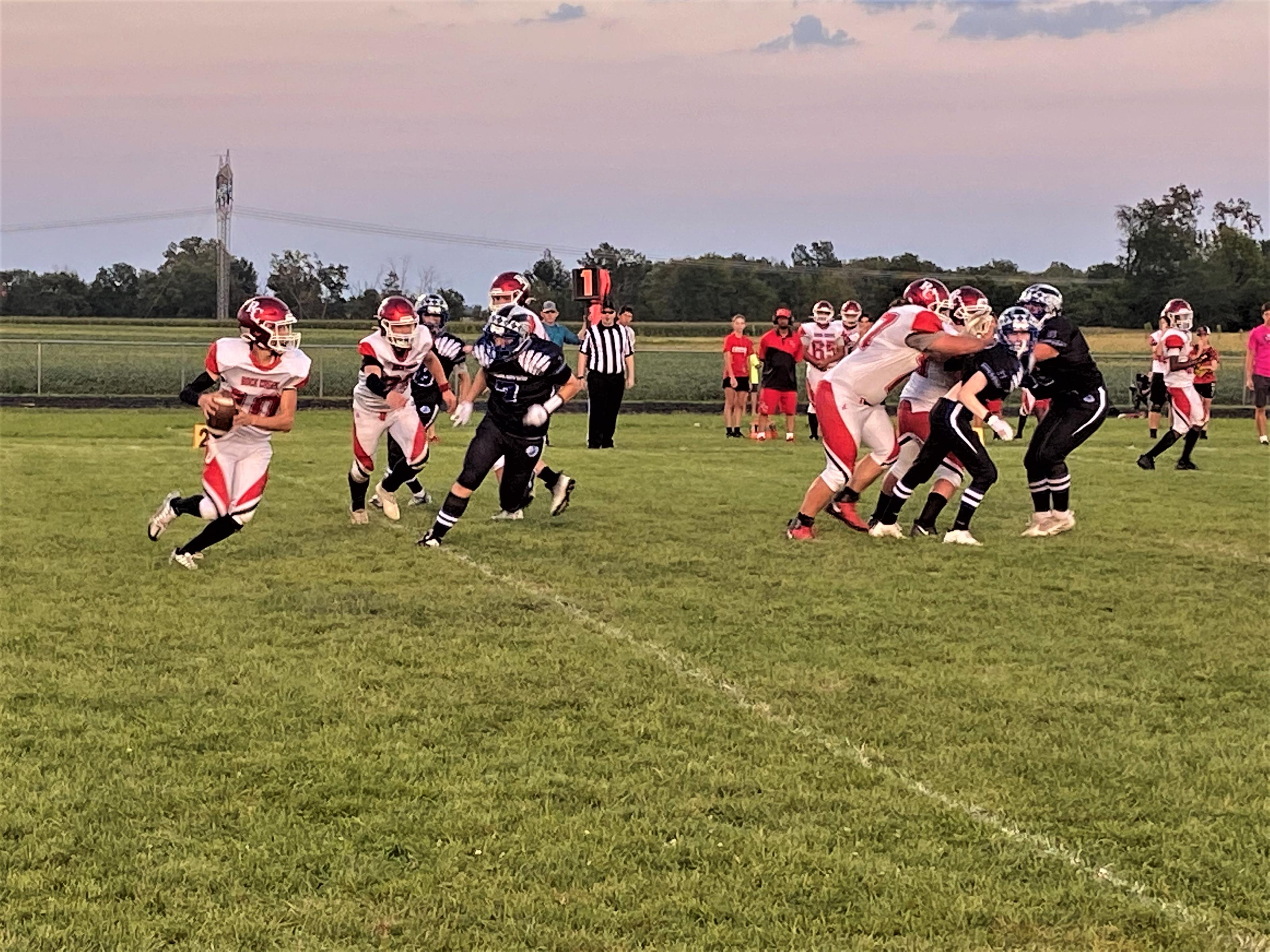 Following a Waldron turnover on its next possession, Clark (photo, left) hit Ingram for a 49-yard scoring strike and Dylan Parente rumbled into the end zone for the 2-point conversion to tie the game again with just over three minutes left in the opening quarter.

The Lions (1-2) would not trail again until midway through the fourth quarter.

Balzen collected his first touchdown of the night late in the second quarter with a 28-yard run.

The Lions scored before the half ended when Parente, now playing quarterback after Clark was injured, hit Barnes for a 22-yard TD reception. The 2-point conversion failed and the Lions led 28-22 at halftime. 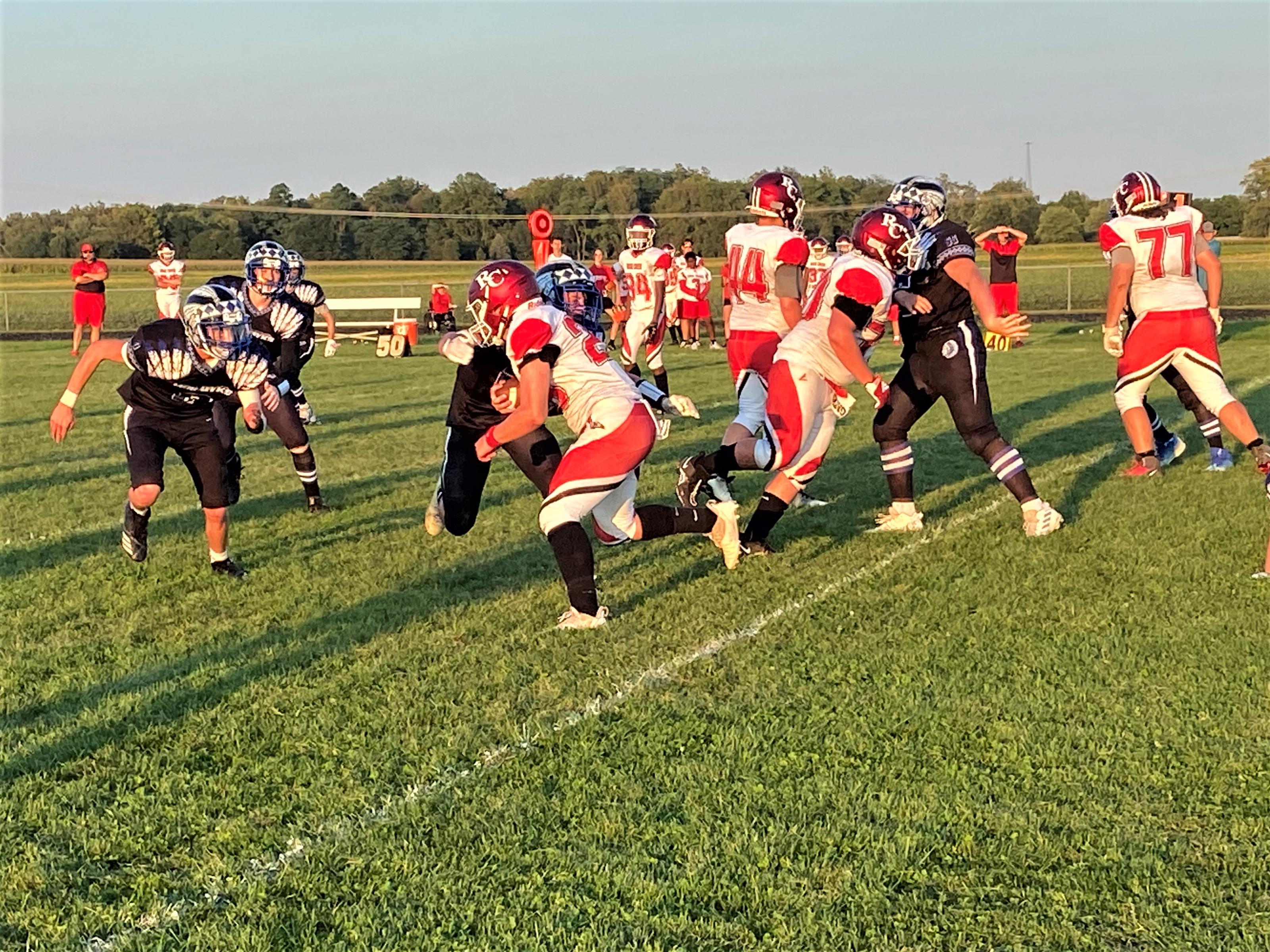 Both teams scored touchdowns in the third quarter and failed converting the 2-point attempts. Balzen sprinted 23 yards for his second TD with 9:13 left in the third quarter. Starks broke free for a 53-yard run just 20 seconds later and Rock Creek led 34-28 going into the fourth quarter.

Without Clark, Rock Creek’s passing game was limited and the Mohawks took advantage with four second-half interceptions – two each from Walker Dodson and Hunter Dodson.

Waldron tied the game again early in the fourth quarter when Walker Dodson hit Balzen for a 22-yard TD. The conversion failed again and it was 34-34 with 9:05 left.

A Rock Creek turnover put the Mohawks back in business at the 23-yard line. Four plays later, Walker Dodson put the ball in the end zone and Balzen raced into the end zone for the 2-point conversion and the Mohawks’ first lead, 42-34, since midway through the first quarter.

An interception stopped the Lions’ next drive and the Mohawks needed one first down to run out the clock.

Back-to-back runs by Balzen netted seven yards but consecutive false start penalties pushed Waldron into a third-and-13 situation from its own 37-yard line.

Barton called Balzen’s number one more time and the senior delivered. Walker Dodson took the snap and rolled to his left. Balzen slipped the line of scrimmage and moved into the flat where Dodson lofted him a pass. He turned toward the end zone and raced untouched for a 63-yard touchdown that made it 48-34.

“All I had to do was catch it and go – icing on the cake,” said Balzen.

For more on the first meeting between Waldron and Rock Creek Academy, go to https://shelbycountypost.com/sports/650994

“We ran it last drive and I saw a weakness on their defense,” explained Barton. “I called another pass to that weak side but they were catching on to the formation we were in and packing the line of scrimmage. I knew with a little bit of a hesitation, a little fake and go deep. (Dodson) got it through and complete to where we wanted it. I knew it would work.”

Rock Creek answered right back with Barnes collecting his third TD reception, this one a 57-yard catch and run that gave the Lions hope.

Waldron prepared for the onside kick with 31 seconds left but Parente could not keep it in bounds. Walker Dodson took a knee and the Mohawks celebrated a hard-fought victory.

“This is a dream,” said Balzen. “It’s what you picture high school being like … it’s like in the movies almost. I can’t even explain it. I am so excited.”

Balzen had four catches for 116 yards.