Right at four minutes into the Class A, Sectional 42 championship game, Owen Stringer struck for a quick goal to give Southwestern a stunning 1-0 lead over Indianapolis Lutheran.

“Stunning” because the two squads played to a scoreless draw just over three weeks earlier. The goal allowed the two-time defending sectional champions to settle into the often-physical contest.

That one-goal lead held up until late in the second half when Constant Martinez used his head to flick a throw-in from Jonah DeArmitt on goal for a 2-0 lead.

Lutheran added a goal with 32 seconds left but it was not enough to keep Southwestern from winning its third-straight sectional championship Saturday night on its home field.

“They play a lot of guys back. We watched film this week and we saw them play in the sectional, they play four back and their three midfielders are always behind the ball,” said Southwestern head coach Taylor Meredith of Lutheran’s defensive-minded approach. “They have a lot of low-scoring games. We knew it would be low scoring. Definitely to get the goal in early was some relief and a little cushion.”

Following a Lutheran foul just over three minutes into a rough first half, DeArmitt delivered a free kick on goal that was not cleared and ended up with Stringer, who punched the ball past goalkeeper Porter Miske for a quick lead. 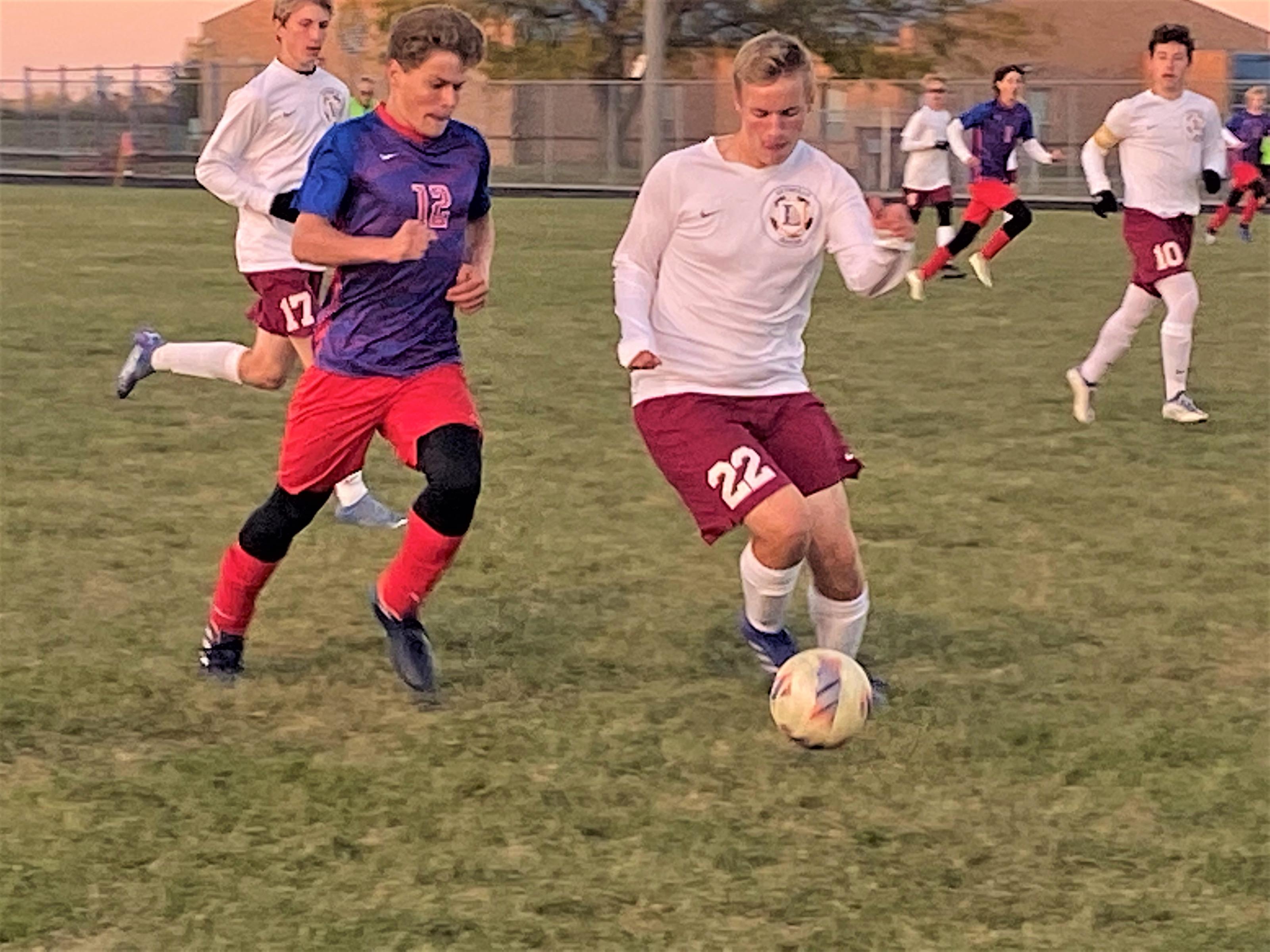 “It was really high tension there for a little while,” said Garreth Stringer (photo, left), Owen’s twin brother. “We scored and we kind of realized we can actually score against them.”

Two yellow cards, one per team, were issued in the first half and a second captain’s meeting was held at midfield at halftime to settle both teams down.

Both squads kept attacking in the second 40 minutes but struggled to find a decisive goal.

Southwestern was in full defensive mode over the final 10 minutes and caught lightning in a bottle when DeArmitt delivered a long throw-in at the goal. Martinez headed the ball on goal and it cleared the defenders and Miske and rolled into the far corner of the net.

“That was awesome,” said Garreth Stringer. “It went right over my head. I just moved out of the way and let it go through. That was an amazing header by Constant.”

Martinez is an exchange student from France.

“He did that the first game of the year against Knightstown,” said Meredith. “To see him do it again in the tournament is really cool.”

Southwestern goalkeeper Michael Clements made a spectacular diving save late in the contest just ahead of Elliott Cook getting a shot past him inside the final minute.

Lutheran (6-10-2) never got another look on goal before the celebration began for the Spartans.

“The only thing I know about Covenant Christian is they beat Bethesda Christian tonight,” laughed Meredith. “Sometime tomorrow (Sunday), we will get some emails sent out and track down some film and call some coaches and have a couple of days to prepare for them.”