Posted About Three Months Ago by By John Hartnett Jr.

The installation of synthetic field turf at Shelbyville’s J.M. McKeand Stadium for the 2023 season will signal the end of the natural grass surface era for Golden Bears football.

The update is a sign of the times as football programs throughout the state and country are consistently opting for the revolutionary brand of turf that requires significantly less maintenance and is much more resilient. The improvement is part of a multi-year process of development that has seen the Shelbyville Central Schools system embark on a series of enhancements to make its athletic facilities state of the art and comparable to other high-quality programs.

SHS football has played at three home sites since its inception.

The program began hosting games at the “old athletic field” located between Meridian and South West Streets on the city’s south side. The block-long field was the home of Shelbyville baseball as well.

The football program moved across the street to the Meridian Street field (currently the location of the city’s Meridian Park Family Aquatic Center) for the 1952 season and the Bears played at that venue for the next 26 years.

McKeand Stadium at Shelbyville High School was dedicated in August of 1977 and is named in honor of legendary Shelbyville coach and Indiana Football Hall of Fame member J.M. McKeand.

“Opposing coaches used to comment about the amazing condition of the Meridian Street field,” said long-time assistant football coach Dennis Hearne. “Ori Oldham was the field caretaker and he took great pride in keeping it in prime condition. After a few years at the high school location, Mathies Landscaping took over maintenance of the field at McKeand Stadium.”

The end of the 46-year grass era at McKeand Stadium brings to mind a history of some excellent teams and exceptional individuals who played on the field.

The newly-created complex opened under the direction of head coach Tom Hession following a road loss at Franklin Central.

“We played Anderson Madison Heights and lost 20-10,” said Keith Limpus, a three-sport SHS athlete who was a junior quarterback at the time. “I remember the field as being really rough. That area had been converted from a huge corn field that had been there for many years and that was evident.”

There were many other standout SHS players who participated in that inaugural contest including Rusty Bryan, Jim Sprong, Barry McKenney, Brian Lay, Warren Maloney and Airl Coffey. Maloney became a four-year regular for the Franklin College Grizzlies and Coffey would go on to be a starting defensive end for three years at Anderson University.

Randy Robertson succeeded Hession and his 1980 team completed a solid 5-5 campaign against a rugged schedule. Senior captain Scott Olinger was named to the Indiana All-Star team that year. Olinger later played for Butler University on their 1983 Heartland Conference championship team and was twice selected as a member of the all-conference team.

“I played with some great teammates in high school who understood how to compete,” stated Olinger. “Shawn French was an excellent quarterback and we had solid players like Chuck Roesler, Jim Preidt, Doug Strobel, Gary Stewart, Victor Buchanan and Todd Babbitt. I think the season’s highlight was defeating Rushville at McKeand for our fifth win in the last game of the season. That was the best Shelbyville record since 1976. McKeand holds a lot of great memories for me.”

The 1984 Shelbyville team was replete with talent and marched through the regular season undefeated with a 10-0 record. The team won the South Central Conference title and defeated SCC powerhouses Martinsville and Center Grove along the way. 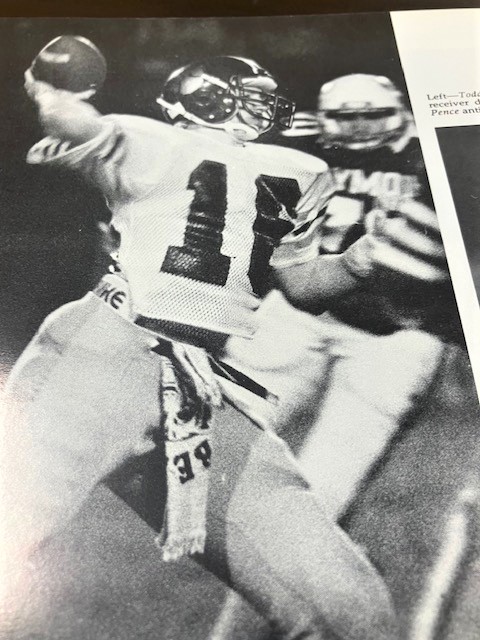 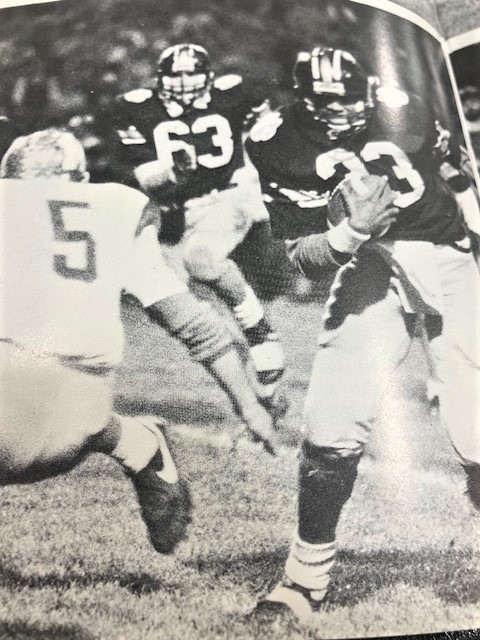 In addition, the 1984 Golden Bears were loaded with outstanding linemen and defensive players. Joe Myetich presented a huge presence and routinely dominated the line of scrimmage. Brian Lawson was a formidable defensive player and handled the kicking duties.

Coach Hearne was in charge of the line that year: “That group of linemen developed a cohesiveness that was very impressive,” said Hearne. “They became very commanding. Bringing Dana Mathies to guard filled an offensive void. Brad and Pat Pope were defensive ends that applied constant pressure. Then, we had Joe Gibson, Greg Soller and Craig Lawson. That entire team was among Shelbyville’s best ever but I cannot imagine SHS ever having better linemen.”

Postseason play was limited at that time with only a few teams qualifying. The Bears lost a heartbreaking, hard-fought first-round game, 7-3, in a rematch with Martinsville at McKeand Stadium.

The 1989 Shelbyville team became the first to win a sectional game as the Golden Bears outlasted Delta in overtime at McKeand. Val Phares recovered a Delta fumble to preserve the victory.

The Golden Bears beat Anderson the following week before losing in the sectional championship at McKeand to East Central and finishing 6-5. Tim Ewing was a bruising runner all season and was complemented by a solid line on a team that made steady progress. The Golden Bears suddenly seemed to click right around the season’s midway point.

“Something turned in the spirit of the team during our one-point loss to conference champion and undefeated Martinsville,” said Golden Bear lineman and 1989 Kiwanis Football Award recipient Curt Johnson. “At that point, we began to believe we could compete and win. We reeled off three consecutive wins including a thrilling overtime home victory over Rushville (and future Shelbyville Central Schools superintendent Matt Vance). The loss to Martinsville and a narrow two-point regular-season finale loss to Columbus East provided us a sense of self-belief that spurred our sectional run. I think we are all very proud of what we learned and achieved that season and that we were the first Golden Bear team to win a tournament game.”

Some special McKeand moments occurred during difficult seasons. In 1996, SHS would go 3-7 but won a thriller against Columbus North. Ryan Claxton ran for four touchdowns and caught the winning two-point conversion in the 43-42 overtime win at home over the Bulldogs. The Bears had trailed by 21 points at the half and mounted an impressive comeback to send the game into overtime. Claxton ran for 222 yards in the contest.

Charlie Boger also eclipsed 200 yards rushing during Shelbyville’s 2-8 season in 1993. Boger had remarkable speed and accounted for long touchdown runs of 75 and 65 yards in the Golden Bears’ home win over Seymour.

Shelbyville boasted a number of exceptional players during the late 1990s and early 2000s. Mark Drake was a very capable quarterback who ranks second on the all-time passing list for career yards. After a string of losing seasons, he directed Shelbyville to a 6-6 record in 2000.

Drake will be on the radio broadcast of tonight’s sectional opener at McKeand Stadium.

For a preview of tonight's sectional game against Bedford North Lawrence and how to listen to the GIANT fm broadcast go to: https://shelbycountypost.com/sports/658486

The Golden Bears were a combined 15-8 in 2002 and 2003. In 2002, quarterback Cody Fair guided the 8-4 Bears to a sectional final game against Roncalli. In 2003, Brett Claxton was Shelbyville’s leading rusher and played linebacker as the Bears finished with a 7-4 mark.

The period 2007 through 2009 stands as the most prolific stretch in Golden Bears football history, with the program compiling a 29-6 record during that period. 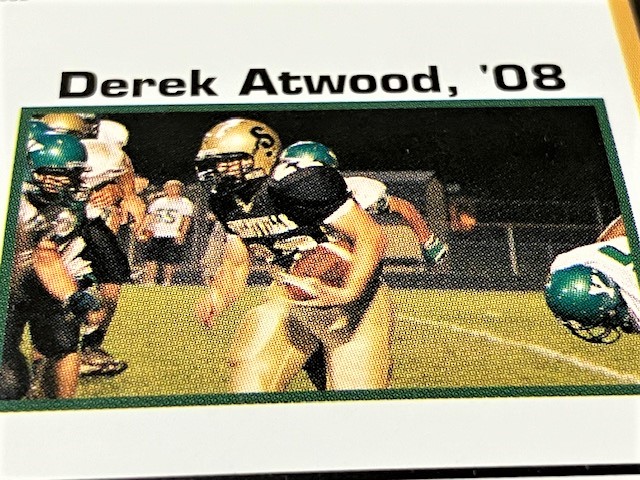 “That is once in a lifetime talent for a football team as far as running backs go,” said former SHS assistant coach Scott Fitzgerald. All three rank among Shelbyville’s top career rushers.

Fitzgerald was Shelbyville’s offensive coordinator from 2003 through 2017 under head coach Pat Parks.

“The important element about that group is that they were smart and dedicated,” continued Fitzgerald. “So many of them have gone on to have success as adults. That is no surprise.”

The 2007 squad posted an undefeated regular season and finished 11-1, losing at Columbus East in the sectional final.

The 2007 team recorded winning margins of three touchdowns or more in eight of eleven games. Shelbyville’s closest regular-season contest was a 27-24 win over Mount Vernon at McKeand Stadium that went down to the wire.

Senior Kris Skipton was the starter at quarterback in 2007 and 2008 and provided essential leadership to a talent-rich ensemble. Kevin Prosch played offense and defense for three seasons and holds the Golden Bear record for career interceptions. He took over at quarterback for the 2009 campaign and guided the Bears to a 9-3 record. Jesse Beckner was another great competitor who played on both sides of the ball.

Other significant contributors during the period were Michael Hardesty, Michael Pierce, Will Thornburg and Shotaro Sano. Sano was extremely effective as a linebacker and offensive lineman. He rarely came off the field.

“One key to us being so strong during those years was the defensive end play,” said Fitzgerald. “From 2000 or so on for many years we had tremendous defensive end play from guys like James Douglas, Adam Gaudin, Troy Johnson, Robbie Cox and Nolan Kaster, to name a few.”

Jake Laker, class of 2013, is second in rushing yards for a season. DeShaun French, 2016, holds the second-place spot for career rushing yards. Both were versatile runners with sprinter’s speed who turned in several electrifying performances on McKeand’s natural grass field.

Shelbyville teams compiled a 23-8 record from 2015-2017 and seemed to hold a a special affinity for the friendly confines of Mckeand, posting 15 wins against only three defeats there.

“Those teams had some great athletes as well,” said Fitzgerald. “John Lux (SHS all-time leading passer) was a tremendous quarterback and Damon Lux (SHS all-time leading receiver) had a very good career as a runner/receiver. Sam Lewis and Cooper Lewis, Nick Brokering, Nolan Ray (SHS leader in career tackles) and Luke Reed were all major components of those successful teams.”

John Lux and Brokering continued their football careers as starters at the collegiate level. Damon Lux accepted a scholarship to play baseball at Duke University. 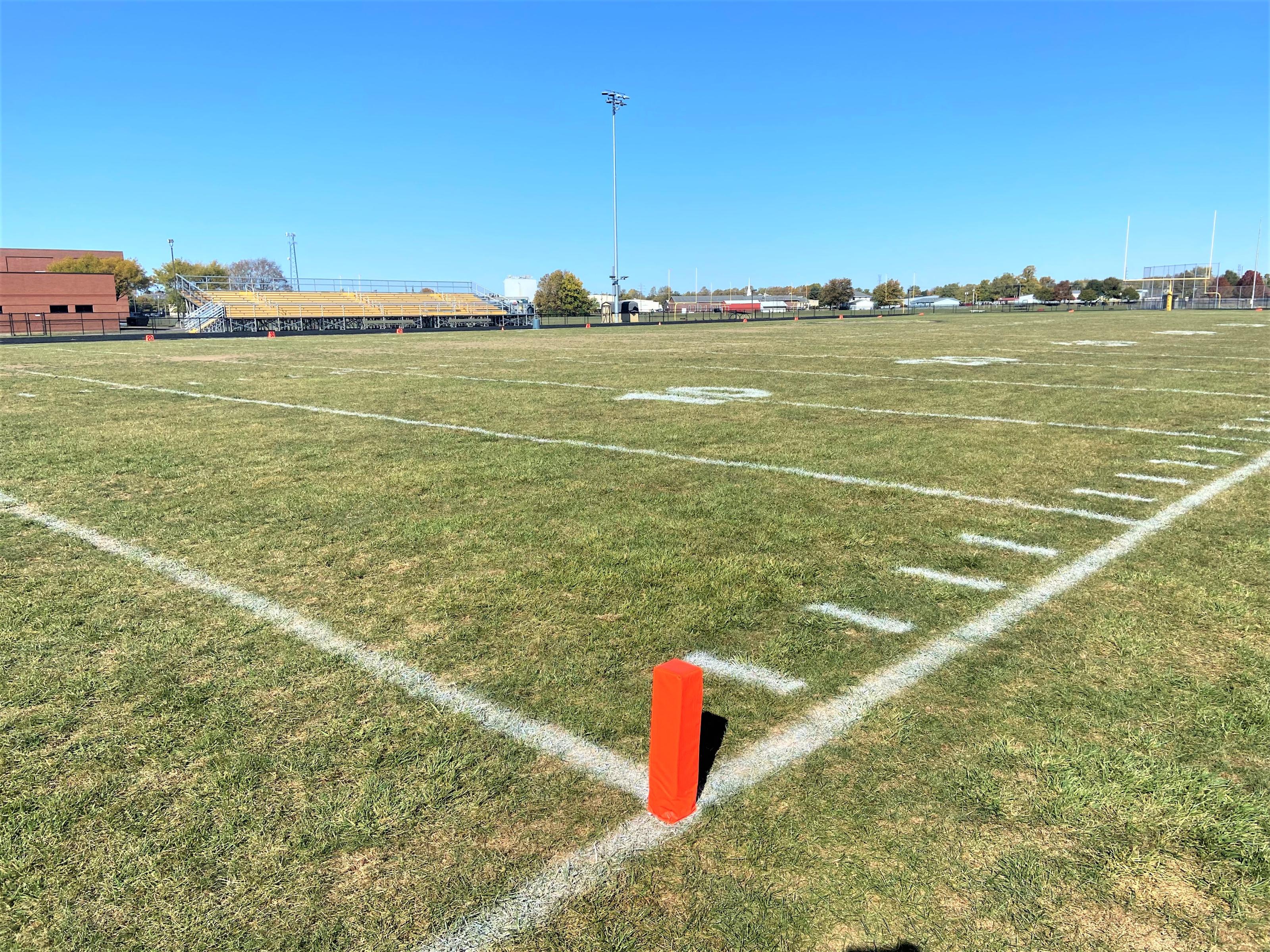 Head coach Pat Parks is Shelbyville’s all-time winningest football coach with 129 victories over the course of his 23-year career. Fifty nine of those wins came at McKeand Stadium.

The new synthetic turf will be in place at McKeand Stadium for the start of the 2023 season. It is a necessary enhancement and a nod to the wonders of technology. However, many former players and coaches will undoubtedly often reflect on their days competing on the natural grass of McKeand with fondness and a sense of pride that is measured in terms that extend well beyond wins and losses.

“That field will always be a place where I remember watching coaches and players understand how to compete; to overcome, learn valuable lessons and establish lasting relationships,” said Hearne. “That is what I see when I look at that old grass on McKeand. That field is very special to me.”