FAIRLAND – Class 2A, No. 5 Triton Central’s defense made a statement Friday against 2A No. 4 Indianapolis Scecina.

Time and again the Tigers’ defense stifled a Scecina offense averaging 37 points per game. And with the Crusaders pushing for one final score, the Tigers deflected a pair of passes and sacked quarterback David Mendez to put them in desperation mode.

Mendez dropped back on fourth-and-15 and heaved the ball as far as he could down the Scecina sideline. His receiver came up just short of hauling in a diving catch and the Tigers began celebrating a hard-fought 10-7 victory to collect the program’s fourth-consecutive sectional championship.

“This feels great,” said Triton Central senior linebacker Lucas Kleeman. “Going into halftime with a zero on the scoreboard felt great. Our defense was able to stop them the whole game. Coming out of the half, we had to trick our minds. We had the mindset that we were down by 10 and had to get stops.”

Kleeman lived out that mindset with an interception on Scecina’s first drive of the second half. The Crusaders consistently failed to sustain any offensive momentum throughout the game.

“That one touchdown hurt but we knew we were dominating the whole game,” continued Kleeman. “We knew we’ve been doing that this whole season. Last week, (Brownstown Central) ran it on us a little bit and we figured (Scecina) would think they could come out here and do that to us. We showed them that they couldn’t.”

Scecina finished with 49 yards rushing on 20 carries. And after completing 8-of-his-first-10 pass attempts for 90 yards, Mendez failed to connect on 12 of his final 16 attempts.

Only a 45-yard catch and run by Jacob Martin early in the fourth quarter provided Scecina’s points.

The Crusaders were stopped twice in the first half on fourth-down plays in the red zone.

Triton Central strung together a 14-play drive to open the game and closed it with a 30-yard field goal from Levi Dewey.

Scecina quickly stalled out on its first series and the Carter Nolan punt bounced off a Triton Central player which forced Brad Schultz to scoop it up and run. And run he did. The senior found a seam and got to the Scecina 28 before being tackled. 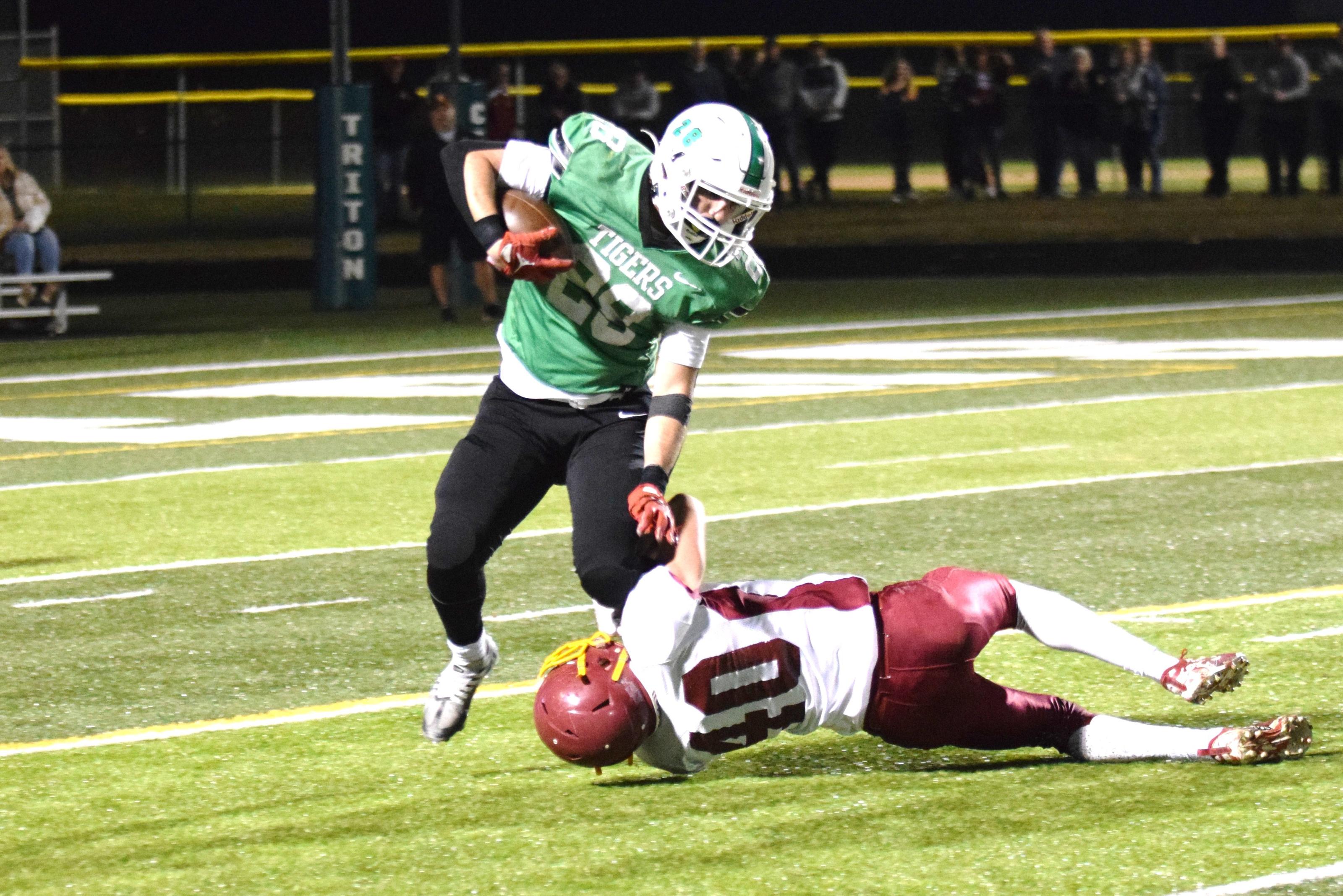 Five plays later, Ray Crawford (photo) crossed the goal line for what turned out to be Triton Central’s only touchdown of the night.

With the 10-0 lead, Triton Central stayed conservative on offense, opting to rely on Crawford to keep moving the chains and taking precious time off the clock.

Crawford turned 15 first-half carries into 56 yards and he continued to be the workhorse until late in the third quarter when he was tackled and didn’t get up.

The junior was helped off the field and never returned. Scecina’s next drive resulted in a touchdown and new life, trailing 10-7 with 8:45 left in the fourth quarter. 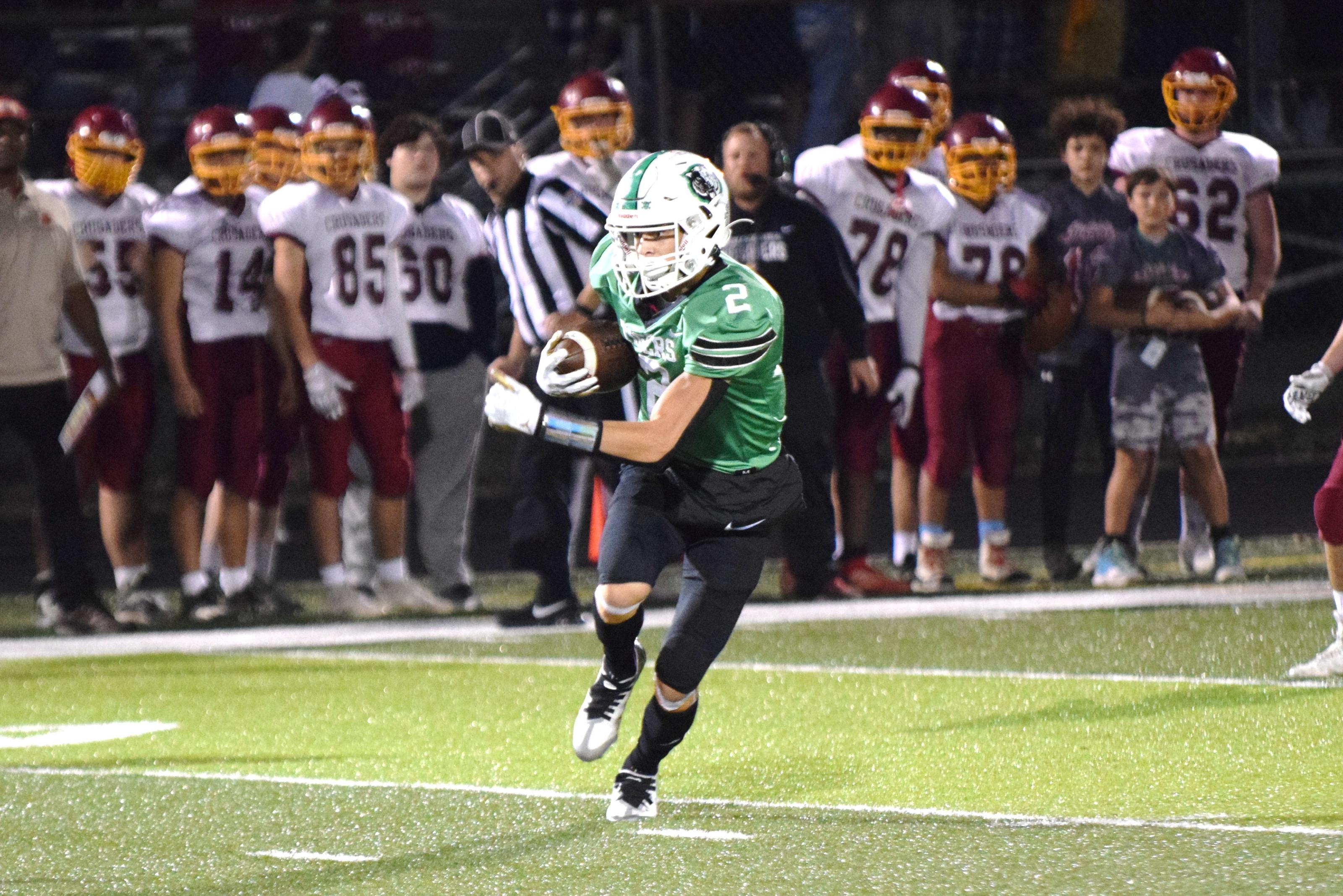 Triton Central needed a jolt and Brayden Wilkins (photo) was ready to be that lightning bolt. The junior took a pitch from quarterback Jace Stuckey on the first play after the touchdown and turned the corner up the Scecina sideline to race 36 yards and flip the field position.

“I knew I had to step up. I was the next person in line,” said Wilkins of his thoughts when Crawford was helped off the field with a lower leg injury. “I’ve been waiting all year to do it.”

With a little help from Schultz, Wilkins showed off his speed.

“Brad had an amazing block and there was one other kid and I knew I could outrun him,” said Wilkins. “I tried it and it worked. It put us in great field position.”

From there, Wilkins went to work churning up yards and clock. The junior got the next five carries and gained 20 yards down to the Scecina 9.

Stuckey pushed his way to a first down on fourth-and-1 to keep the drive going. Wilkins gained two more yards on his final carry of the night.

Stuckey went to the air on third down and his pass was incomplete in the end zone. He tried a quarterback draw on fourth-and-goal at the 5 and was stopped two yards later.

Scecina needed to flip the field over the final three minutes to steal the victory but Triton Central’s defense did not let that happen.

Scecina had won eight of its last nine meetings with Triton Central including a 21-20 overtime victory on Sept. 30. The redemption was sweet, according to Wilkins.

“This is great. And against Scecina … even better,” said Wilkins.

Wilkins finished with 69 yards rushing on 11 carries and had five receptions for 87 yards.

Triton Central will host fellow 2A No. 5 Evansville Mater Dei (9-3) in the regional championship next week, either Friday or Saturday depending on when travel arrangements are finalized.

While the celebration continued on the field, head coach Tim Able, who has led Triton Central to a sectional championship game in each of his 10 seasons in Fairland, settled off to the side along the fence. 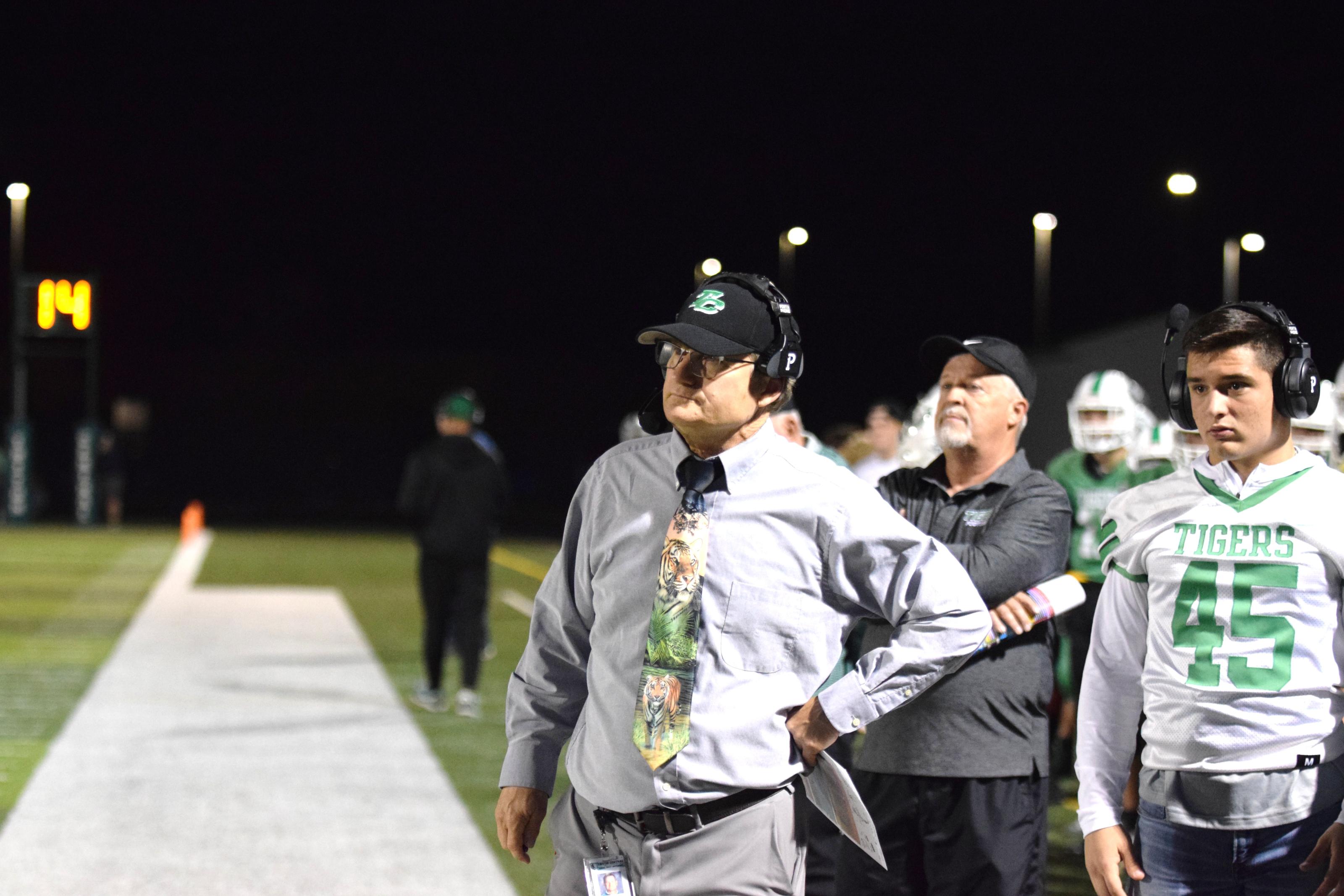 While he took great satisfaction with a win over Scecina and long-time coaching rival Ott Hurrle, Able (photo) was already turning his thoughts to another nemesis in Evansville Mater Dei.

“We have to play well. They are a good team that plays a lot of good teams,” said Able. “We have to regroup and be ready to roll.”

Able’s fifth sectional title at Triton Central comes with a little bittersweet feeling. The 2022 season is his first without his father present. Norman Able died Dec. 4, 2021. He frequently addressed the TC football team after games on Friday nights.

“My first year here, my mom (Roberta) passed and last year dad (passed),” said Able who showed off the underside of the brim of the cap he wore during the game. Mom and Dad were written in big letters. “Yeah, their presence was here tonight and all my family is here.”