The desire to play in the SEC overcame the want to play close to home.

“I have been waiting for this for a long, long time,” said Edwards. “It felt so good. I am ready to get down there and get to work.”

Edwards (photo), the daughter of T.J. and Mindy Edwards, announced her verbal commitment on Sept. 26, 2021, and made that choice official on the first day of the 2022 signing period.

The two-sport standout at Shelbyville, Edwards is closing in on the girls basketball career scoring record, wanted the challenge of playing in the top college softball conference in the country.

“The SEC obviously,” said Edwards of her decision to call Starkville, Mississippi home during her collegiate career. “And coach (Samantha) Ricketts, coach (Tyler) Bratton and coach (Josh) Johnson were my main decisions in going down there. It felt like home and they were going to take care of me being so far away. The campus and everything around it felt like home. I knew as soon as I got down there.” 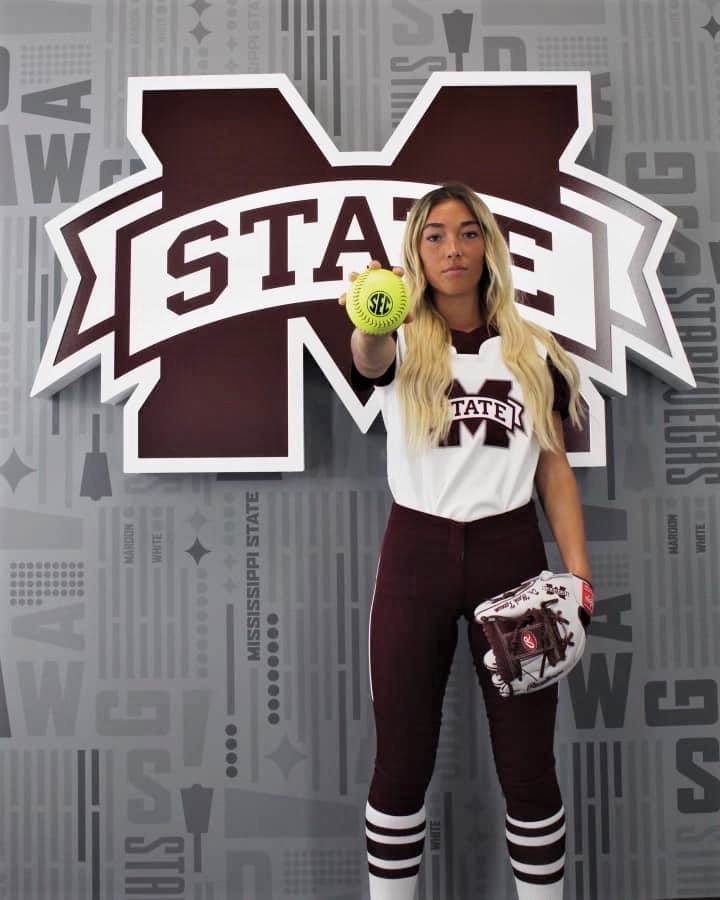 Mississippi State saw a middle infielder ranked in the top 20 nationally in her graduating class and expressed interest. That led Edwards to attend a camp in Starkville to learn more about the Bulldogs’ program.

“I didn’t really have a dream school,” said Edwards. “I just knew I wanted to play in the SEC. When I got on campus, I wanted to be there. There was no doubt.”

That led to her commitment to Mississippi State and the decision to pass on an opportunity to play just 90 minutes away in the Big Ten at Indiana University.

Now that her future is set, Edwards can fully concentrate on her final season as a Golden Bear basketball player and one last run with the Shelbyville softball program that reached the Class 4A Final Four in June.

“Probably my favorite softball moment was going through sectional and regional and making it to semistate. It was amazing,” said Edwards. “I hope we do that this year, too. It was an experience I will never forget.”

Edwards and the Golden Bears defeated Bedford North Lawrence, 4-3, on June 4 in the semistate afternoon semifinal round before losing to top-ranked and defending state champion Roncalli, 7-1, in the championship game.

Roncalli went on to capture back-to-back state titles behind pitching ace Keagan Rothrock, who signed her National Letter of Intent Wednesday to play at the University of Florida.

Knowing she is headed to the SEC in 2023, Edwards opted to join a high level Lady Dukes national travel softball team this fall to prepare herself for the next level of competition.

“I have already been to one tournament (in Houston, Texas) with them,” said Edwards. “I feel like it is a different level of competition. It’s basically preparing me for college. The girls I am playing with are playing in the SEC and Big Ten. It’s a bunch of big-time commits. It’s a lot of fun and it’s really challenging me.”

Rothrock is part of the same Lady Dukes squad.

Edwards lost her freshman season as a Golden Bear due to COVID-19 but has terrorized pitchers over the last two seasons. She is hitting .490 in 49 games with 102 hits, 26 doubles, nine home runs, 64 runs batted in, 87 runs scored and 31 stolen bases.

A strong senior season will push her into contention for the state’s Miss Softball Award.

And once it is all over, Edwards will be a freshman all over again.

“I think it will be better than my freshman year here because of COVID,” she said with a laugh. “I think I will just be happier to be down there.”