The Indiana Horse Racing Commission unanimously approved Indiana Grand’s modified request for race dates in 2020.  The 94-day season will beginon Monday, June 15th and finish on Wednesday, November 18th on a Monday through Thursday basis with four select Saturdays of Quarter Horse-only racing over the span of the meet.

Also approved as a part of the agenda was a request by Indiana Grand and the Indiana horsemen’s groups to offer what is believed to be the lowest takeout on any wager in North America.  The request asking for the Pick 5 to be offered at a takeout of 11.99% was also approved unanimously and will take place on the last five thoroughbred races each day.  The Pick 5 will be a straight carryover wager without a unique ticket provision.

“We’ve said for the last month that the 2020 calendar might need to be fluid and after consultation with our horsemen we’re happy to be approved for this 94-day meet.” said Eric Halstrom, Vice President and General Manager of Racing.  “When you consider that our business will have been shut down for nearly three months it’s very rewarding to offer overnight purses that are consistent or higher than 2019 and a quality stakes calendar for both breeds.”

Therevisedcalendarwill be published online at www.IndianaGrand.com shortly.  Horsemen are encouraged to contact Kevin Greely at (317) 421-3080 for more information or with questions on anyracingoffice matters.

Indiana Grand Racing & Casino has released its revised Quarter Horse Condition Book and Stakes Schedule for the 2020 season.  Both are contingent upon the approval of the Indiana Horse Racing Commission on the recently proposed racing dates of a 94-day season beginning on Monday, June 15 and finishing on Wednesday, November 18.

The interruption of business at Indiana Grand has caused numerous changes for the racetrack and horsemen but the 2020 Quarter Horse meet at the Shelbyville, IN facility will see increases over 2019 levels in the overnights and stakes program.  Purses have been raised by more than 15% on most overnight races and the stakes schedule will see a substantial increase as well.

“It’s truly remarkable that through a very difficult time our purses for the Quarter Horses at Indiana Grand will see an increase in 2020”, said Eric Halstrom, Vice President and General Manager of Racing.  “Continuing the upward trend in awards for our horsemen is very satisfying and well deserved.”

The revised Quarter Horse stakes calendar consists of 31 stakes worth $1.625 million in purses.  Included are four stakes races on October 24 that will make up the richest day of Quarter Horse racing during the season.  Those four stakes, including the $150,00 added Miss Roxie Little Futurity Final, for two year-old Indiana breds going 250 yards, will be contested on the final all-Quarter Horse Saturday racing program of the meet.

“We are very proud of the way our Quarter Horse racing has grown at Indiana Grand,” said Kevin Greely, Director of Racing.  “The quality of both the open horses and Indiana breds is improving every year and the stakes purses are indicative of that.  I expect that we’ll see the most competitive Quarter Horse racing in our history this summer and fall.”

The revised Quarter Horse condition bookand stakes schedule is published online at www.IndianaGrand.com.  Horsemen are encouraged to contact Kevin Greely at (317) 421-3080 for more information or with questions on any racing office matters.

Miles told JMV on 107.5 The Fan he and new Indianapolis Motor Speedway owner Roger Penske have been working diligently to make sure there is racing at IMS come July. With the shakeup in scheduling because of the coronavirus pandemic, NASCAR and IndyCar will be sharing track time at IMS Fourth of July weekend.

“The plans we’re looking at giving us a lot of confidence that the state could be, the city could be in Stage Five by that weekend,” Miles said. “By the middle of June, we’re going to have to have to say ‘we’re going with fans, and here’s how we’re going to do it.’

Miles said they have not made a decision yet on whether or not fans will be allowed to attend both the Big Machine Vodka 400 and GMR Grand Prix the weekend of July 4.

“But we’re going that race either way,” Miles said confidently. “The Xfinity cars, the Cup cars, and the IndyCars are going to be on this track one way or another.”

Even though live racing returned this week with NASCAR completing two races at Darlington Raceway, it’s a piece of good news the racing community certainly needs. Especially with the news that IndyCar has had to cancel two races this week.

IndyCar confirmed Thursday both races scheduled for Richmond, June 27, and Toronto, July 12 have been canceled.

“It doesn’t look like there’s going to be another opportunity this year for Toronto,” said Miles. “It’s so hard to set up a street race in a city like Toronto. To guess there is another time in the future you could do it is probably a bridge too far.”

Miles is still confident the IndyCar season will be a success with fourteen races still on the docket. He said in light of the canceled race at Richmond they will not be doing a double-header on the road course at Road America in Wisconsin.

Indiana Grand Racing & Casino has released its revised Condition Book and Stakes Schedule for the 2020 season.  Both are contingent upon the approval of the Indiana Horse Racing Commission on the recently proposed racing dates of a 94-day season beginning on Monday, June 15 and finishing on Wednesday, November 18.

“These unprecedented times have given us many challenges yet some opportunities as well.” said Eric Halstrom, Vice President and General Manager of Racing.  “We’re grateful to Churchill Downs for including our signature stakes’ in the Kentucky Derby qualifying points system in this unique year.  And while it will be a different on-track experience when holding the race on a Wednesday afternoon we think it’s the best spot to avoid conflict with other important 3-year old races and maximize handle opportunities on the national racing scene.”

The revised thoroughbred stakes calendar consists of 34 stakes worth $3.2 million in purses.  Included on the stakes schedule is the newly named Jonathan B. Schuster Memorial Stakes.  The race, named in honor of the longtime and very popular General Manager of Indiana Grand, will be a turf event on the stakes rich July 8 card.  In addition the Indiana Bred and Sired horses will have plenty of chances to run for stakes quality purses as 28 of the stakes will be designated for their program.

“We had to make some tweaks to the previously released stakes calendar in order to account for the condensed meet and interruption in our business,” said Kevin Greely, Director of Racing.  “But we’re happy to bring back our overnight races at 2019 levels and only needed slight modifications to the stakes program to do so.  We’ll see how some of these changes fare in 2020 and use that as a basis for our overnight and stakes program in 2021.”

Therevised condition bookand stakes schedule will be published online at www.IndianaGrand.com and www.equibase.com.  Horsemen are encouraged to contact Kevin Greely at (317) 421-3080 for more information or with questions on anyracingoffice matters.

Starting the week of May 18, most DNR Division of Fish & Wildlife-owned shooting ranges will begin to reopen.

All facilities will be following COVID-19 social distancing and cleaning requirements. Restrictions will reduce the number of recreational shooters on the shooting ranges at a given time.

Atterbury Fish & Wildlife Area’s shooting range will open by appointment only May 15-17 and resume normal operating hours the week of May 18. Shooters wishing to schedule an appointment should call 812-526-6552.

For the most up-to-date information on DNR’s response to COVID-19, including what is open and closed, visit on.IN.gov/dnrcovid19.

After receiving approval from the Indiana Horse Racing Commission, Indiana Grand Racing & Casino will begin to reopen its barn area in full on Monday, May 11.  The utilization of the entire racetrack property is a precursor to the kick off of its 18th season of Thoroughbred and Quarter Horse racing.  Revised racing dates with an opening day during the week of June 14 will be announced in the next week.

Horsemen will be assigned days and times for arrivalto ensure an orderly entrance into Indiana Grand beginning on Monday, May 11.  Horses located in Indiana will be preferred for a move in to the barn area that will house more than 1,000 horses when at capacity.  Full training operations on the one-mile dirt surface will commence on Wednesday, May 13.

“We are pleased to be able to accommodate our loyal horsemen by fully opening our barn area,” said Mike Rich, Senior Vice President and General Manager. “The suspension of our 2020 meet has been difficult for everyone and we appreciate the Governor, Eric Holcomb, and the Indiana Horse Racing Commission staff for their guidance.  We look forward to racing in the near future in a manner whereby we willtake every precaution to ensure the health and safety of our employees and horsemen.”

The 2020 racing program was scheduled to be 120-days of racing beginning on April 14 with the highest total of purse money available in the history of Indiana Grand.  With the closure of the OTB, Casino and Sports Book on Monday, March 16 the racing season was suspended indefinitely.

“This is a significant step towards starting our 2020 racing season,” said Eric Halstrom, Vice President and General Manager of Racing.  “Our racing department has beenworking on new plans for the meet including a new calendar and revised stakes schedule.  We will announce those changes in the next week.”

Alterations to the previously released condition bookand stakes schedule will be published online at www.IndianaGrand.com shortly.  Horsemen are encouraged to contact Indiana Grand Director of Racing, Kevin Greely, at (317) 421-3080 for information on all arrival and racing matters.

The IHSAA issued a statement allowing for the resumption of school sponsored activities on July 1. 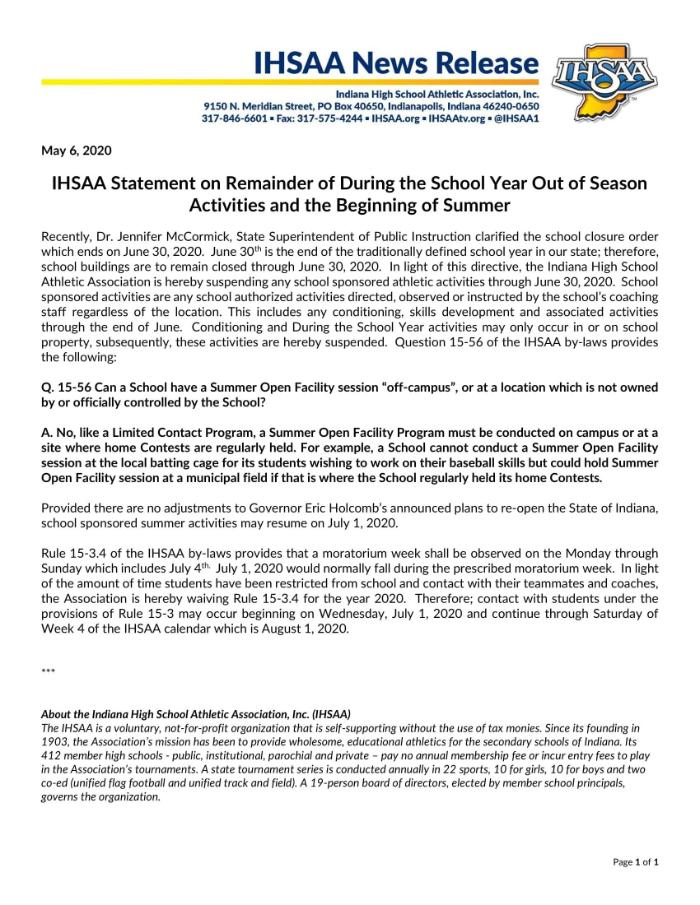