Posted About One Year Ago by Submitted article

Stu is a veteran of the United States Army and a recipient of both the Bronze Star and Army Commendation Medal with Valor for serving our country during his yearlong tour of combat duty in Afghanistan. During his time stationed in the mountains of Paktika Province, Stu fought the Taliban and worked with local Afghan citizens to create stable communities. In addition to serving on the battlefield, he also served stateside as a counterintelligence special agent preventing threats to U.S. national security.

A fifth-generation Decatur County resident, Stu was born in Greensburg, Indiana where he gained his love of country and Christian faith. He now lives in the same Greensburg family home where his grandparents lived when he was a young boy, and along with his wife Maureen, is raising two young sons – the sixth generation of Hoosiers. 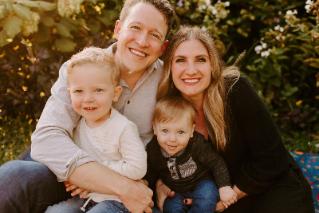 “When I served on the battlefields of Afghanistan, we always put our fellow soldiers and the mission before ourselves,” said Stu Barnes-Israel. “Today, in our nation’s capital, the only people the liberal career politicians seem to want to serve are themselves. We have real work to do. We have to stop the out-of-control spending and runaway inflation that is wrecking our economy. We have to fight back against government overreach and defend our Hoosier values. We have to secure our border and make our cities safe again. I’m not a career politician. I know what it takes to keep us safe and grow the economy. When I saw Joe Biden’s disastrous exit from Afghanistan and his reckless spending plan in action, I knew it was time to step up and serve my country again. I’m going to Washington to fight for the America First agenda, to put hardworking Hoosiers first, and to defend our conservative values.

“In Afghanistan, our hut had a quote etched on the wall that said – adversity reveals genius, prosperity conceals it. Our country today is seemingly facing adversity around every corner, but America has always revealed its genius in times of crisis and our generation will be no different. When it comes to our economic policies, we need to start thinking beyond just the date of the next election and instead implement a strategy that plans decades into the future by ensuring good paying jobs in the 9th Congressional District and dominating China in the race to lead the economy of the future. Since Joe Biden has been in office, countries like Russia and China have decided to test America’s resolve in Ukraine and Taiwan. President Trump knew that a strong America is best for the world, and we are now seeing the result of a weak America under Joe Biden.”

“In Congress, I will remind the career politicians every day that they are not somehow above the people they represent and that they need to adhere to the same standards they set for the rest of the country.”

Stu Barnes-Israel is a U.S. Army combat veteran and a fifth generation Hoosier. In 2016, Stu completed his Army service and continued his education, ultimately earning his MBA in 2018 from the Wharton School at the University of Pennsylvania. After graduation, Stu used his military experience and business education to work with some of our nation’s largest businesses to grow and create American jobs. By doing so, he helped these American companies compete with countries like China and win in the global economy.