Posted About Six Months Ago by Jeff Brown

Jacob Barrett carries himself with an underlying sense of confidence bolstered by a strong family support system.

Goodwill Industries International recognized that character trait and requested he be nominated a second time for one of its national awards.

Barrett’s perseverance is easily described. He has overcome hearing and vision problems as well as learning difficulties and socialization issues just by being more determined not to give up.

Presented a certificate of completion in 2014 from the Indiana School for the Blind and Visually Impaired and told by a counselor that obtaining a high school diploma was not an option, Jacob believed that was not good enough.

That’s when Goodwill came into his life.

“If you were drowning in the ocean, they are a lifeline,” said Barrett when asked what Goodwill means to him. “They are an incredible lifeline and life changer for many, many people. I can’t stress that enough. They have changed a lot of people’s lives just by caring and wanting to help people.”

Barrett was one of the first enrollees at Goodwill’s new Excel Center, a tuition-free high school for adults, in Shelbyville in 2016. He was determined to get a high school diploma.

That process was not easy, though. Barrett failed to complete a math course three times. What he didn’t do was quit.

“I am so proud of Jacob for having the perseverance,” said Michelle Barrett, Jacob’s mother. “A lot of people, if you don’t pass a test three times, how many will say I will take it a fourth time?

“Sometimes that is a lot harder than being somebody that is successful all the time. It is harder to fail and get up and do something again than always being successful.”

In 2018, Jacob donned the Excel Center’s green robe and cap and participated in a graduation ceremony where he received his high school diploma – all while maintaining and growing in responsibility at Shelbyville’s Goodwill store where he first learned about the Excel Center possibilities.

Now a full-time employee with benefits and a 401K, Jacob is enjoying the life he has created and looking at post-secondary educational opportunities.

Goodwill Industries International recognized Jacob had an amazing story to tell. Earlier this month, he received Goodwill’s 2022 Achiever of the Year award at the company’s Delegate Assembly in Toronto, Canada.

“This particular award, the Achiever of the Year, recognizes an individual who has overcome significant barriers to achieve and maintain employment,” said Jenny Kakasuleff, Marketing & Communications Manager for Goodwill.

Goodwill Central and Southern Indiana is one of approximately 160 entities within Goodwill Industries in North America. Each group is asked to nominate an individual for the award. At the urging of Goodwill, Barrett was nominated for the Achiever of the Year award for a second consecutive year.

“I’ve been with Goodwill for six years and this has never happened, they have never contacted me and said re-submit that person you submitted last year,” explained Kakasuleff. “This year, they contacted me and wanted me to re-submit Jacob, so I guess he was one of the top two or three last year and they selected another candidate. We re-submitted him and he rose to the top this year.”

Barrett was surprised at work by his family with the news he won the award.

“What’s going on? Am I in trouble?” were Jacob’s first thoughts. In fact, it was the opposite.

“I think Jacob is a very inspiring individual,” said Kakasuleff. “He has some challenges but he has never let anyone say, ‘No, you can’t do that,’ even when it came to graduating high school. He accepted a certificate of completion at the time but he knew he wanted to graduate from high school.

“When he learned Goodwill was opening an Excel Center I think he was one of the first students to enroll there. He took the math (assessment test) four times before he was finally able to pass it. So I think people are just inspired by his grit and perseverance and his desire to breakthrough all of his challenges.” 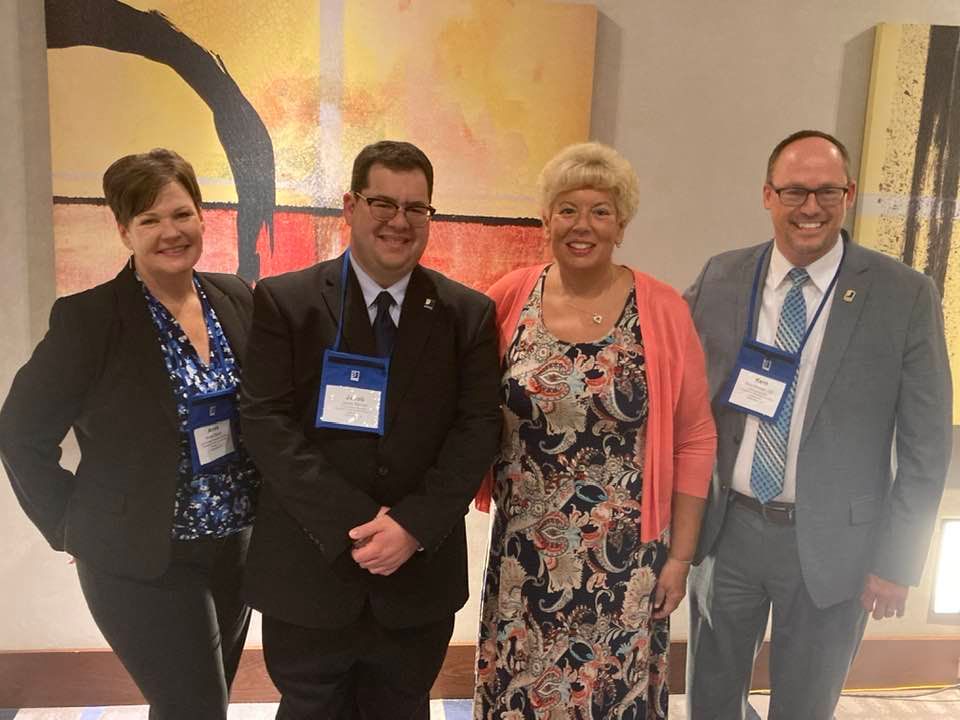 Jacob Barrett, second from left, of Shelbyville, recently received the Goodwill Industries International “Achiever of the Year” award in Toronto, Canada. Barrett was joined for this photo by Susan Sheets, second from right, of the Shelbyville Excel Center, and Anne Davis (far left) and Kent Kramer (far right), the leaders of Goodwill of Central and Southern Indiana.

The Barrett traveling party to Toronto included Michelle and her husband; Jacob’s father, Bryan Barrett and his sister; and his brothers, Lucas and Nathan, who traveled with his wife.

“Goodwill welcomed all of us with open arms,” said Michelle.

“Jacob’s most prominent qualities are his grit and determination. For Jacob, it’s not a matter of whether he can do something, but rather what steps will he take to get there,” said Kent Kramer, President and CEO of Goodwill of Central & Southern Indiana, in a media release. “His resilience and ability to bounce back again and again after failure is laudable and something few are willing to do. He carries within him a deep-rooted sense of optimism and hope that he can overcome any challenge he chooses to commit to and work for.”

Jacob is employed as a Goodwill Production Specialist responsible for identifying and shipping high-value items to Goodwill of Central & Southern Indiana’s ecommerce facility to support the growth of online sales. When he is not working, Jacob competes for Special Olympics in basketball, swimming, softball and corn hole.

“If you have special abilities, not every employer will accept you as you are,” said Michelle. “People sometimes want you to fit into the norm instead of being willing to meet you where you are at. Goodwill is an organization that meets people where they are at and lifts them higher up.”

So what does the Achiever of the Year award mean to Jacob?