A combination of confirmed flu cases and cases of flu-like symptoms has resulted in a call for virtual learning at Morristown Jr. Sr. High School starting Tuesday.

In a letter sent out today by Shelby Eastern Superinitendent Dr. Todd Hitchcock information was released about a high number of illnesses compounded by even more students who were sent home from school Monday.  Indiana Code requires the school district to consult with the local and state health department anytime absences exceed 20% on a given day.  Dr. Hitchcock said the school had achieved that threshold by the end of the day.

With that, a transition to virtual learning is now planned for Morristown Jr. Sr. High School only on Tuesday and Wednesday.  Staff will properly clean and disinfect the school and it's hoped symptoms and cases will subside in that time.

The decision also impacts all extra-curricular contests, meetings and events for those two days.

Students should not return to school until they have been fever-free for at least 24 hours.

Again, the virtual learning on Tuesday and Wednesday only impacts Morristown Jr. Sr. High School.  No other Shelby Eastern schools are impacted at this time. 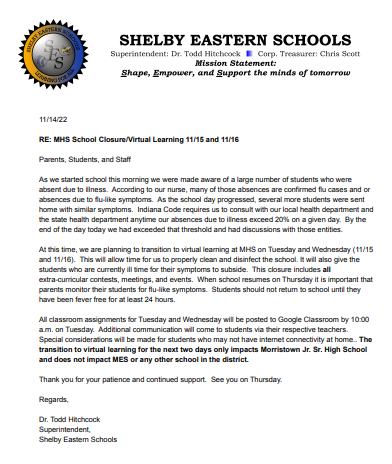