A pair of Triton Central graduates squared off at the University of Evansville this past weekend.

The Loyola Ramblers raced out to an 18-2 lead Saturday and never looked back in defeating the Evansville Aces for the second straight day. Loyola improved to 9-6 this season after a 67-49 victory Friday and a 61-31 win Saturday at Meeks Family Fieldhouse in Evansville, Indiana.

Riley Stephens, also a 2020 Triton Central graduate, had two points, one rebound and one steal Friday against Loyola and one point and two rebounds Saturday for the Purple Aces (5-11).

The Ramblers return to action with games Friday and Saturday against the University of Northern Iowa in Cedar Falls, Iowa.

The Purple Aces travel north to Valparaiso for games Friday and Saturday. 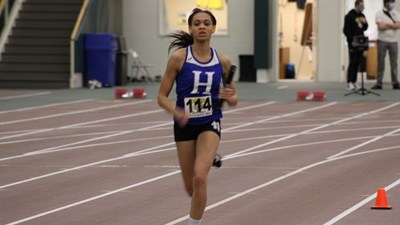 Zaleeya Martin was named the HCAC Athlete of the Week after her record-setting performance Friday night for Hanover College.

The Shelbyville graduate solidified herself as her conference’s top sprinter with a record-setting performance Friday at the Friday Night Spikes indoor track and field meet hosted by Rose-Hulman University.

The Hanover College sophomore won the 60-meter dash in 8.0 seconds to break the school record. She also teamed with Alijah Craig, Makenzie Carroll and Alexis Gerke to win the 800-meter relay in 1:57.74.

She will compete Saturday in the HCAC Indoor Championships.