The positive energy was palpable Tuesday night at McKeand Stadium at Shelbyville High School during the Golden Bears’ football camp for youth in grades 1-6.

Four stations, each with over 20 participants, were overseen by coaching staff and current Golden Bears. Each taught specific, basic skills in a fast-paced environment.

Meanwhile, new head coach Brian Glesing paced up and down the field overseeing all the action.

“Come with a smile, leave with a smile,” said Glesing in a hoarse voice about the goal of the camp. “We want football to be a positive influence in their lives and have a great experience. 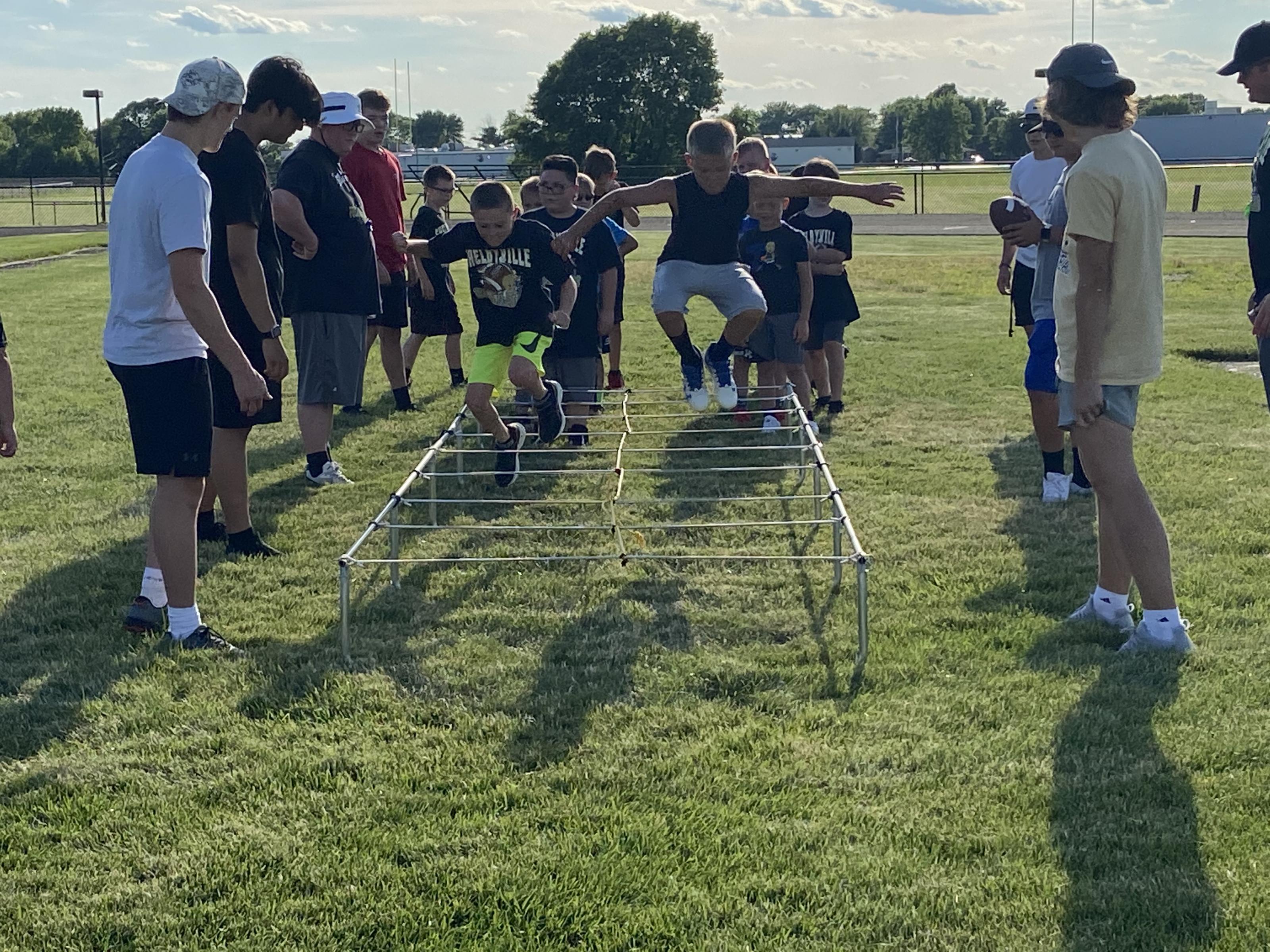 Nearly 100 campers participated Tuesday night, the second of the three-night camp that concludes tonight at the Golden Bears’ football stadium.

“That’s why we have this field,” said Glesing of staging the camp at McKeand Stadium rather than the practice area behind the middle school. “We want to get the parents to see what’s going on. They need to understand that the kids can trust us and that we can trust them and develop those relationships. That’s the whole goal.

“Me being new, I don’t know a lot of people in the community. I’m still the new guy so I am learning names and meeting parents. That’s how you build a program. It’s long term and that’s what we are looking for.”

Glesing is no stranger to rebuilding football programs. He has amassed 119 wins in 18 seasons which includes creating successful programs at LaVille, Clarksville and Floyd Central.

The veteran coach knew exactly what he was signing up for when he accepted the job at Shelbyville, which has won one game in the last three seasons.

“I started in February and in just those four months, we’ve come a long in a sense of attitude, effort and character,” said Glesing after Tuesday’s camp. “That’s the foundation we are looking for.

“We understand where we are at and I think our kids understand that. They want to build that foundation, not only for this season but for future teams. I think our kids are buying into that. We are not going to have a lot of them but they understand it takes work. The kids are figuring out they have to buy in for it to pay off in the end.” 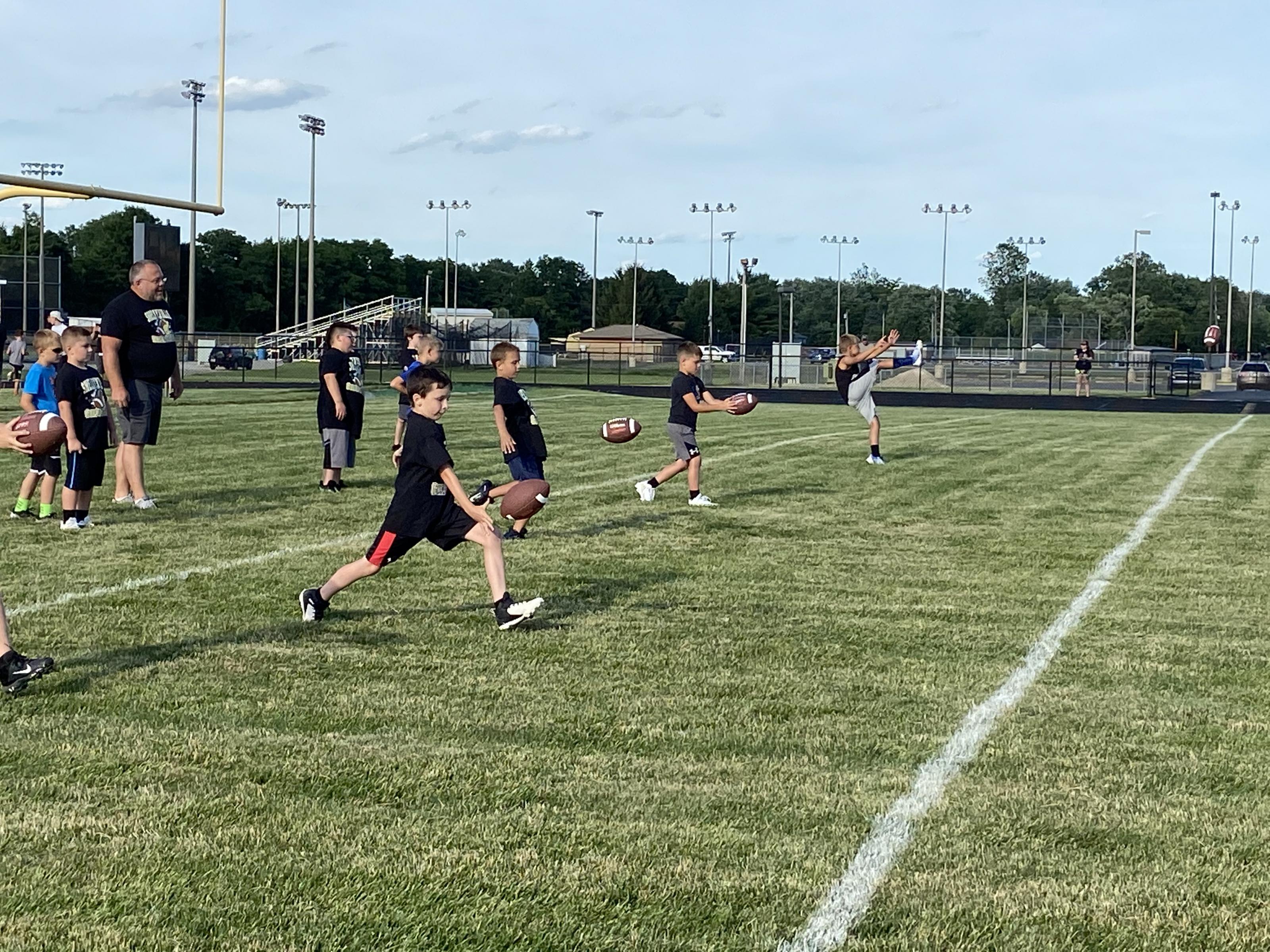 Michael Clevenger was hired in 2018 to replace longtime head coach Pat Parks. Clevenger’s three-year run ended this past season with a 1-29 record. The Golden Bears were outscored on the field, 527-51, last year.

So the administration turned to Glesing, a Franklin Central graduate who has spent the majority of his coaching career in southern Indiana, to rebuild the program his way.

Glesing has no organized team practices or 7-on-7 workouts scheduled with any other high school football program. He also has no plan to get his players into pads during the month of July.

“We will do a lot of teaching because not only is it new to our players, it’s new to my coaches too. Everybody is learning a whole new system.”

There is one change to the Golden Bears’ schedule in 2021. Franklin, Shelbyville’s week two opponent, was dropped with Richmond, 1-8 last season, filling that slot. The Red Devils will be the home opener for the Golden Bears on Aug. 27.

Then Shelbyville has seven straight weeks of Hoosier Heritage Conference opponents, which makes the rebuild that much tougher.

“This is a tough situation because we play in such a tough conference,” said Glesing. Four of the eight teams won at least seven games last season. “There are no cupcakes. It’s going to be tough but I think the community, the parents, the players, the staff and the coaches are buying in to what we are doing.

“Our success may not be measured in wins and losses. It really will not be. We want to win a game or two … that’s the goal. In four months our attitudes have changed. The kids are developing those habits to have a successful program.”