Reeling from four straight routs at the hands of the Hoosier Heritage Conference’s best, Shelbyville needed an uplifting performance with the sectional opener one week away.

With a revamped offensive line and a host of players to carry the ball, the Golden Bears kicked its offense into high gear Friday night from one 20-yard line to the other. If not for red zone difficulties, Shelbyville could have entered the fourth quarter in a fight with Pendleton Heights.

Instead, Shelbyville did not score a touchdown until the game’s final play and lost 35-7 to close out the regular season with a 1-8 record.

“That’s been a problem all year when we’ve gotten down there, even in the earlier games,” said Shelbyville head coach Brian Glesing. “We get it down the field and the defense starts taking away our bread and butter. Then you have to do something else.

“I’m really proud of our guys. I thought we moved the ball. We made some position changes here and there and that gave us a big boost.”

The Golden Bears will host Bedford North Lawrence (5-4) Friday in the Class 4A, Sectional 23 opener at McKeand Stadium. 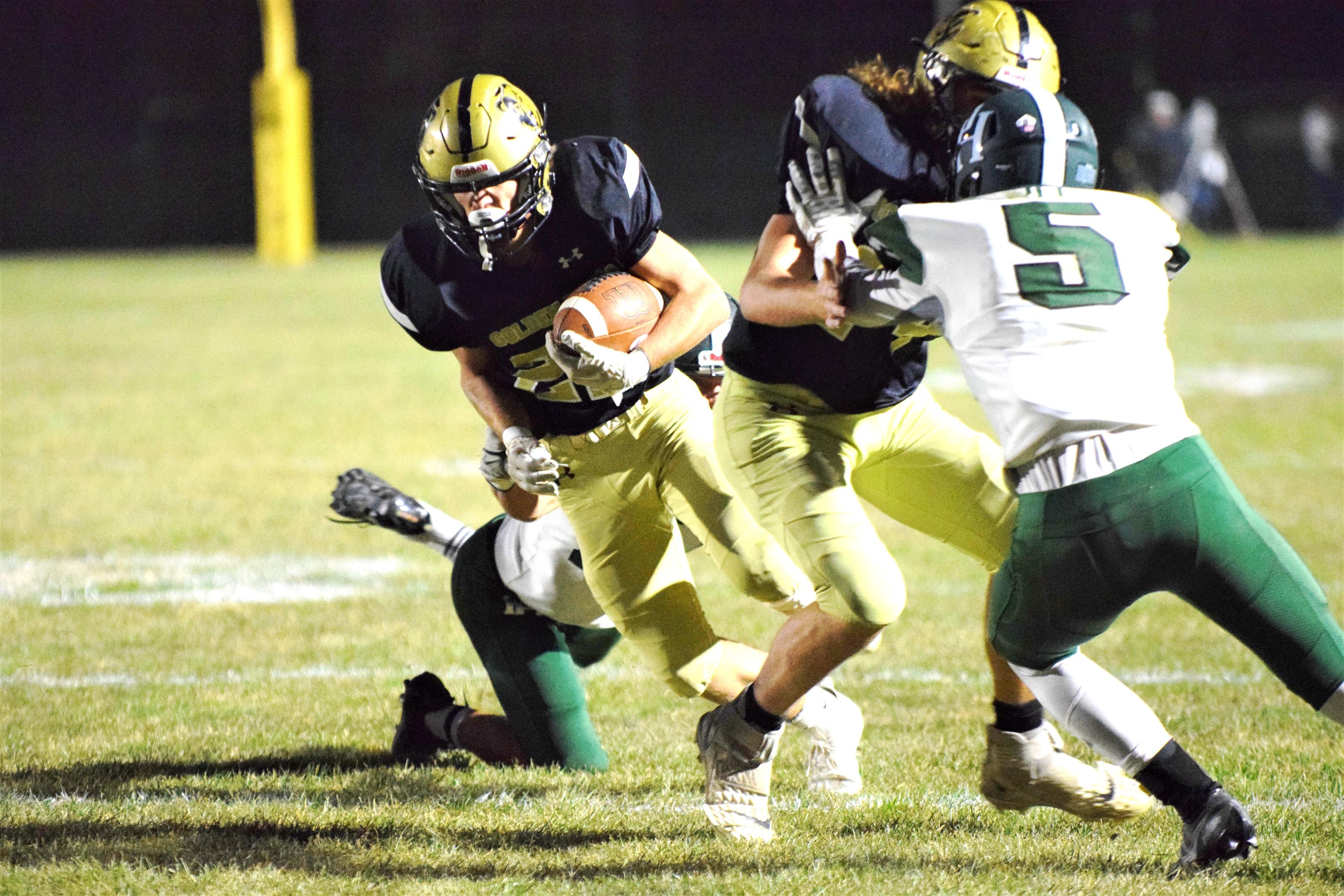 On Senior Night, Shelbyville carried the ball 52 times for 315 yards but all four first-half drives ended in Pendleton Heights’ territory with no points on the scoreboard.

“We had freshmen and sophomores on (the offensive line),” said Glesing with enthusiasm. “I think our kids are starting to buy in to our offense a little bit. You saw some little tweaks where we have two or three capable ball carriers back there so were not a one-horse show there.”

The Golden Bears (1-8, 1-6 HHC) flipped the field on its opening possession with a 39-yard run from sophomore Keagan Turner, making his first varsity start in the backfield. A 7-yard run from Cael Lux set up Shelbyville with second-and-three at the Pendleton Heights’ 5-yard line.

Four plays later, Pendleton Heights quarterback Isaac Wilson heaved the ball down the Shelbyville sideline. Caden Sims had the ball drop into his hands over the outstretched arm of Grant Schene and the junior wide receiver raced to the end zone for an 82-yard touchdown strike that made it 14-0.

“That was right in front of me too,” said Glesing of Sims’ catch. “(Grant) was in perfect position. It’s just one of those things where it takes a perfect throw and a perfect catch. What’s neat is we were in the right position.

“We kind of changed up our coverage a little bit this week, putting in a little more press out wide on their wide receivers and I thought our guys did pretty good. I am anxious to see the film on it. That play was one of those things where we are there and just didn’t make the play. The good news is we are there and as we get more experienced, we will start making those plays.” 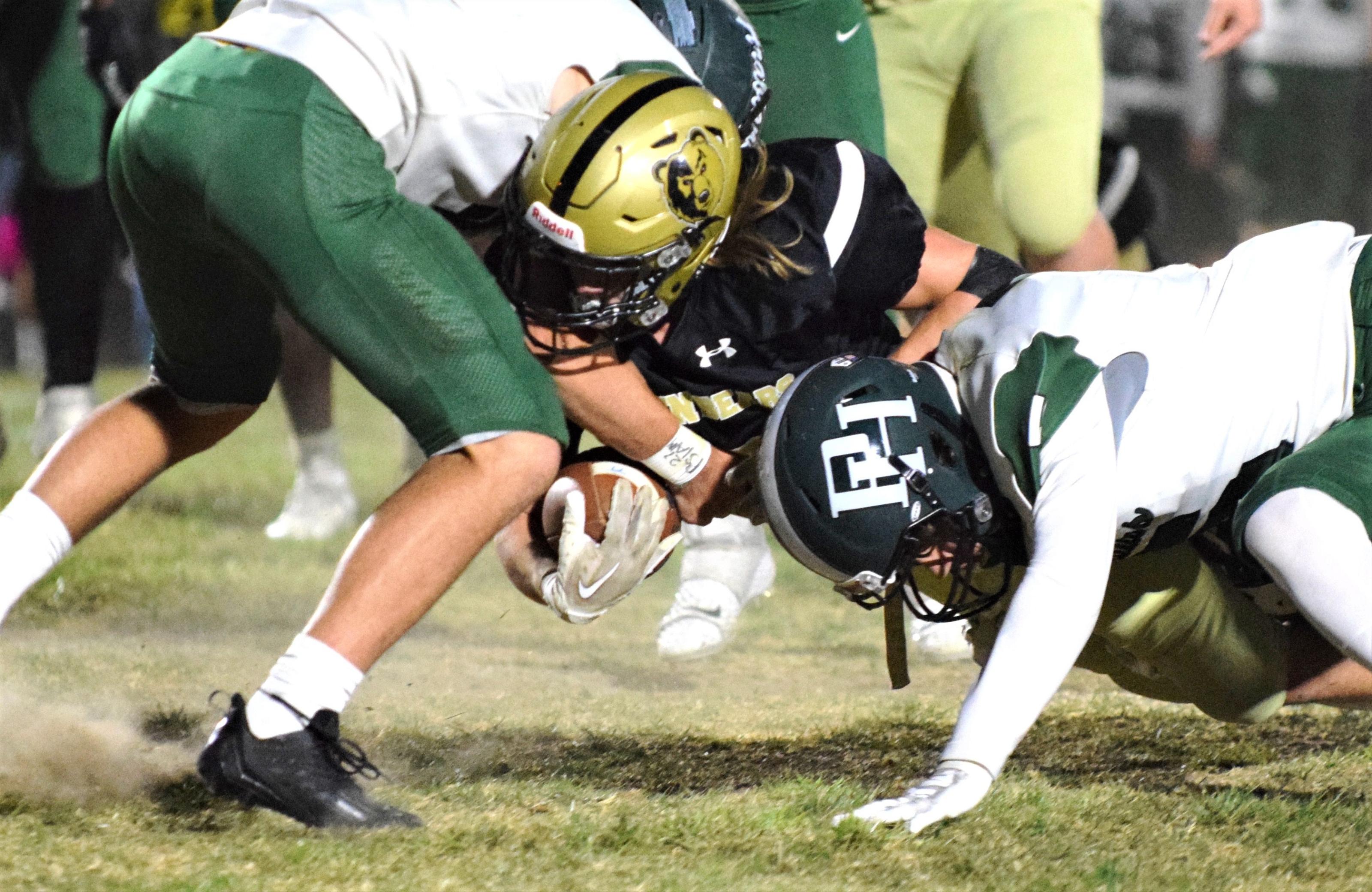 Shelbyville’s next drive started at its own 37 and lasted 17 plays before stalling out at the Arabians’ 12. Aiden Helfer-Vazquez’s 27-yard field goal attempt did not get high over the line and hit the bottom crossbar.

Shelbyville’s Donovan Martin recovered a fumble on Pendleton Heights’ next play from scrimmage and the Golden Bears had a third scoring opportunity. But the offense was called for another false start on fourth-and-3 at the 16. After moving five yards back, Shelbyville quarterback Eli Chappelow’s pass fell incomplete.

Three prime scoring opportunities and no points. Meanwhile, the Arabians added a Wilson 5-yard scoring run to take a 21-0 lead into halftime.

Pendleton Heights intercepted Chappelow on the third play of the second half and Wilson added a 6-yard touchdown run to his night to make it 28-0.

Wilson scrambled for a 56-yard scoring run late in the third quarter to give the Arabians a 35-0 lead. The junior quarterback ended with 83 rushing yards and three TDs while completing all eight of his pass attempts for 136 yards.

Shelbyville had four backs accumulate at least 50 yards in the loss.

Luke Jackson led the way with 104 yards and Shelbyville’s only touchdown – a 5-yard plunge that followed a 34-yard run.

Turner finished with 69 rushing yards while Jordan Marcum had 60 yards and Axel Conover had 50.

“We got a little momentum to build on,” said Glesing. “It’s been tough the last four weeks. It’s tough to motivate at practice. The kids start getting the 1-8 blues. As a coaching staff, it’s our job to get them motivated every week. Our captains got to keep up the intensity, the emotion and the enthusiasm at practice.

“I thought we had a good week of practice, and it showed. Defensively, that’s where our weaknesses show a little more, but offensively, we executed the game plan the way we wanted to.”