Shelbyville has produced one winning season in the last 15 years.

Head coach Becca Hoefler (photo), now in her fourth season with the Golden Bears, has the program trending in the right direction after seasons of 4-20, 8-15 and 11-12.

Having a Division I athlete like Kylee Edwards to build around has raised expectation levels for the program. The dynamic guard scored a program-record 45 points in Shelbyville’s season-opening 73-53 win over Brown County Tuesday.

Edwards, who will sign her National Letter of Intent this week to play softball collegiately at Mississippi State University, is closing in on Shelbyville’s career scoring record of 1,418 points set by Gretchen Haehl, who was named an Indiana All-Star after her 2004 senior season.

“It’s amazing. I never thought I would get here my freshman year,” said Edwards after the record-setting performance that leaves her 240 points short of breaking the career mark. “It’s unbelievable. I can’t believe I’m really close to it, but I’m not really thinking about it. I’m just looking at a sectional championship.”

Edwards knows a little something about postseason success. She helped Shelbyville’s softball team to sectional and regional titles earlier this year and was one win away from reaching the Class 4A state championship game.

Many years ago, Edwards opted to make basketball her main focus.

“In elementary school, I was going to hang up softball and go play basketball,” she explained. “I played one season of AAU and said that’s not for me and went back and started playing softball, traveling everywhere for softball as I got serious about it.”

Edwards loves both sports too much to quit one. Even after announcing her verbal commitment to Mississippi State, she never wavered from continuing her basketball career.

“I think my love for basketball is the same as my love for softball but I felt like I could pursue softball more in my future than in basketball,” she said. “Why give up the sport that you love when you can only play it once?”

Edwards knows there are a limited number of basketball games left in her career. She intends to be thankful for each and every opportunity, especially after a summer softball knee injury left her senior year on the hardwood in doubt.

“This fall, I was still recovering,” said Edwards. “About four weeks ago I got fully back when I got cleared. It was up in the air during the summer if I was going to play this season or not.”

As if the tough-as-nails guard didn’t already have the spotlight on her from every opposing coach, scoring 45 points in the season opener only heightens the desire to shut her down. And that dictates Hoefler’s need to use her star in multiple ways.

“Obviously, she won’t score 45 every game,” said Hoefler. “If she does, I’m sitting pretty for this year.

“We are looking to manage her and put her in different spots this year so she doesn’t have to be the main guard bringing up the ball. … We are just going to manage where Kylee can play at and what is the best effective role for her.”

Edwards has great chemistry with junior guard Ava Wilson (7.7 points, 3.9 rebounds). The duo are consistently looking to set up defenders for back-door cuts to the rim.

“We love a good back door, especially with Kylee because a lot of teams are going to overplay her,” said Hoefler. “She will get face-guarded a lot this season. We’ve been working on hitting that back cut with the pressure. That goes with having guards that are able to handle the ball a little more.” 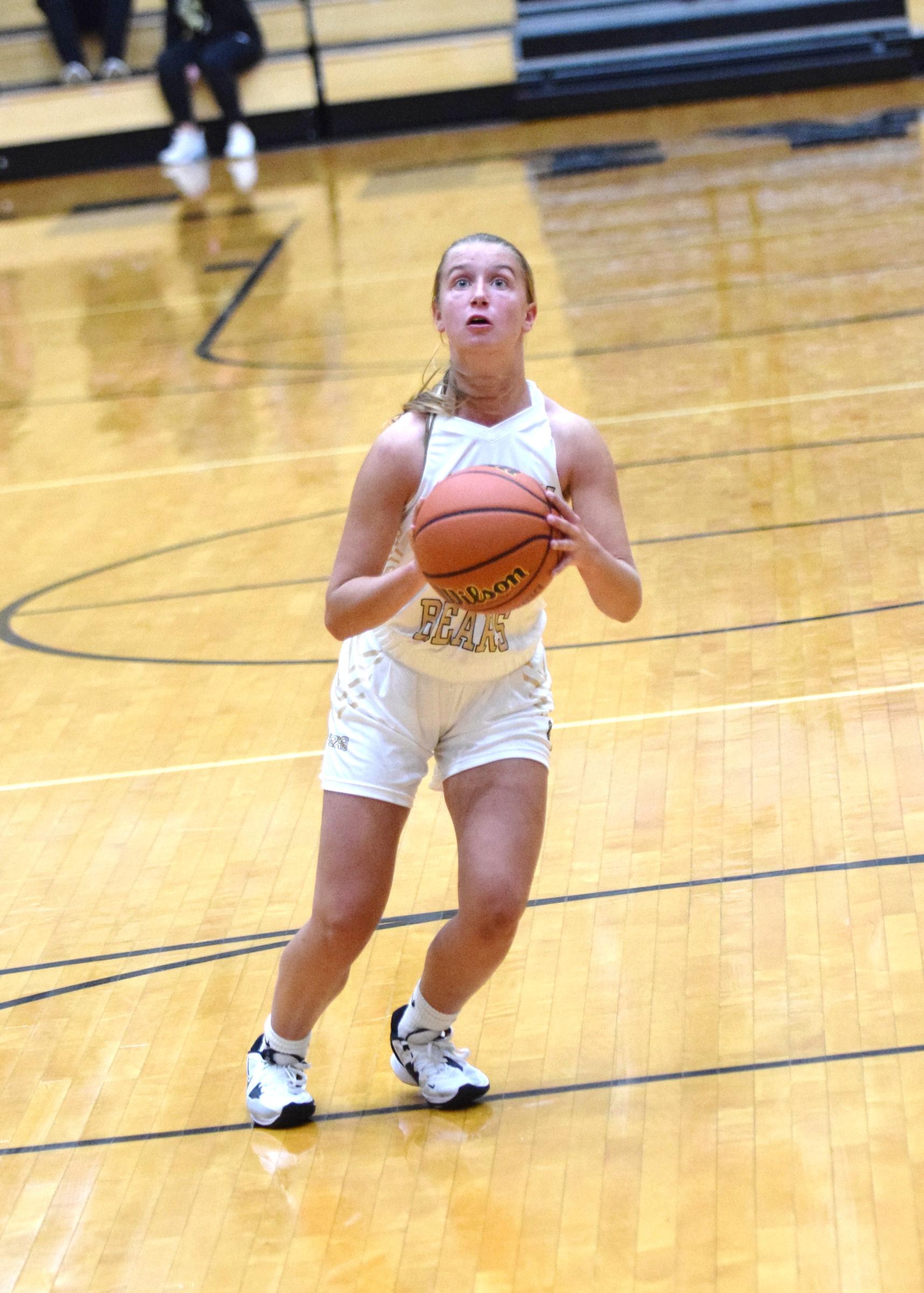 Senior Abby Brenner (4.3 points, 2.9 rebounds) and junior Ellie Simpson (photo) give Hoefler more options to push the pace as does freshman Ellie Keller, who had a successful junior varsity and varsity debut against Brown County.

“Ellie is strong, aggressive and her motor does not stop,” said Hoefler of the freshman guard. “She does not stop. I have to pull her back more than I have to tell her to go. When you have a player like that, you don’t want to hold them back when their motor goes, goes, goes.

Keller scored 13 quick points in the first quarter of the JV game Tuesday then followed that with an 11-point, 7-rebound game in her varsity debut.

With Wilson and Keller on the floor, Edwards admits she doesn’t feel the need to be the top scoring option all the time.

“This year, I’m just playing my game and having fun with it because it’s my last season,” she said.

Hoefler has senior Hailey Pogue, who just committed to play college softball at the University of Indianapolis, and juniors Lilly Johnson and Ella Johnson to battle in the low post.

Ella Johnson had seven rebounds and two steals in the win over Brown County.

For Shelbyville to produce its first winning season since 2016, it will need a strong start against smaller-school opposition. The Golden Bears will not face a 4A squad until its Hoosier Heritage Conference opener at Pendleton Heights on Nov. 26.

Shelbyville has not started a season 3-0 since the 2004-2005 season when it won its first four games for head coach Michael Gaines.

The Golden Bears will try to match that this week with road games at Waldron (0-1) Tuesday, Edinburgh (1-1) Friday and a home game Saturday against Morristown (0-2). Neither Edinburgh nor Morristown have JV teams this season.